What Is Thunderbolt 4 and Should We Care?

Thunderbolt 4 is the next version of Thunderbolt. It’s available today for some PCs, though not yet for Macs.. To learn more about this new protocol, and its impact on media creators, I spoke with Larry O’Connor, CEO of OWC, a leading Mac hardware manufacturer.

NOTE: All images are courtesy of Intel. 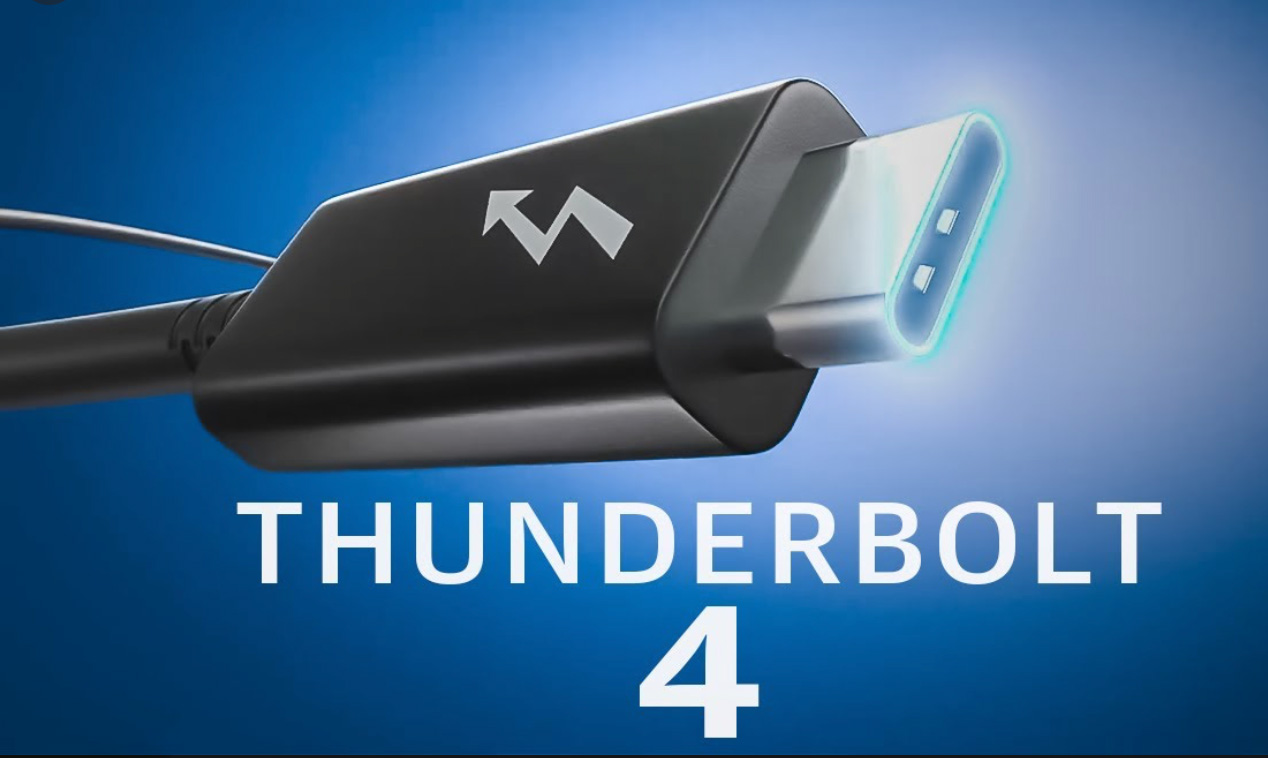 Larry Jordan: What is Thunderbolt 4?

While Apple implemented Thunderbolt 3 in the fullest way, that is not the case with PC/Windows. There are multiple, different, allowed implementations that are possible for PCs as Intel pushed to see broader Thunderbolt adoption. The result is an inconsistent experience between different PCs listed as having Thunderbolt or being Thunderbolt-ready.

For example, a PC described as “having Thunderbolt 3 support” didn’t mean you had the full capabilities of Thunderbolt 3. It might only have 20 Gb/s of bandwidth, no power-delivery, more limited video support, need an add-in card, etc

Larry O: A new chipset was released for Thunderbolt 4 in Tiger Lake. This is technically the 3rd chipset release built on the Thunderbolt 3 foundation. We have had Alpine Ridge, Titan Ridge, and now the Thunderbolt 4-version labeled “Goshen Ridge.” While they have some overlapping capability, not any one of these chipsets obsoletes the other. In the case of Goshen Ridge, this chipset is designed to allow, for the first time, Thunderbolt hubs. OWC is pleased to have introduced the world’s first Thunderbolt 4 hub at the end of September.

Like other chipsets before it, OS updates provide needed support to utilize them on the host/computer side. We look forward to updates that will expand the systems that use the Goshen Ridge chipset. We know having multiple Thunderbolt ports from a single host port has been long awaited and makes managing Thunderbolt devices a lot better – especially if you want to use a bunch of bus-powered devices. 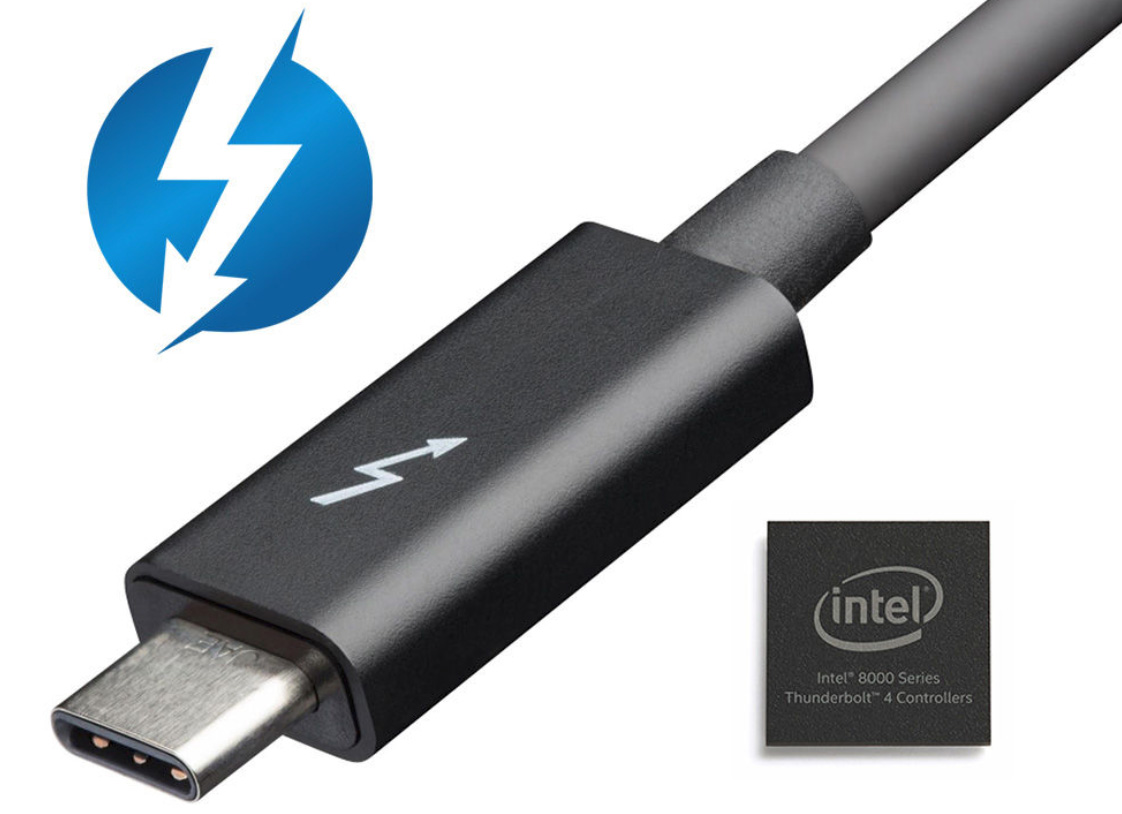 Larry J: What about cables – can we use the Thunderbolt 3 cables we already have?

Larry O: A new, universal, Thunderbolt 4 cable is also part of this evolution. New cables, which will start to become available around the end of the year, will end USB-C “cable hell.” Thunderbolt cables, today, are a complete mess. Let me give you some examples.

Currently, USB-C cables don’t support Thunderbolt and most don’t even support full USB 10 Gb/s data speeds. For example, the cable that Apple includes with its laptops only carries USB data at USB-2 480 Mb/s speed, not even USB-3 5 Gb/s!

Again, Thunderbolt 4 cables are truly universal and will work at maximum speed no matter if used with a USB C or a Thunderbolt interconnection.

NOTE: One other biggie is that, while all Thunderbolt 3 and 4 cables are rated for 100 watt computer power-delivery, there are a ton of USB-C cables in the market today that are NOT safe for power-delivery. (For the record, OWC has only offered power-delivery rated and certified USB-C cables.)

Wow! Thunderbolt cables are a mess for USB-C right now! It took me longer to explain cables than everything else. The majority of technical support calls that involve our Thunderbolt and USB-C devices come down to the cable the customer is using. The #1 incorrect assumption is that Apple’s USB-C to USB-C cable was full-speed. Instead, it’s primarily for power and just supports the minimum USB-2 speeds, when connected to a data device.

The good news, to put this all into one sentence, is that Thunderbolt 4 cables will universally provide the fully-rated interface speed and power that host and device support. 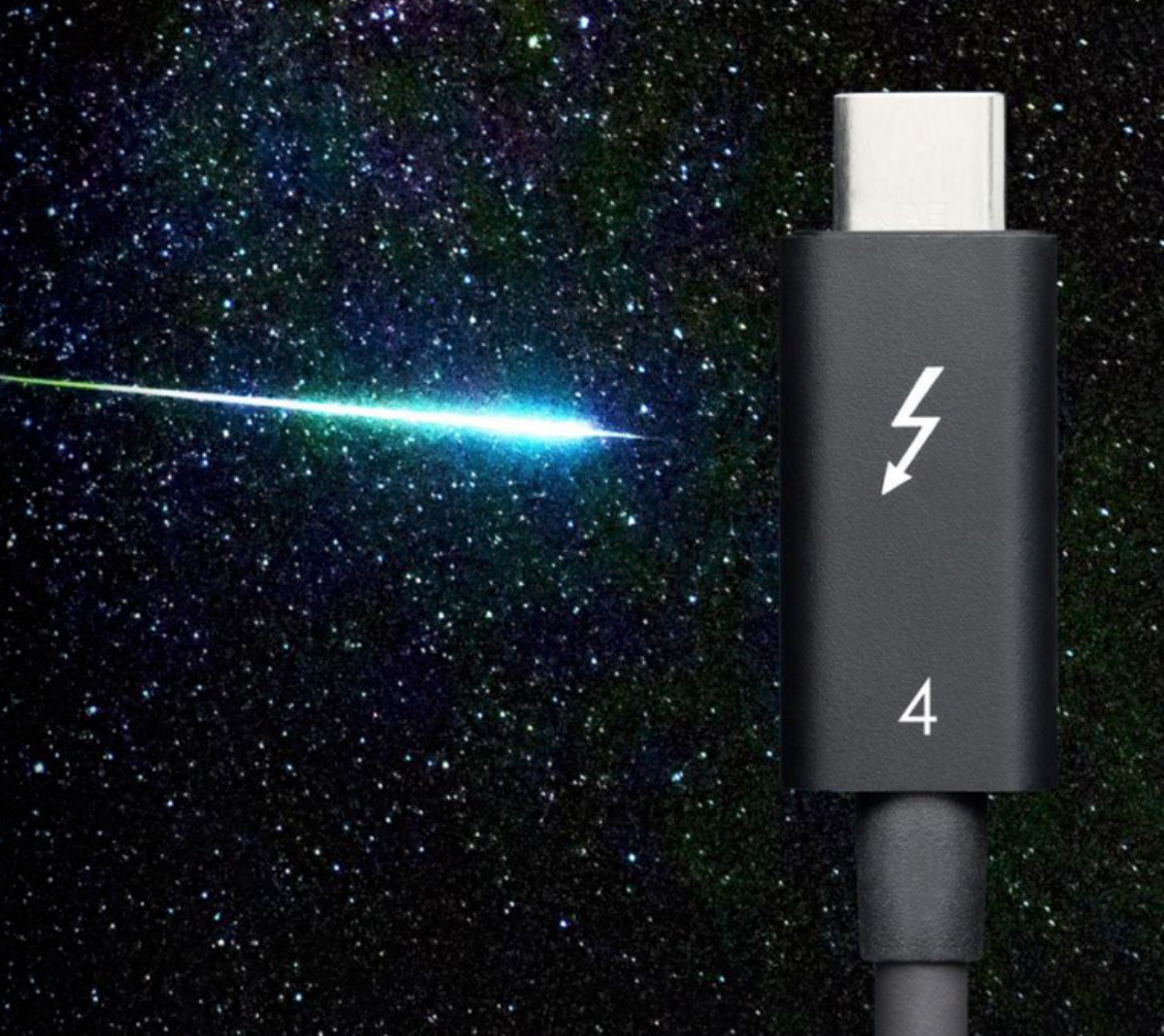 Larry O: Ha, it isn’t! Apple has always implemented the full capability of Thunderbolt 3 with 40 Gb/s, among other capabilities that were “optional” on Windows PCs. Thunderbolt 4, as now advertised on PCs, is no faster than Thunderbolt 3 is on a Mac.

However, while Thunderbolt 4 still has the same 40Gb/s performance capability as Thunderbolt 3, the only case where it’s faster would be compared to a partial 20 Gb/s implementation on a PC – or on a cable where there are passive 1M and longer Thunderbolt 3 cables that provide only 20Gb/s. This really isn’t about what Thunderbolt 4 is vs. Thunderbolt 3 speed though.

Larry J: If it isn’t any faster, what are the benefits of Thunderbolt 4?

Larry O: The biggest advantage is user expectation and experience with Thunderbolt-equipped PCs. What you have experienced on a Mac or certain PCs will now hold true for any PC with Thunderbolt 4. Across all your Thunderbolt 3 Macs and to any Thunderbolt 4 PCs, the full capabilities of the device will be present and utilized.

Intel could have called it Thunderbolt 3.1 and pulled a USB-org on us. I think we will have some short-term confusion over this Thunderbolt 4 marketing position and after that will move on. It means a lot more in the PC space – as a line in the sand.

Larry J: Why is being a standard important?

Larry O: Many of us use our devices between multiple systems or even swap computers into entire work flow setups to collaborate and get things done. Between not having to worry about cables or if a certain system will work right with certain hardware – that’s time saved and time is the most expensive commodity on the planet, one that doesn’t stop for anyone.

Larry J: Will Apple and Intel still be involved in reviewing Thunderbolt devices prior to release?

Larry O: Both Apple and Intel remain involved in the approval and certification of Thunderbolt devices and host implementations.

Larry J: What’s the difference between the Mac and Windows versions of Thunderbolt 4?

Larry J: Can we upgrade existing hardware to Thunderbolt 4?

Larry O: Mac users already have, at a hardware level, everything that Thunderbolt 4 promises will be there when a PC/Windows box says it has Thunderbolt 4.

Larry J: What else do we need to know about Thunderbolt 4?

Larry O: I think that’s most of it. The biggest thing is to understand that Thunderbolt 4 doesn’t replace Thunderbolt 3. The new Thunderbolt 4 chipset doesn’t even support the capabilities and performance that Titan Ridge and Alpine Ridge “Thunderbolt 3” badged chipsets enable for peripheral solutions. Thunderbolt 4 adds standardization, the new hub capability for external peripherals, and just makes Thunderbolt better for everyone.

Larry J: What are OWC’s plans for Thunderbolt 4?

Our hub has been released for Thunderbolt 4 Windows PCs – we look forward for updates that will allow using it with Thunderbolt 3 machines, however, we need to defer to those computer makers for their plans. I should add that it is possible for PCs with Thunderbolt 3 to be updated to support the Goshen Ridge chipsets – but that’s entirely up to the makers of the different computers.

In general, as we have been for the better part of the last decade – OWC will remain at the forefront with the best solutions and selection of Thunderbolt devices to meet and exceed the needs of our customers. Always certified, always built to last and perform.

Larry J: Thank you, Larry, for your time. I learned a lot!

Larry O: I’m glad we could talk about this now. What a shifting sandbox all of this has been since the CES Thunderbolt 4 introduction! I look forward to watching the major computer manufacturers roll-out their support for Thunderbolt 4.

10 Responses to What Is Thunderbolt 4 and Should We Care?