UPDATE: The initial release of object tracker in FCP 10.6 did not operate reliably or well. That changed in the 10.6.1 update. Speed and accuracy improved, though jitter is still a concern. 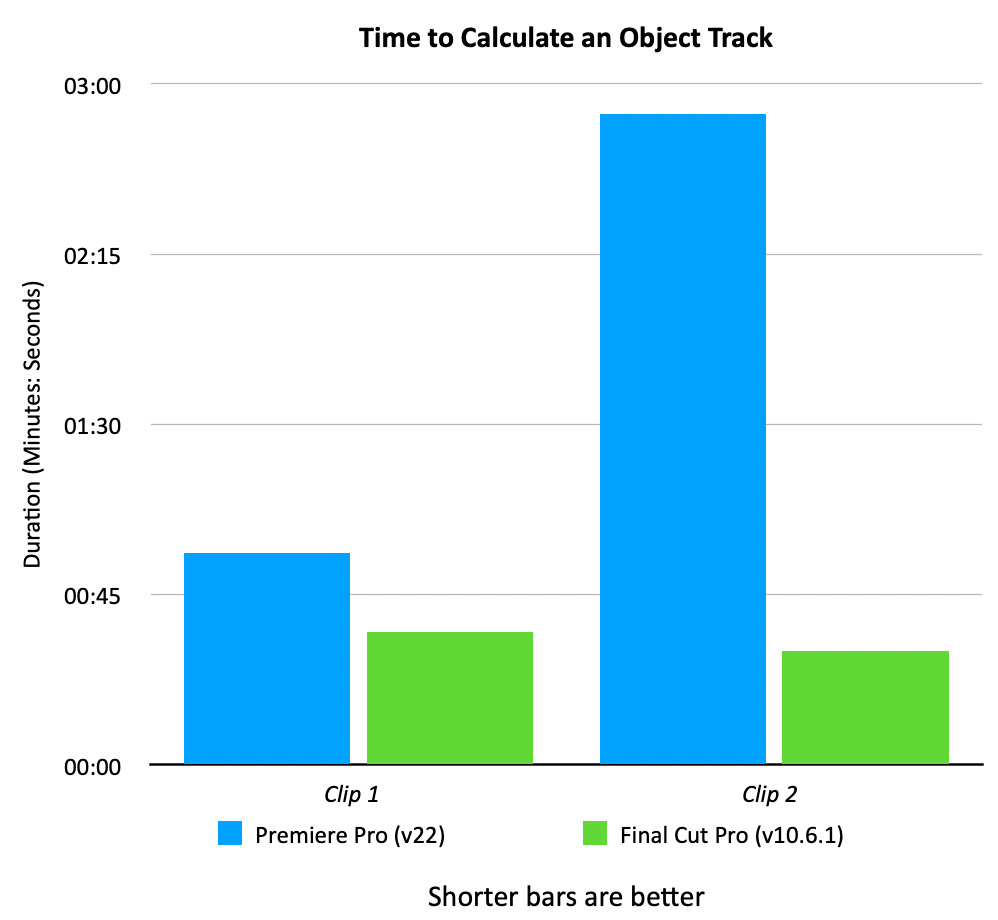 In the latest release, FCP is significantly faster than Premiere when running in Automatic mode as the chart above illustrates. Switching to Machine Learning accelerates the track even more; though the speeds you see will depend upon the computer system you are running on.

NOTE: The chart above illustrates the time it took to calculate an object track in two different clips. The duration of Clip 1 was 13:11 (seconds:frames), while Clip 2 ran 48:06. Depending upon the content of the clip, creating a track can even be faster than real-time.

While Premiere set the initial standard for track speed, accuracy and smoothness, the latest version of Final Cut exceeds Premiere in speed and accuracy, though tracks in FCP tend to have a few more jitters than Premiere.

The 10.6.1 update finally makes this feature both useful and useable.

With the release of Final Cut Pro 10.6, Apple added a powerful, and long-wished-for, object tracker that allows text or other elements to move in sync with objects that are moving in the frame.

“When you drag a clip (such as a title, generator, or still image) or an effect to the viewer, Final Cut Pro suggests an object or area of pixels in the background clip (known as a reference pattern) to “lock onto” as the object moves across the viewer.

In addition to tracking movement, point cloud will identify how the reference pattern changes from one frame to the next. For example, how it scales, rotates or distorts.

Machine learning uses a bounding box to identify the reference pattern and can track people, animate or other common objects. On M1 Macs with an Apple Neural Engine, machine learning is greatly accelerated.

UPDATE: Based on recent tests, I recommend using Automatic or Machine Learning. I was not able to get good results using point cloud. 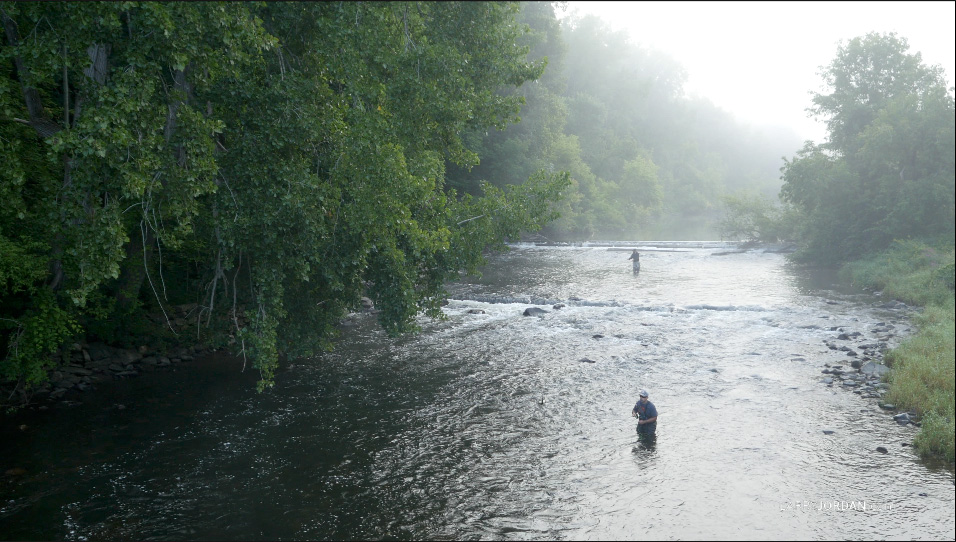 To get started, add the clip containing the content you want to track (the background image) to the timeline. In my example, I have two men fly-fishing in the Berkshires in a drone clip shot by Terry Holland. (Thanks, Terry!)

Make sure the Timeline playhead is positioned at the start of this background clip – or at the point where you want the object tracking to start. 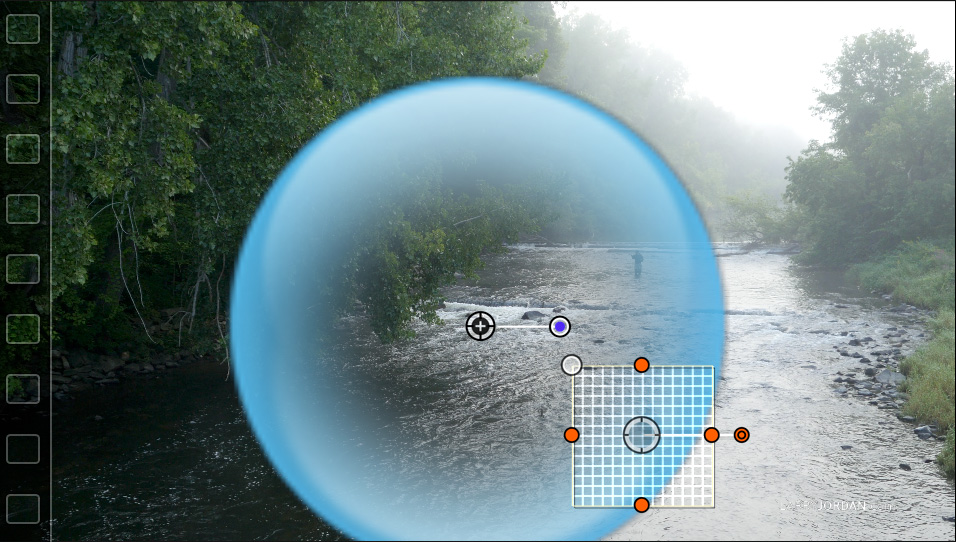 Next, import the clip you want to move (the foreground clip) into the Browser. Then, drag the clip – NOT into the Timeline, but into the Viewer. When you do, a small white rectangle, along with a green icon, appears. (The green icon doesn’t show in this screen shot.)

Drag the rectangle on top of the object you want to track. In my example, it is the fisherman in the foreground.

NOTE: I decided to emulate Glinda, the Good Witch of the North, and put our fisherman in a blue bubble that moves with him. 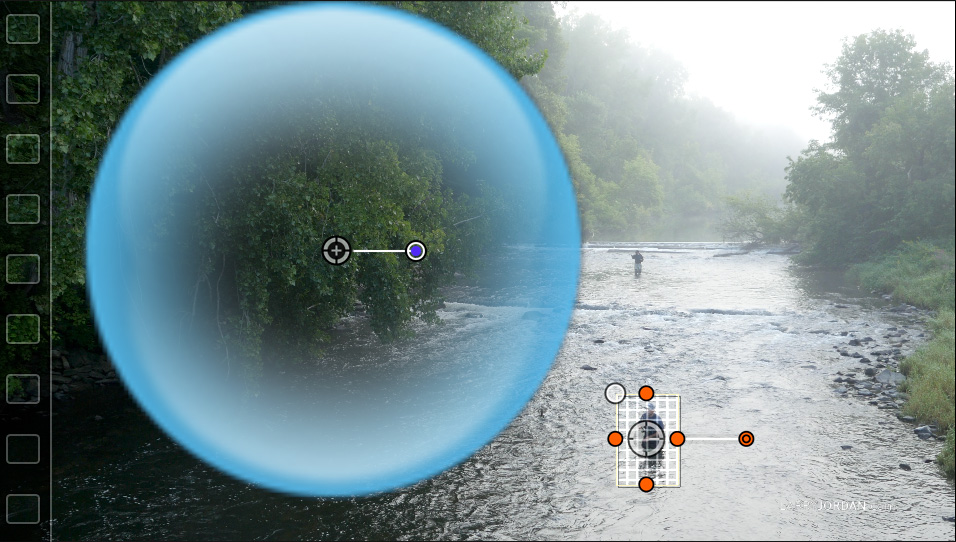 NOTE: If the bounding box selection gets too wide, Final Cut will try to track non-essential elements (in my case, water ripples) which will mess up the effect. Tighter is better. An object with a clear contrast with the background will track best. 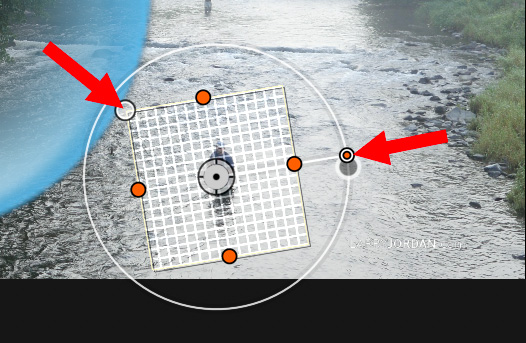 The outside red dot on the right controls rotation. The small white dot in the top left alters the shape from a rectangle to an oval. The four red dots along the edges of the rectangle determine the horizontal and vertical size of the rectangle.

When the tracking rectangle is properly sized, select the top (foreground) clip. Size and position this clip until it is located where you want. In my case, I’m putting the fisherman is in the bubble. You can put the foreground element anywhere in the frame.

When the foreground is properly positioned, look at the top of the Viewer. You should see new tracking controls.

NOTE: If these controls don’t appear, click the Transform icon in the lower left corner of the Viewer to turn them on. Remember, these controls only appear when the foreground clip is selected.

After a few seconds – the speed depends upon the speed of your computer along with the duration of the clip – the analysis is complete. 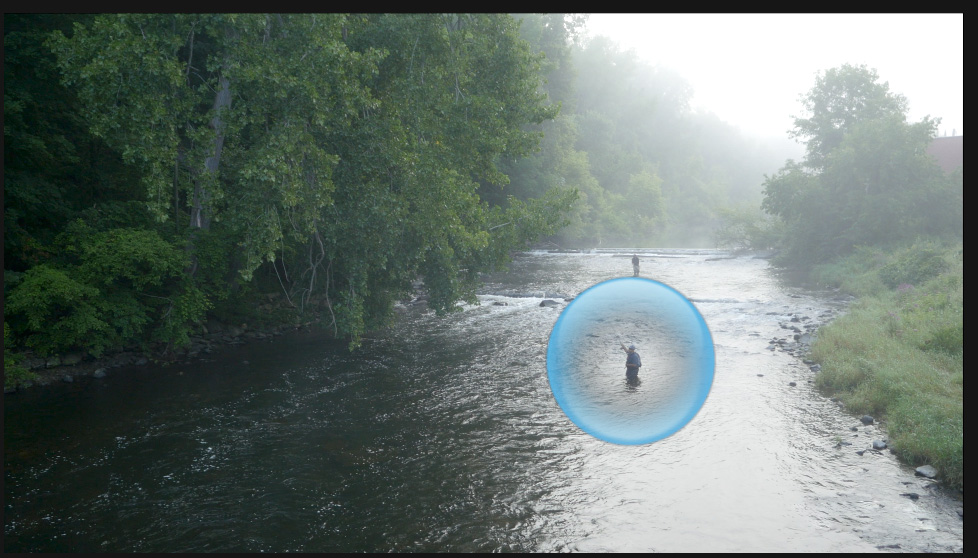 The object tracking system is designed to work by dragging a clip from the Browser into the Viewer, then selecting the reference object in the background clip that you want to track.

However, a common use for this technique is to motion-track a title. And titles need a lot of configuration after you add them to the timeline, such that we need a different system to apply a track. 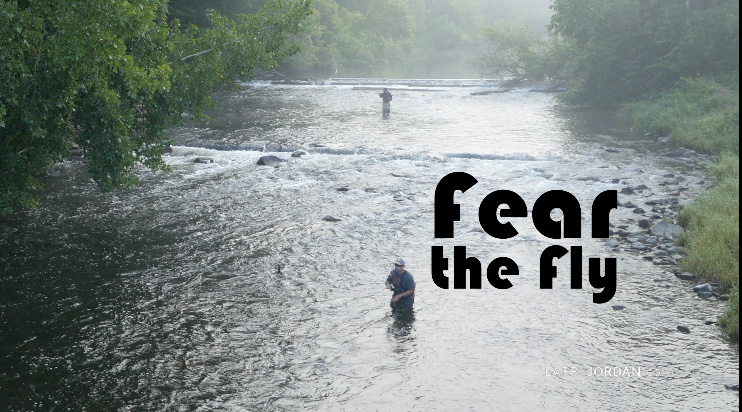 Here’s an example: the opening title to our new horror film: “Fear the Fly.” It’s a title scary enough to make a salmon flounder or make an halibut skate. I added the text clip to the Timeline, then formatted it the way I wanted it to look.

Select the text clip in the Timeline. If the Tracker controls are not visible, click the Transform icon in the lower-left corner of the viewer. 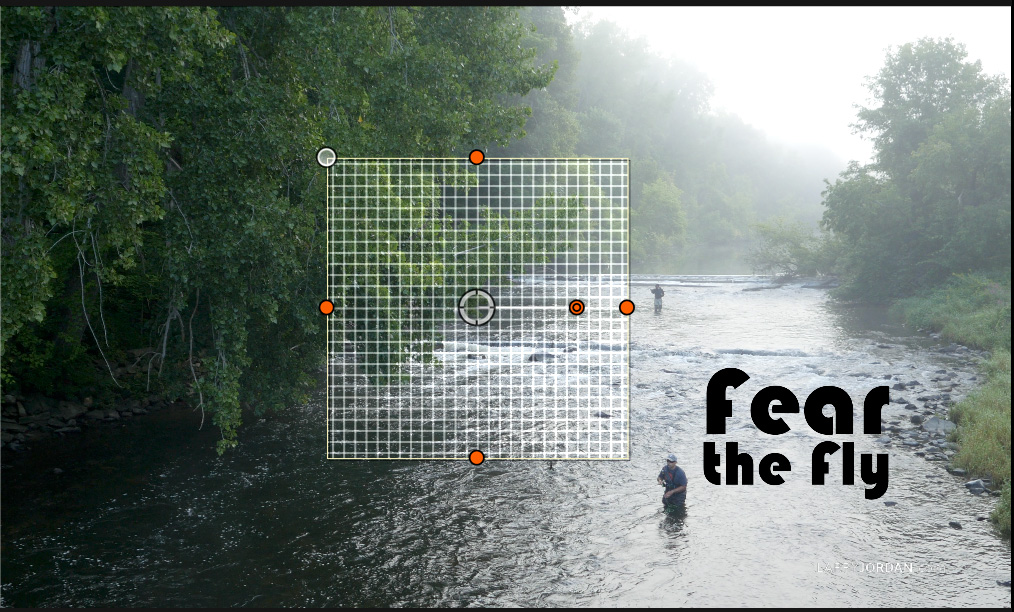 Make sure the playhead is at the start of a clip, then, at the top of the Viewer, click the Tracker button. This creates a new track in the background clip. Drag the tracking rectangle that appears in the Viewer and size it to match the element you want to track. 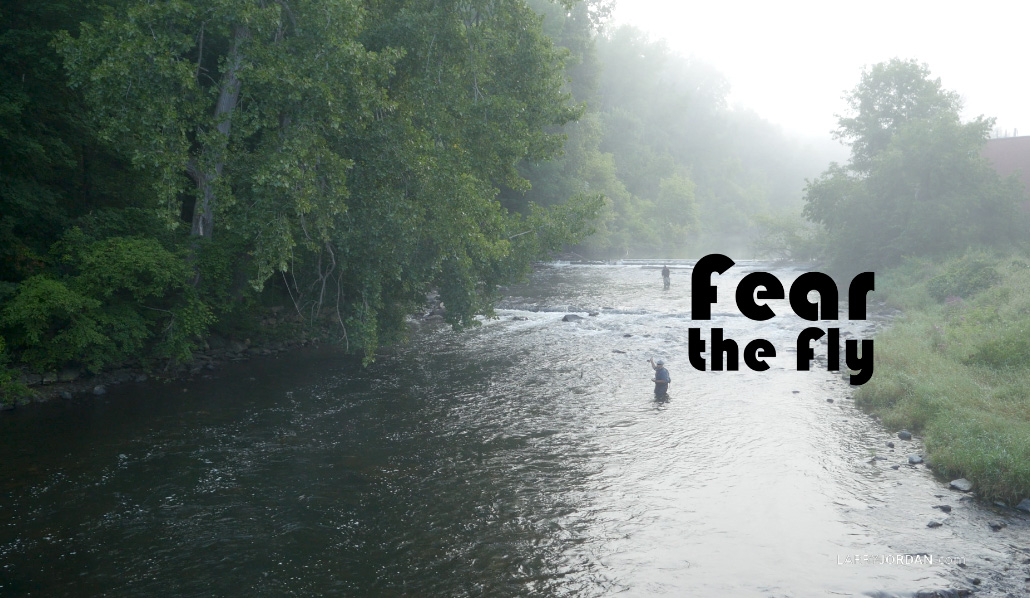 After a few seconds of analysis, your newly-tracked project is ready to play.

You can have the same element track multiple objects. In my example, I can have the fisherman in the background track both the blue bubble and the text at the same time.

You can also track multiple elements in the same clip. For example, I could track both fishermen in this clip. You simply need to create a new track for each element.

If you wanted to track a title across multiple background clips, you would need to create a separate track for each clip, as a track ends when the clip ends.

Most of the time, Automatic is a good setting for tracking. But, if the object you are tracking (the background) changes position, scale or size, try switching the Analysis Method in the Video Inspector Machine Learning.

Tracking will be much faster and you may like the results better.

Click the downward-pointing arrow to the right of Object Track to Reset, Delete or Duplicate a track.

The Apple Help files have more notes on how this feature works.

One Response to The New Object Tracker in Apple Final Cut Pro 10.6.1 [u]