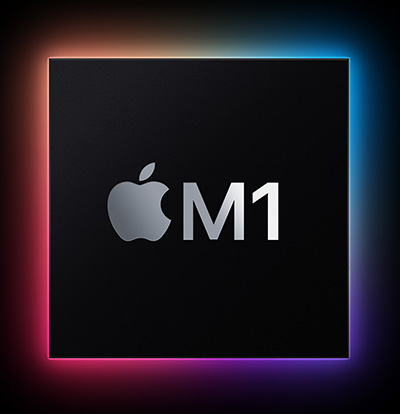 Most of us have heard of Apple’s transition from Intel CPUs to its own Apple silicon. But these new systems upend the established rules for how to configure a computer system for media editing.

Because I frequently give guidance on how to spec a computer, I wanted to find out the “new rules” when considering these systems.

So I did some research. Here’s what I learned.

NOTE: Here are my thoughts on how to configure the new 24″ M1 iMac for video editing. 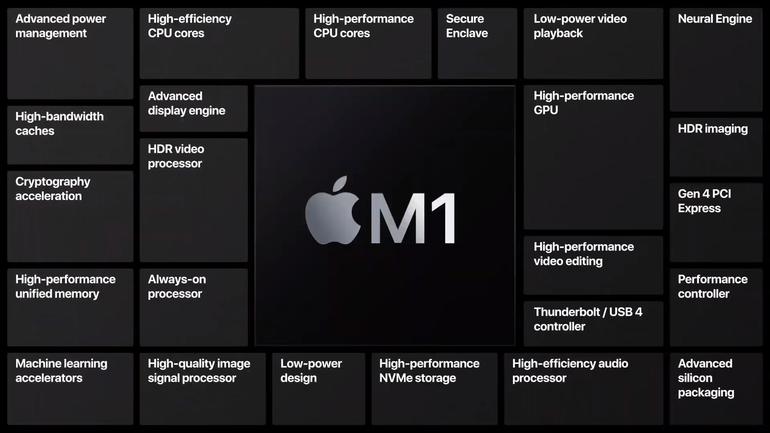 In other words, while the system design will probably remain consistent between chips, the specifications and performance will continue to improve.

Why will performance improve? Because there is absolutely no reason for Apple to make the immensely difficult switch to new computer technology unless there were striking benefits to the new gear. Apple has never been about providing the lowest price. Their focus is on the user experience, system integration and performance.

The second key thing you need to understand about the M1 is that it is not a CPU. It is an entire computer system on a single chip – called a “System-on-a-Chip” (SoC). CPU, GPU, RAM and all the supporting chips needed to make the computer work are all combined together in one place.

NOTE: Well, OK, that’s an overstatement; a computer consists of many, many different chips. But the heart of the system is this single SoC, designed by Apple and tightly integrated for performance.

It’s this integration that makes planning very different as we think about our next computer system for media editing. 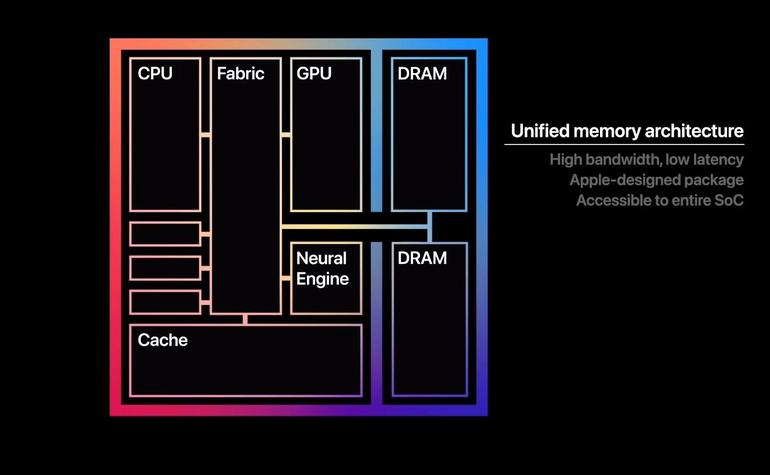 In the past, Apple recommended that, when editing HD (high-definition) media, 16 GB was an appropriate amount of RAM. But as frame sizes exceeded 4K, frame rates increased and we moved to HDR (high-dynamic range) media, Apple recommended expanding the RAM to 32 GB, or more. The M1 maxes out at 16 GB. Can we use it for video?

In the past, when Apple combined CPUs from Intel, GPUs from AMD and RAM from, um, RAM suppliers, each vendor had its own way to store data. This meant that the same file often needed to be duplicated in RAM – one in Intel format, another in AMD format and so on. These duplicated files took up a lot of space.

NOTE: It is worth noting that when a compressed file, like H.264, is loaded into RAM it is also decompressed. Video NLEs can only edit uncompressed media. So, a file that may not take much space on your hard disk can explode in size once it is stored in RAM. However, a video editing program never loads the entire clip – it only loads a few seconds or so as needed – simply to preserve RAM for other tasks.

The M1 uses integrated memory. This is a giant puddle of RAM which every component in the computer can access without first duplicating the file. This speeds performance, while decreasing the amount of RAM needed for each application. It may contain less RAM but it can hold more data.

NOTE: While the new M1 systems are very efficient with RAM, I would still recommend getting a system with at least 16 GB of RAM for editing media.

The key to video editing performance is the speed of our storage, even more than the amount of RAM or the speed of the CPU.

While it is possible to hit the wall with a 16 GB system, especially when running multiple applications at the same time, or editing large-frame size, high-frame rate HDR media, keep in mind, again, that these initial systems are not designed for high-end video editing. Intel-based iMacs and Mac Pros are still better for this than current M1 chips – though, again, that will change as Apple releases more of the M1 chip family in future computers.

NOTE: “Paging” also helps when dealing with smaller amounts of RAM. Paging transfers files that are not immediately needed from RAM to storage (and back). Since the speed of the SSDs in these new computers is very, VERY fast – approaching 3,000 MB/second, compared to the 600 MB/sec of older SSDs – this means that files swap between RAM and storage four times faster. This boosts performance, while maximizing RAM usage. 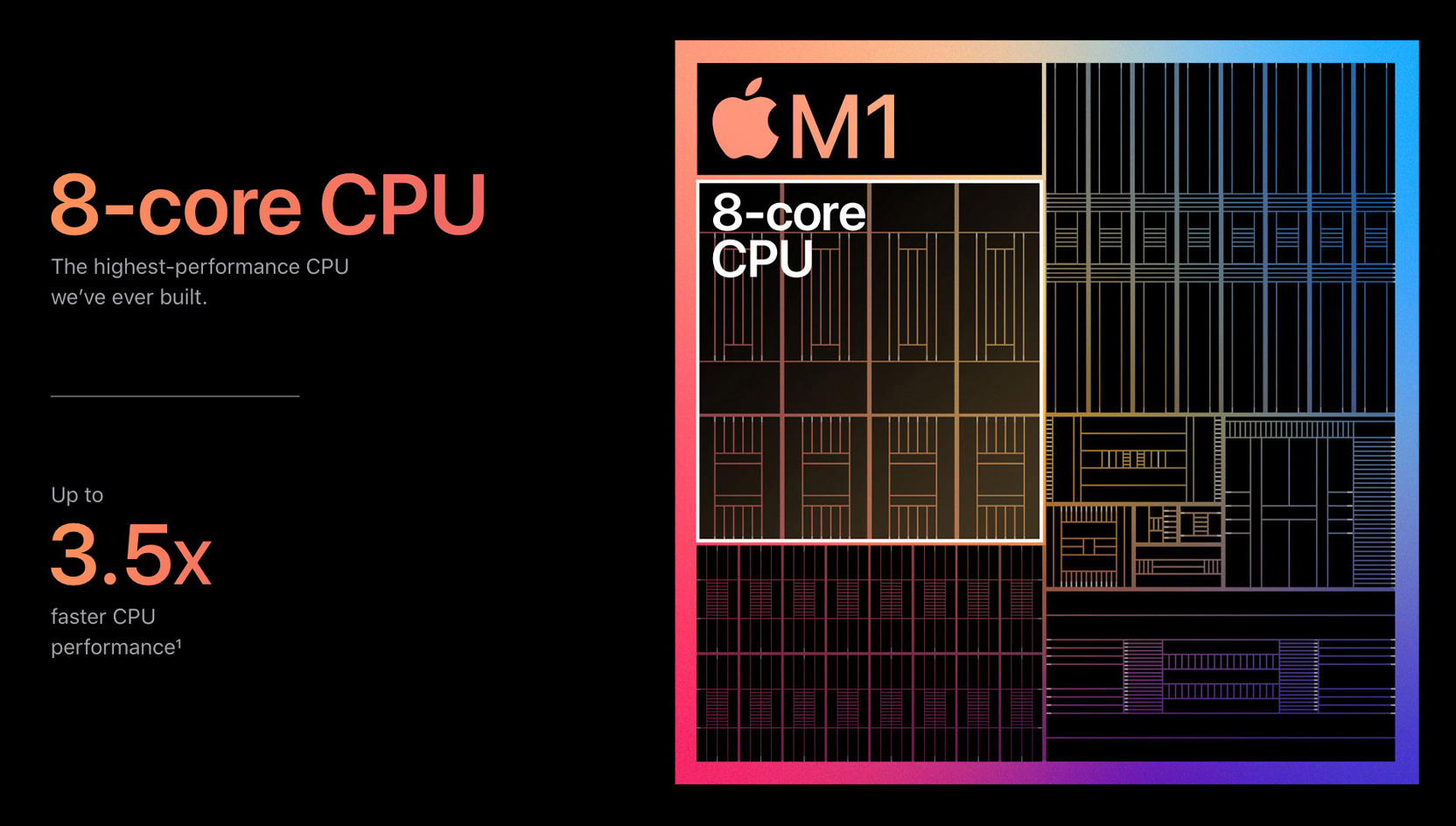 In the past, bar fights broke out between editors over the importance of CPU speeds for video editing. We would argue endlessly about the i3, vs. i5 vs. i7 vs. i9. I’ve written in the past that CPU speed is over-rated, especially when compared to the GPU and storage bandwidth. Apple agrees, which is why they don’t promote the speed of the CPU in the M1.

The M1 simplifies picking the “right” CPU by creating a system with multiple high-performance cores for video editing and high-efficiency cores for less complex tasks like web browsing, email, word processing and the like. The system dials in whichever CPU is needed for the task you are doing.

NOTE: The M1 also includes hardware-accelerated H.264 and HEVC compression and decompression, making these formats much easier to edit.

Storage is a bit trickier. Apple is using custom-built SSDs based upon the NVMe (Non-Volatile Memory Express) specification, which is very, very fast; approaching 3,000 MB/second

However, unlike spinning media, SSDs have a limit on the number of times they can write data to a memory cell before it fails. With all NLEs creating vast amounts of render and cache files, it will be important for us to look for ways to maximize the longevity of our SSDs – especially because, in these first systems, replacing an SSD is not easy. Where possible, buying an SSD slightly larger than you need is probably a good idea.

This is something we need to watch in the future, especially for systems we expect to use intensively for several years.

NOTE: Just as with current systems, external media storage will be necessary. Internal storage, no matter how big, will never be enough for all media projects. For maximum speed, an NVMe SSD connected via Thunderbolt 3 is the best choice. And, as with Intel systems today, RAIDs, either using spinning media or SSDs, are always recommended. 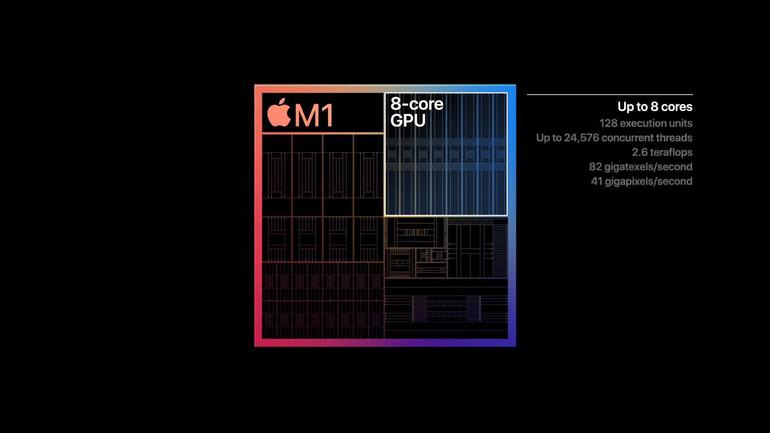 In the past, we had a plethora of GPUs to pick from when configuring a system. While the quality of an image created by a GPU doesn’t vary, the speed with which images are created can vary a lot. GPU speed is an important determiner of performance in color grading, effects and rendering.

Currently, the M1 chip processes graphics faster than any integrated GPU (such as the integrated Intel GPUs on lower-end systems). But it does not yet fully compete with high-end GPUs. This does not mean current M1 systems create images of lesser quality, simply that they do not do so as quickly.

METAL MAKES A DIFFERENCE IN YOUR GRAPHICS

Metal is the technology that provides near-direct access to the graphics processing unit (GPU), enabling developers to maximize the graphics and compute potential of their apps. For maximum performance, look for Universal, Metal-optimized applications to make the most of an M1 system, along with macOS Big Sur. For NLEs, these include: 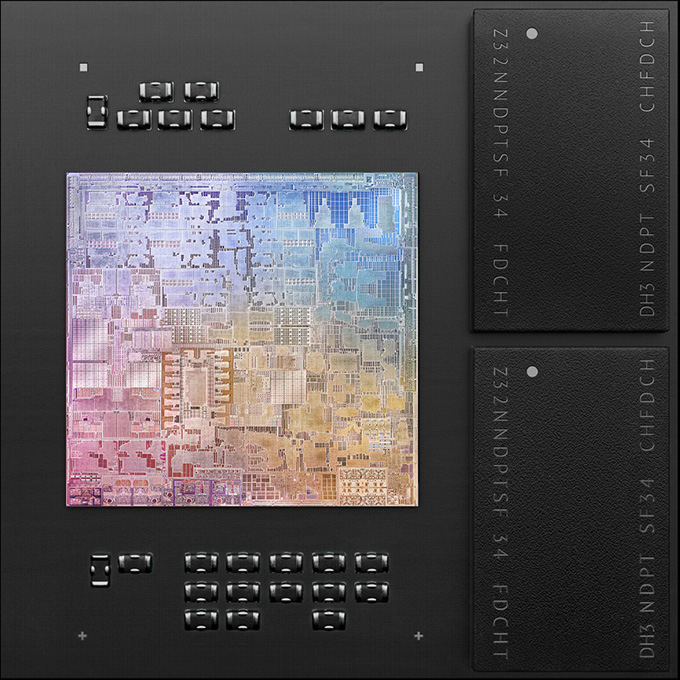 So, what’s the takeaway?

The history of computing has proven that computers always get faster. So, there’s a reason to wait until we see the full range of what Apple has up its sleeve. Still, there are several benefits to purchasing one of the current M1 systems – even for professional editing:

The M1 SoC is the start of something very big. So much so that the rules we knew to be true in the past no longer fully apply. No, the M1 doesn’t violate the laws of physics, but by integrating different elements into a single common infrastructure, Apple is able to achieve better performance in less space that before.

If you need an editing system right now, the Mac mini is an amazing editing powerhouse in itself, with a starting price of only a few hundred dollars. If you need serious performance with a larger screen and additional ports, the current 27″ iMac with an Intel chip is a better choice.

Other systems are on the horizon. Apple has announced that it will convert all its Mac systems to the new Apple silicon over the next 18 months; though no specific timing or gear are yet announced. Still, when those systems ship, they could redefine desktop computing as we know it.

Personally, I’m looking forward to it.