The cool thing about shooting video with a handheld camera is that you can move the shot instantly. The bad thing is that your audience gets motion sick watching shaky footage.

Adobe Premiere Pro comes to the rescue with a powerful effect to stabilize shaky footage.

NOTE: Stabilization works on whole clips, not ranges. If you need to stabilize a section of a clip, cut it first.

All image stabilization works the same way. It starts by analyzing the video to determine:

NOTE: Analysis is generally faster than real-time. However, the time needed is dependent upon the speed of your CPU, the duration of the clip, the amount of movement and the frame size of the video.

However, zooming in tends to blur the image because existing pixels get larger. So, the stabilization software allows you to vary the amount of stabilization from smoother to locked down. The more stabilization, the steadier the shot, but this results in moving the frame more which requires more zooming in.

It’s a balance. Fortunately, it’s a balance that we can adjust to get the results that best suit the shot.

As you can probably guess, the “magic” of stabilization is how the software determines the actual subject of the video. The good news is that Premiere provides a variety of options to make your video as smooth as possible.

Stabilization can only be applied to timeline clips. Select the clip, then apply Effects > Video Effects > Distortion > Warp Stabilizer.

Instantly, Premiere starts analyzing your footage. When it is done, much of the shakiness will be gone. While you don’t need to render your clip, rendering will make it look its best. 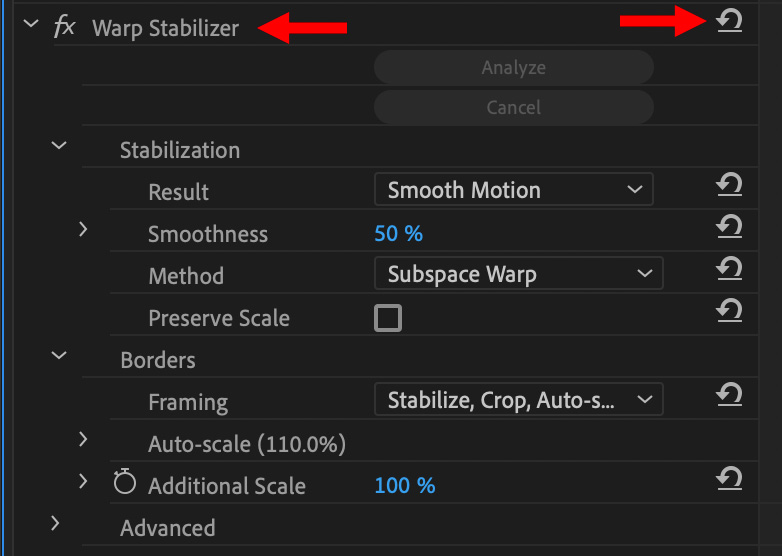 However, the Warp Stabilizer effect (left red arrow) provides a variety of options you can use to improve the results. 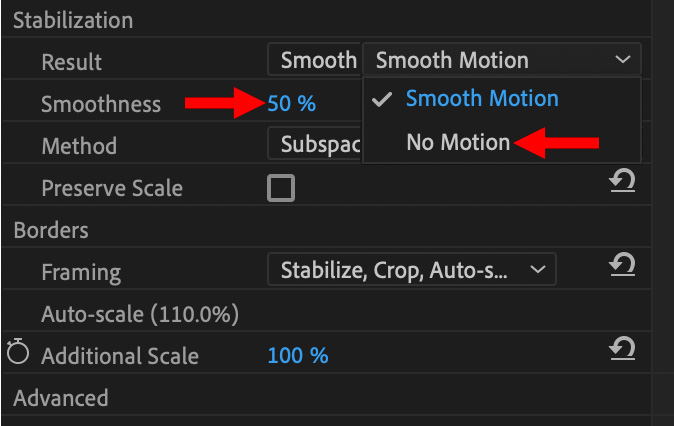 Adjust the Smoothness setting to adjust how much of the shake is removed; lower settings remove less shake. In my earlier example, instead of shifting the frame 20 pixels to remove a 20 pixel shake, it only shifts, say, 10.

To make the image appear as if it were shot on a tripod, chose No Motion from the menu. However, this will zoom in the most to an image, causing the most softness to appear. This amount of softness may be acceptable to you, but the more you zoom the softer the image gets.

While you will generally get the best results from leaving Method to its default of Subspace Warp, changing to Position, Scale, Rotation can sometimes minimize artifacts.

The default Framing is to stabilize, crop and auto-scale the shot. But there are other options:

NOTE: The Advanced settings, which I never touch, are described in the Premiere Help Files.

As we increasingly move to hand-held cameras, shaky shots are a fact of life. The Warp Stabilizer effect is a great way to keep your audience involved in your story without them losing their lunch.