Philippa asks: Larry, I would love an article that covers keyframe options in detail. For example, what’s the difference between Bezier, Auto Bezier, and Continuous Bezier? For that matter, what is Ease In and Ease Out? It would be much appreciated!

We use keyframes whenever we want something to change during playback. Keyframes can be created manually or automatically and keyframes are always set at the position of the playhead in the Timeline.

Two typical examples of keyframe use are changing audio levels or changing the size and/or the position of a video clip on the screen.  While two is the minimum number of keyframes to create a change, there is no upper limit – you could, if you wanted, put a keyframe on every frame in a video clip.

Here’s a link to Adobe’s Help page on adding, modifying and deleting keyframes.

In Premiere, when we add a video keyframe, the options available to us vary depending upon whether the keyframe is for video or audio, as well as the effect being manipulated.

NOTE: To enable keyframes in Effect Controls, click a gray “stop-watch” icon for that parameter. To delete all keyframes for a parameter, click its blue stop-watch icon. 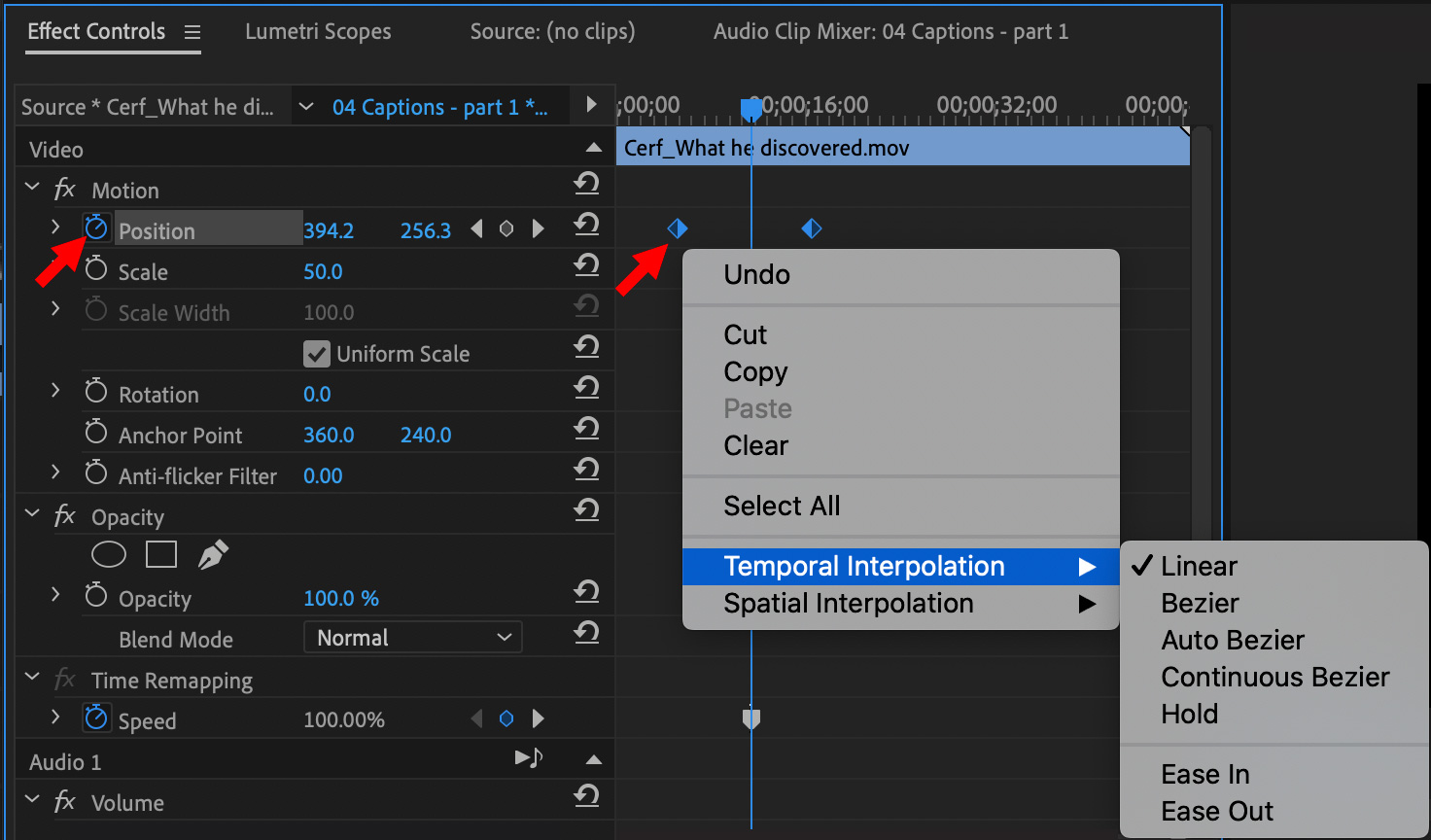 Here, I applied a Position keyframe (left red arrow) to a video clip that I want to move from one part of the screen to another. Control-click a keyframe (right red arrow) for the parameter you want to adjust in Effect Controls and these options appear.

In general, leave this set to Linear. The part of this menu we are most interested in is Ease In / Ease Out, which I’ll talk about in a few paragraphs. 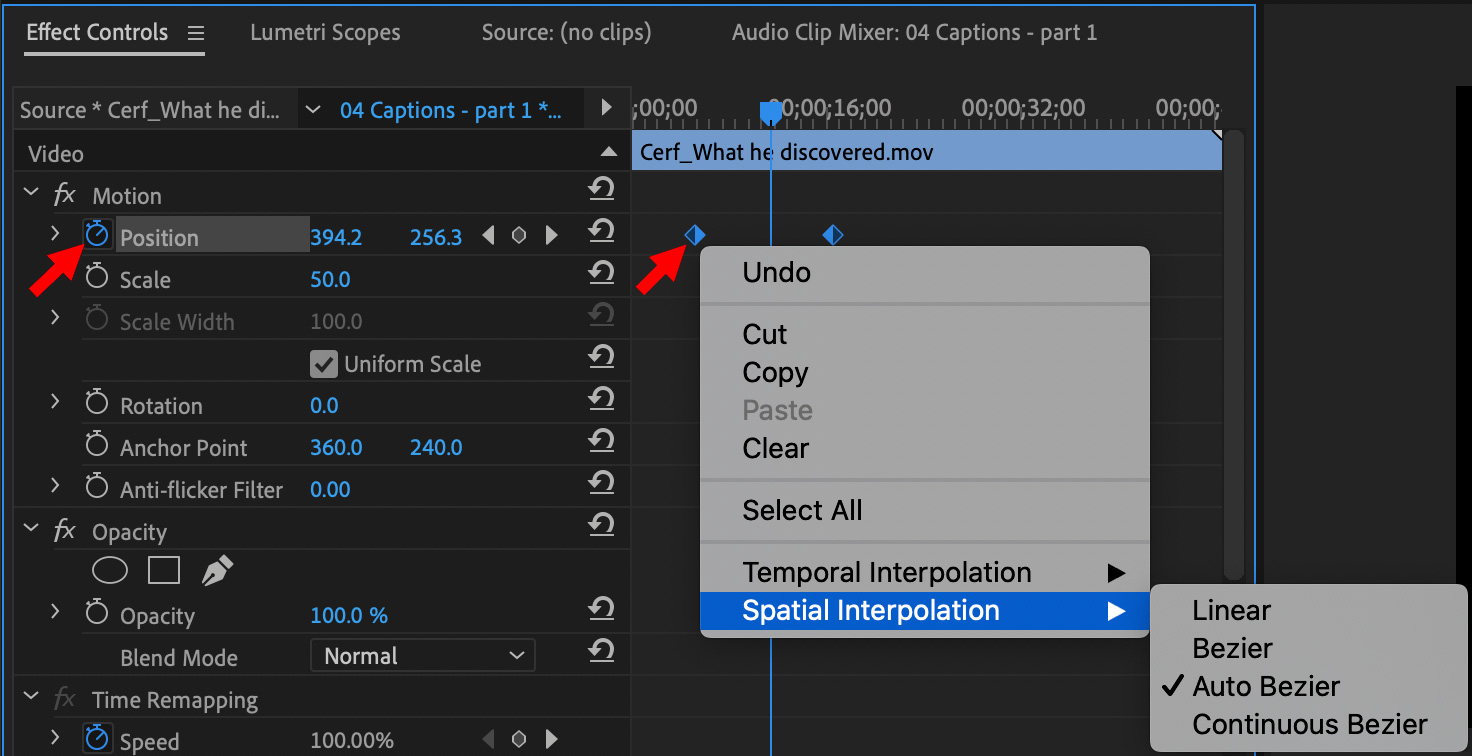 When you want to add custom curves to a motion path, change this to Continuous Bezier. If you need a motion path to turn a sharp corner, set this to Linear. Otherwise, just leave it at the default setting of Auto Bezier.

WHAT THE SETTINGS MEAN 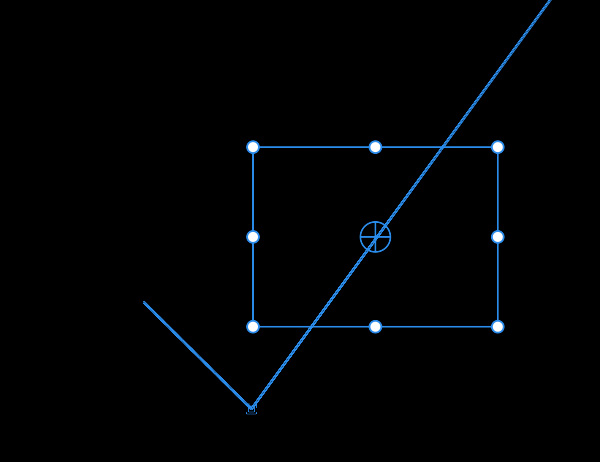 Linear. Creates a movement which does not change in speed from beginning to end. Starts and stops are abrupt. This is the default setting for all temporal effects. When applied to a Spatial Interpolation, it creates sharp corners. 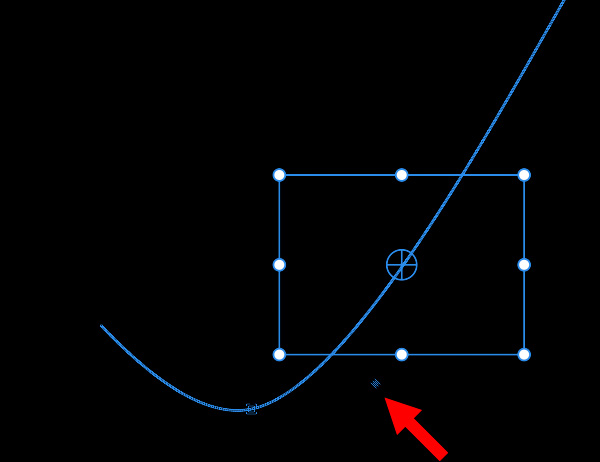 Bezier. Allows the shape or speed of the movement to change during the transition across the keyframe. Linear creates corners, Bezier creates curves.

IMPORTANT NOTE: Assigning one of the Bezier settings does NOT add an Ease In / Ease Out behavior. They are assigned separately.

Within the Bezier setting, we have several options:

Auto-Bezier. This sets the shape of the curve automatically. (The Bezier screen shot, above, shows what an Auto-Bezier curve looks like.) This creates a smooth curve through the transition across the keyframe. This is the default option for Spatial Interpolation and, in most cases, it will look fine. 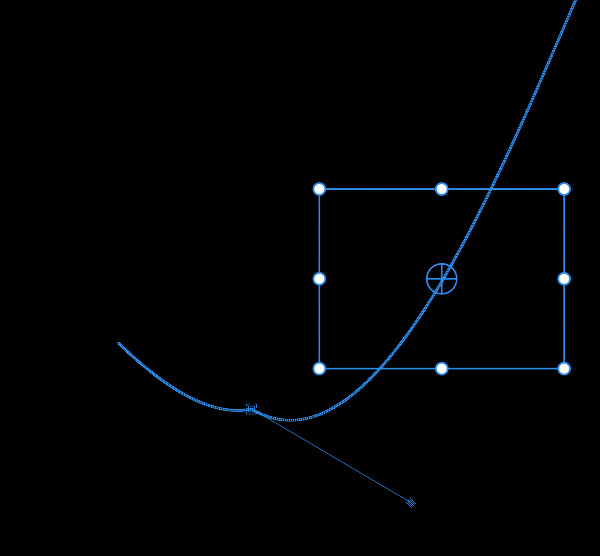 Bezier. This displays one or two small control handles. Drag the dot at the end of the line (red arrow) – it can be hard to grab – to change the shape of one side of the curve. 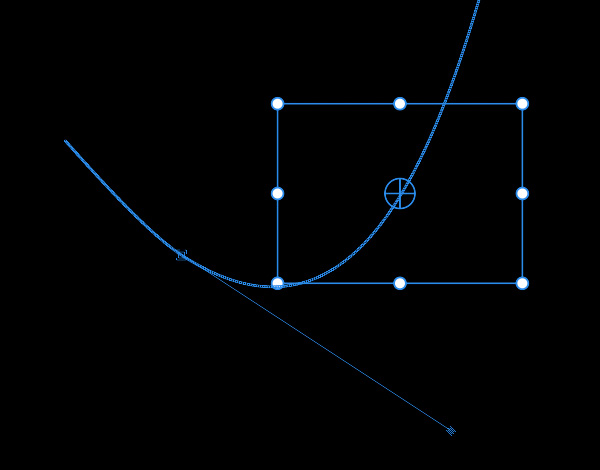 Continuous Bezier. This applies an Auto-Bezier curve to the transition across the keyframe to create smooth curve. However, we can drag the dot at the end of the line to change the shape and placement of the curve. It’s like an adjustable Auto-Bezier.

Hold. This disables the motion path. When the playhead get close to the keyframe, the selected clip jumps to that position. It’s like “tele-porting.” Poof – it’s somewhere else.

Regardless of whether you set the path to Linear or one of the various Bezier options, the keyframes object will move smoothly and evenly from the first keyframe to the last. To change the speed of movement, assuming the settings remain the same, move keyframes closer to go faster, or farther apart to go slower.

When applying a Spatial Interpolation you are deciding between movement with sharp corners or smooth curves. But you are not changing the speed of the keyframed object. Ease In and Ease Out, however, do change the speed.

NOTE: Speed changes to an effect do not change the duration of the effect, simply the speed with which a keyframed object moves between keyframes.

“Ease In” and “Ease Out” are terms that confuse a lot of people. These determine the amount of acceleration or deceleration as an object nears or leaves a keyframe.

As long as you don’t add any Ease In / Out settings on any intervening keyframes, the selected object will start slowly, speed up until it reaches a constant speed for the majority of the keyframed effect, then slow down as it approaches the final keyframe, where it then stops. 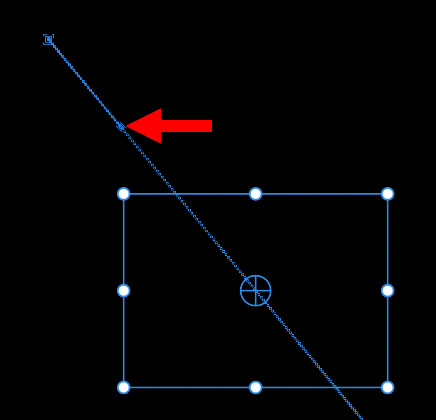 Ease In/Out settings are hard to see. If you look closely at the red arrow (above) you see a little “knot” in the blue line (red arrow). This dot controls the speed of the Ease Out applied to this keyframe (“Out” refers to leaving a keyframe.) Drag the blue dot along the line to change the amount of acceleration. Don’t drag off the line, or you’ll add a curve to the motion path. (An Ease In setting has a similar “knot” just before the keyframe.)

NOTE: You don’t, generally, apply Ease In / Out settings to keyframes in the middle of a movement. You can, if you want to, but most of the time only change the start and finish. 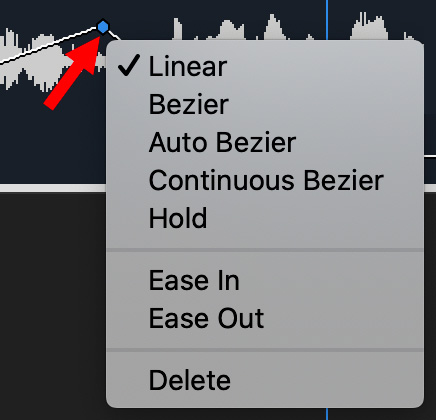 We have the same options when we Control-click an audio keyframe (red arrow). The default setting is Linear and most of the time that’s fine.

However, to add curves to our audio, select Continuous Bezier; this creates an adjustable smooth curve.

Drag a blue dot to change the shape of the curve to whatever sounds the best.

To reset a keyframe, Control-click the keyframe and select Linear.

Keyframes create a change during playback. The options we can apply to a keyframe allow us to shape the speed and direction of an effect.

Most of the time, though, the defaults are fine. But, if you like to tweak, playing with Ease OUT and Ease IN are good places to start. It is easy to see the speed changes they create.

Remember, every keyframe can have different settings.

2 Responses to Premiere Pro: Discover the Hidden Controls in Keyframes