I’ve written about how to move:

So, in this article, I want to show you how to move a Premiere Pro CC project to Final Cut Pro X.

We do this in three steps:

However, there are some cautions in this process: Not everything transfers perfectly. I’ll talk more about this at the end. 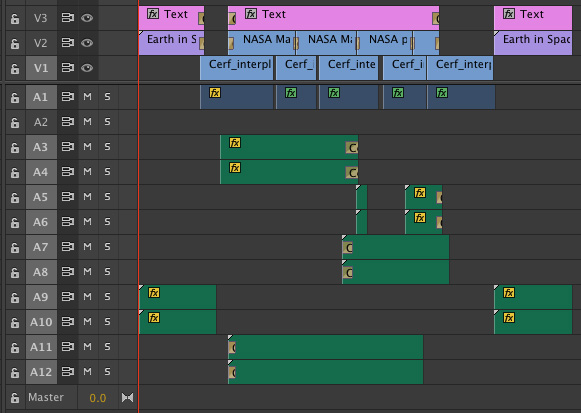 Here’s a typical project inside Premiere. There are several things to note here:

Notice that all stereo audio starts on an odd-numbered track. This is important. Most software assumes that stereo pair audio will be on two separate tracks and further assumes that the left channel starts on an odd track. I have found that I get the most reliable transfers when working with multi-track stereo audio when the left channel is placed on an odd-numbered track. (Premiere does not care if there are gaps between audio clips, nor if an entire audio track is left blank.)

NOTE: This project is based on an older Premiere project, where stereo audio spanned two tracks. In the current version of Premiere, stereo audio can appear as a single clip in a single track. When moving projects between Premiere and FCP X, whether stereo audio is on one or two tracks does not make a difference; as long as when audio spans multiple tracks, the left channel is placed on an odd-track. 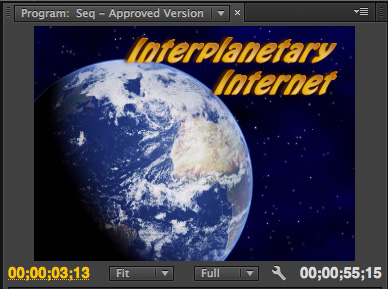 Thinking about text, notice the text color and formatting in this opening title… 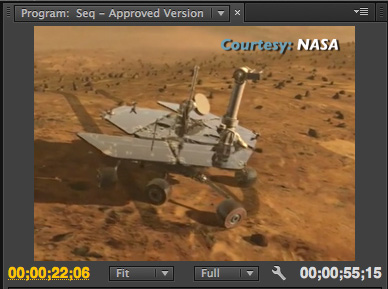 …and the formatting of this locator text. 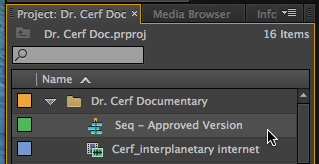 To transfer a project from Premiere, select the project in the Project panel. Then, choose File > Export > Final Cut Pro XML. 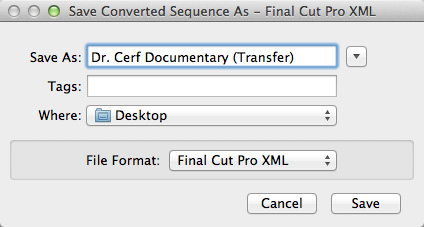 Give the XML file a name and storage location. Here, I’m calling it “Dr. Cerf Documentary (Transfer)” and storing it to the Desktop.

A warning message appears, indicating if Premiere had any problems with the transfer. 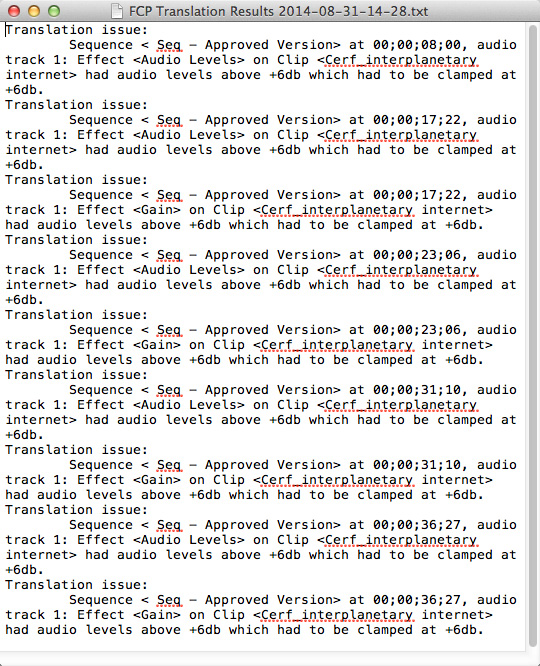 In this case, all problems relate to audio levels. (This is the Translation Results report from this export. Different projects will generate different reports.)

After a few seconds, the XML file appears on the Desktop.

NOTE: XML files are very small – generally, just a few hundred KB. They are only needed to transfer information from one program to another. Once the data has been transferred, the XML file can be deleted. For this reason, I tend to store them to the Desktop to make them easy to find and delete when this process is complete.

FCP X and Premiere use different versions of XML, so we need to convert the XML file so that Final Cut can read it. This requires a utility from Intelligent Assistance called: “7toX” — it’s available in the Mac App Store for $9.99. Here’s the link.

While sending the file to FCP X is the fastest, when it comes to transferring files, I tend to be a “belt-and-suspenders” kind of guy. I prefer to do this in two steps:

So, I chose the “Save XML File” option, gave it a name and storage location and clicked Save. The translation process starts and only takes a few seconds.

NOTE: Creating a new Library is optional, as you’ll see in a minute, but I prefer to transfer projects to their own library. 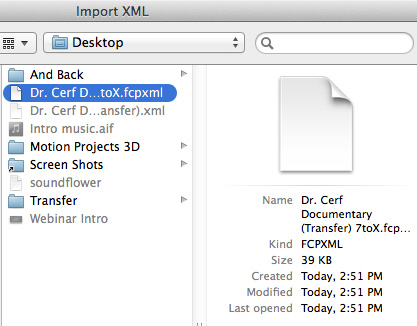 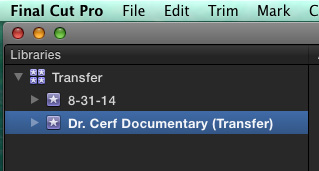 The transferred project is imported as its own event, with the sequence and media inside. (This is why creating a new library is optional.) 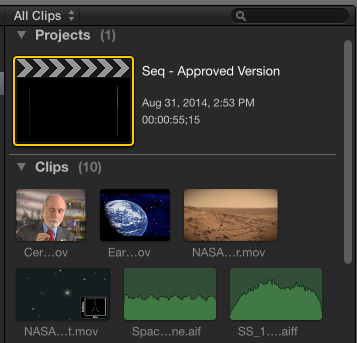 As you would expect, the project and all media are displayed in the Browser.

Here’s what the transferred project looks like, inside FCP X.

NOTE: In discussing this article with the folks at Intelligent Assistance I was told they have encountered issues where Premiere can play media that isn’t recognized by FCP X because it wasn’t ingested and rewrapped as MOV. This just points up that it is important to transfer files ahead of your deadline so you have time to fix problems if they occur.

If I were doing this for real, rather than writing an article about the process, transferring files is very fast. Assuming all software is installed, moving large projects from Premiere to FCP X would generally take a couple of minutes, at the most.

In today’s interconnected world, moving edits from one application to another is fast and easy. The trick is knowing what transfers and what doesn’t. Media and edits are ALWAYS safely transferred. The issues all relate to effects.

As we’ve just seen, because of the differences between Premiere and Final Cut Pro X, not everything transfers successfully. We have similar problems when sending files between different versions of Final Cut, Avid and Premiere.

While all edits and most media transfer successfully between applications, most wipes, effects and color grading do not. This is because each application handles these differently which means that the best time to transfer files is when the edit is complete but effects are not yet started. Here’s a white paper from Intelligent Assistance providing more details on what transfers and what doesn’t.

Also, the following suggestions on media are taken from the 7toX help files: