As we continue to explore visual effects in Apple Final Cut Pro, I was going to showcase the Stylize effects. There are 29 of them.

As I started writing, however, I realized that seven of these effects create illegal video levels for Rec. 709 media if they are used in any project other than video destined for the web. This means that you may create video which fails quality control after your project is complete; which is the worst possible time to discover a problem. 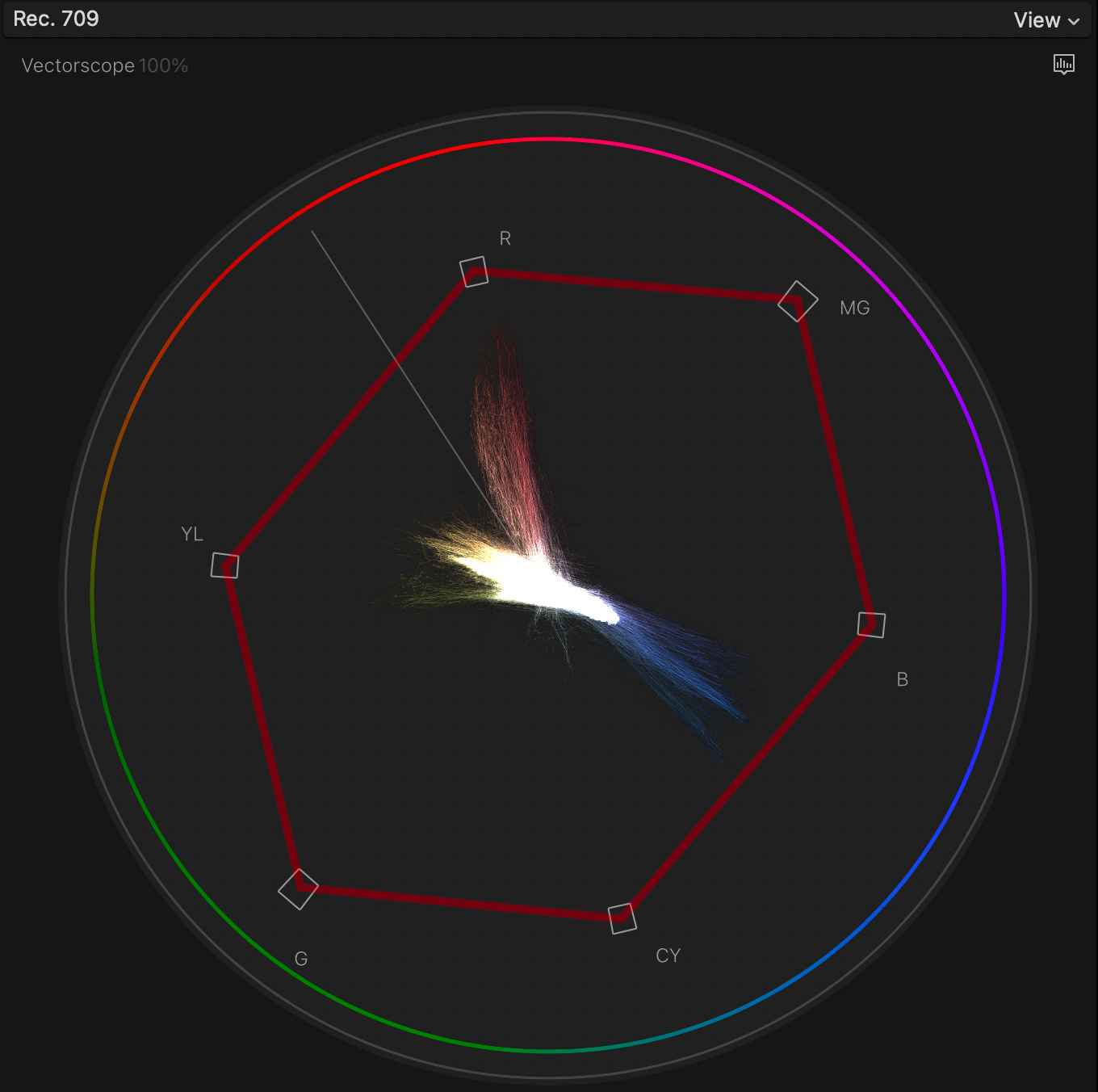 NOTE: This is one of the advantages of boosting colors using Vibrance, rather than Saturation. Saturation boosts all color levels, regardless of grayscale. Vibrance boosts color levels only in the mid-tones, which is much safer.

If saturation exceeds these levels, it must be reduced using one of the color tools, such as the Color Board or Color Wheels. 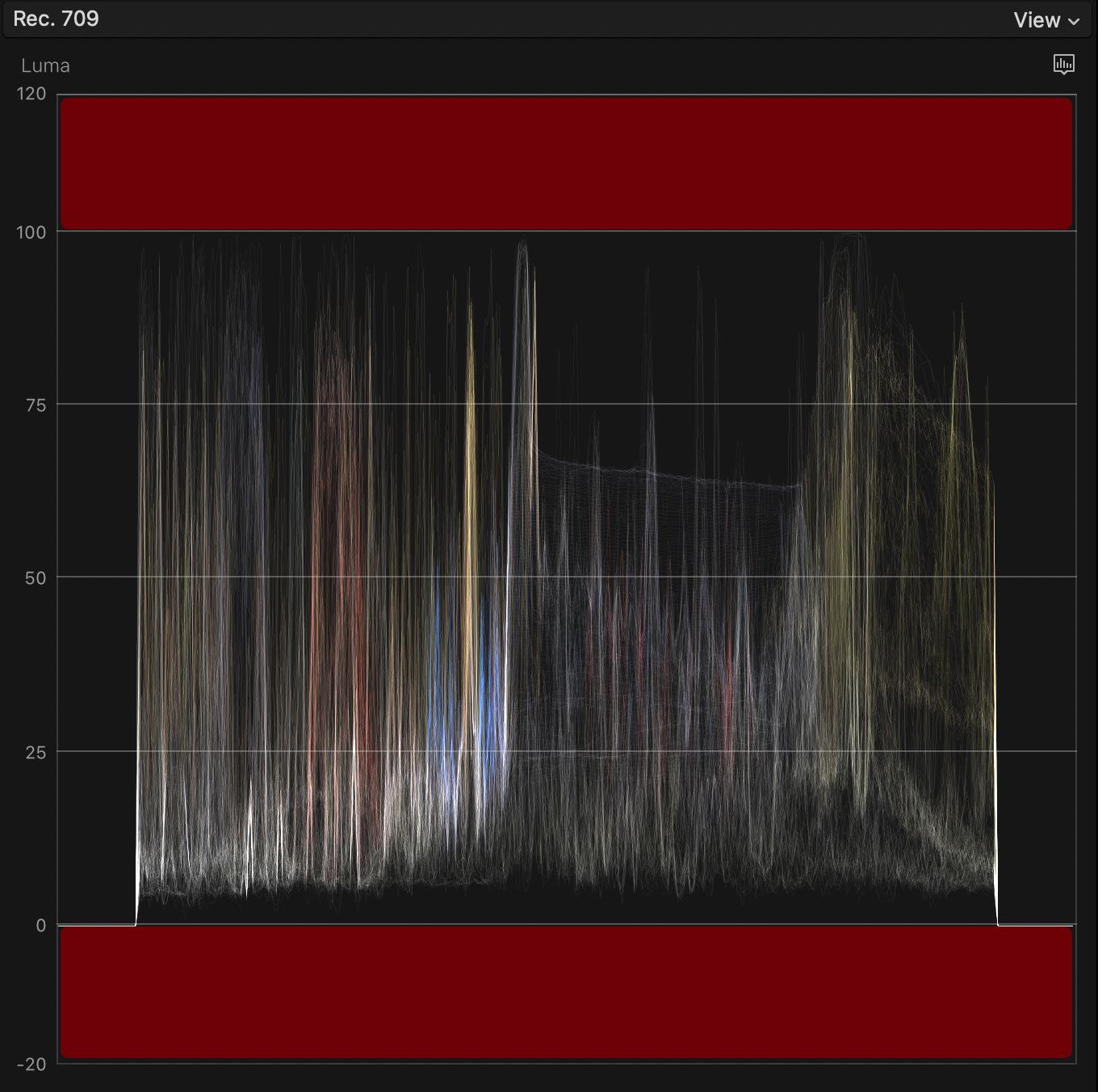 As well, grayscale levels must stay between 0 and 100 IRE (commonly called millivolts in Europe).

NOTE: While video levels for HDR media can and will exceed 100 nits, they can not go below 0. HDR measures levels using nits, SDR uses IRE or millivolts. This tutorial applies to Rec. 709 video, not HDR.

If video levels go below 0 IRE or exceed 100 IRE, indicated by the two red zones, they are illegal levels and must be restrained using the color tools or the Broadcast Safe effect.

These levels are really important and strictly enforced for video NOT posted to social media. 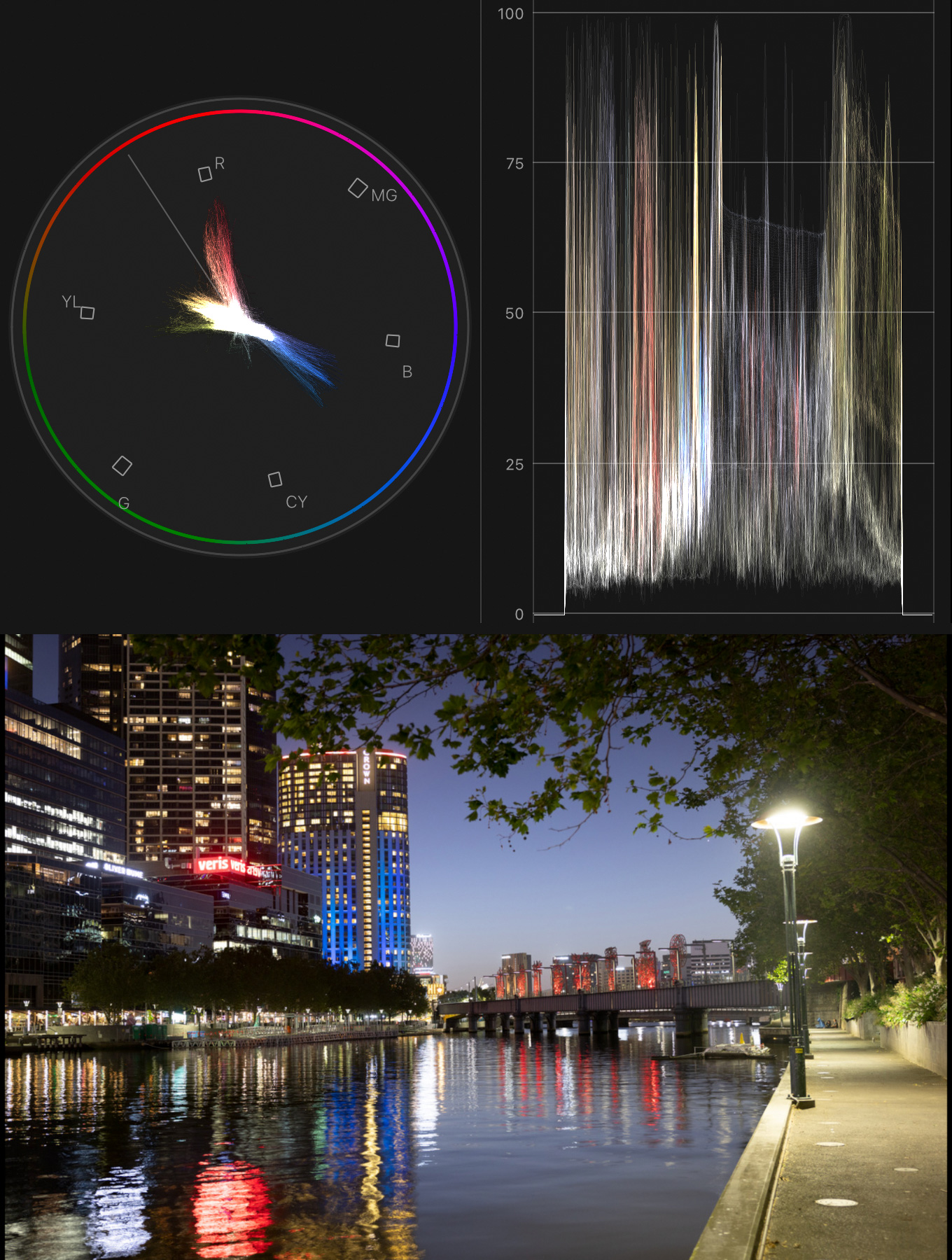 For this example, I’m working with two images. In this first one, note that all levels are within safe zones, including saturation and white levels.

NOTE: Remember, the red zones were drawn by me, they don’t display on the scopes. 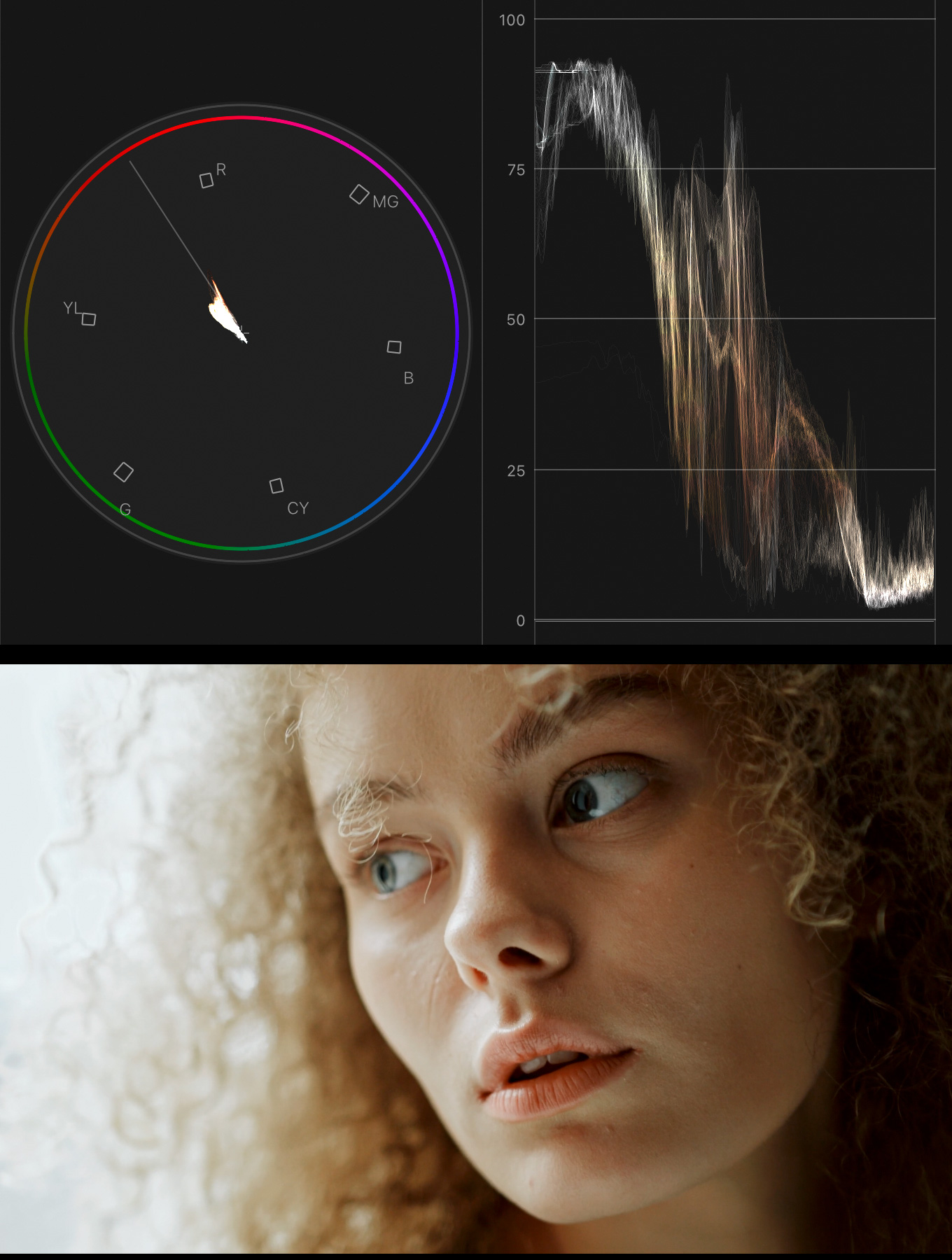 The second image has a wide range of grayscale values from near white on the left to near black on the right. Saturation is not as intense as the first image. 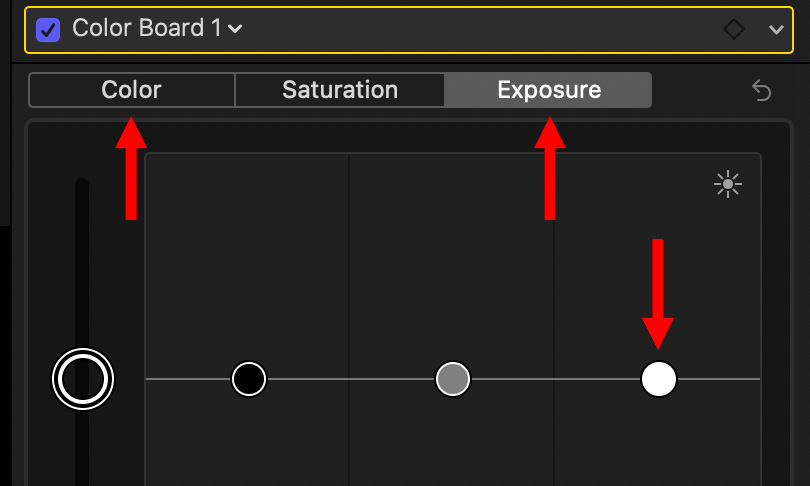 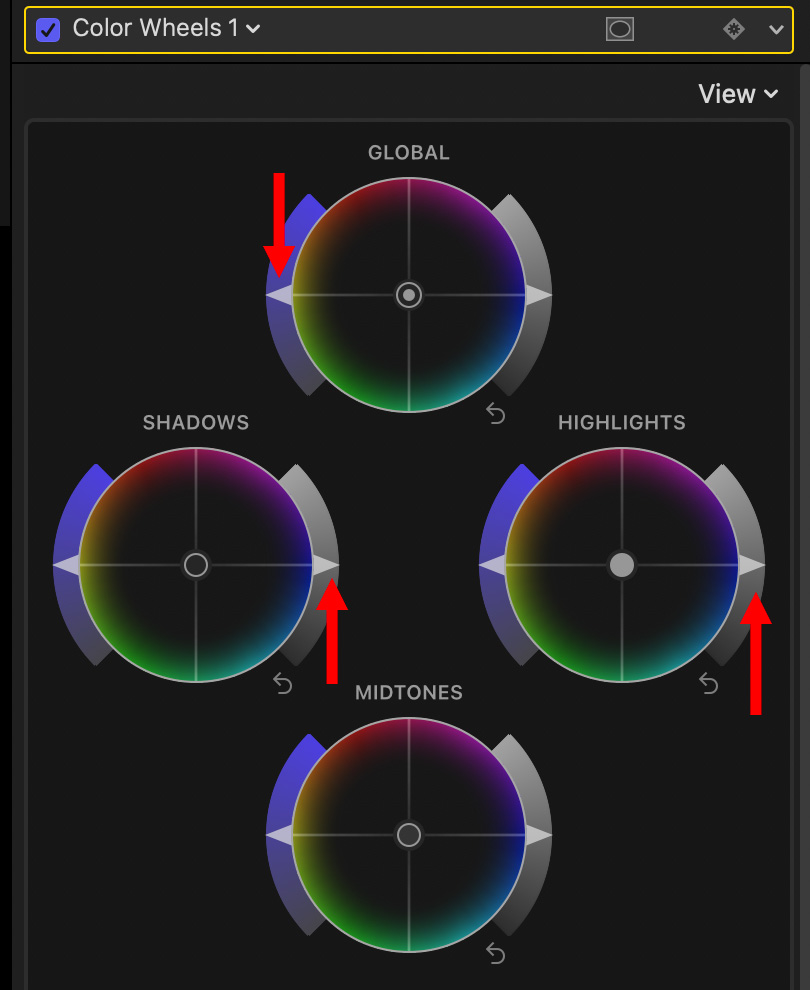 NOTE: When applying Broadcast Safe make sure it is placed (or dragged) below any added effects in the Video Inspector.

With that as background, here are the problem Stylize effects, using their default settings. All these effects are located in Effects browser > Stylize category (shortcut: Cmd + 5). To preview any of these effects for yourself, select a clip in the timeline, then hover your mouse over the effect. 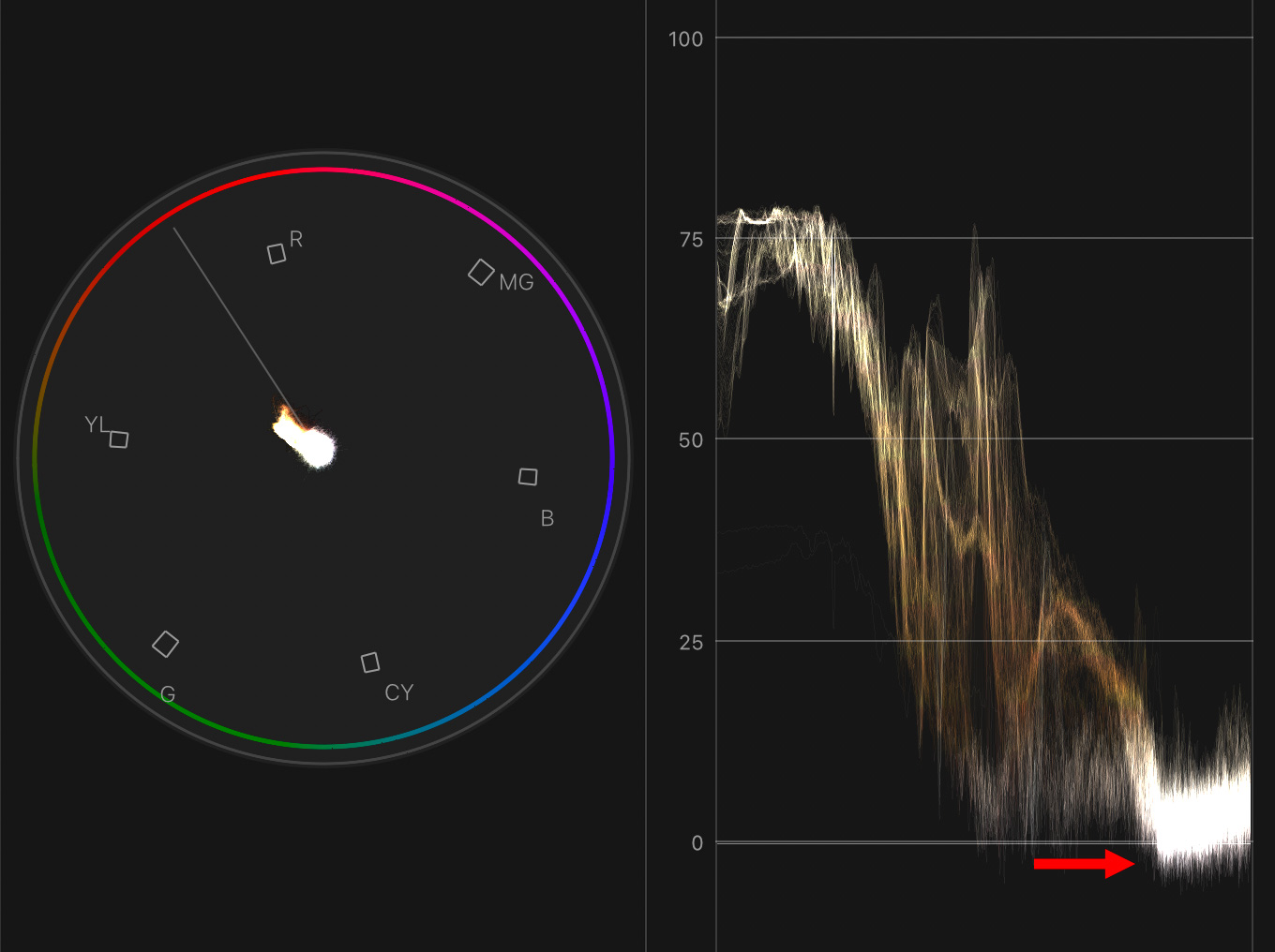 After applying Aged Film, the black levels drop into illegal levels. To correct this, apply either the Color Board or Color Wheels and raise black levels until they are at or above 0 IRE.

NOTE: Changing the Style setting to iMovie grain raises black levels so they are no longer illegal. 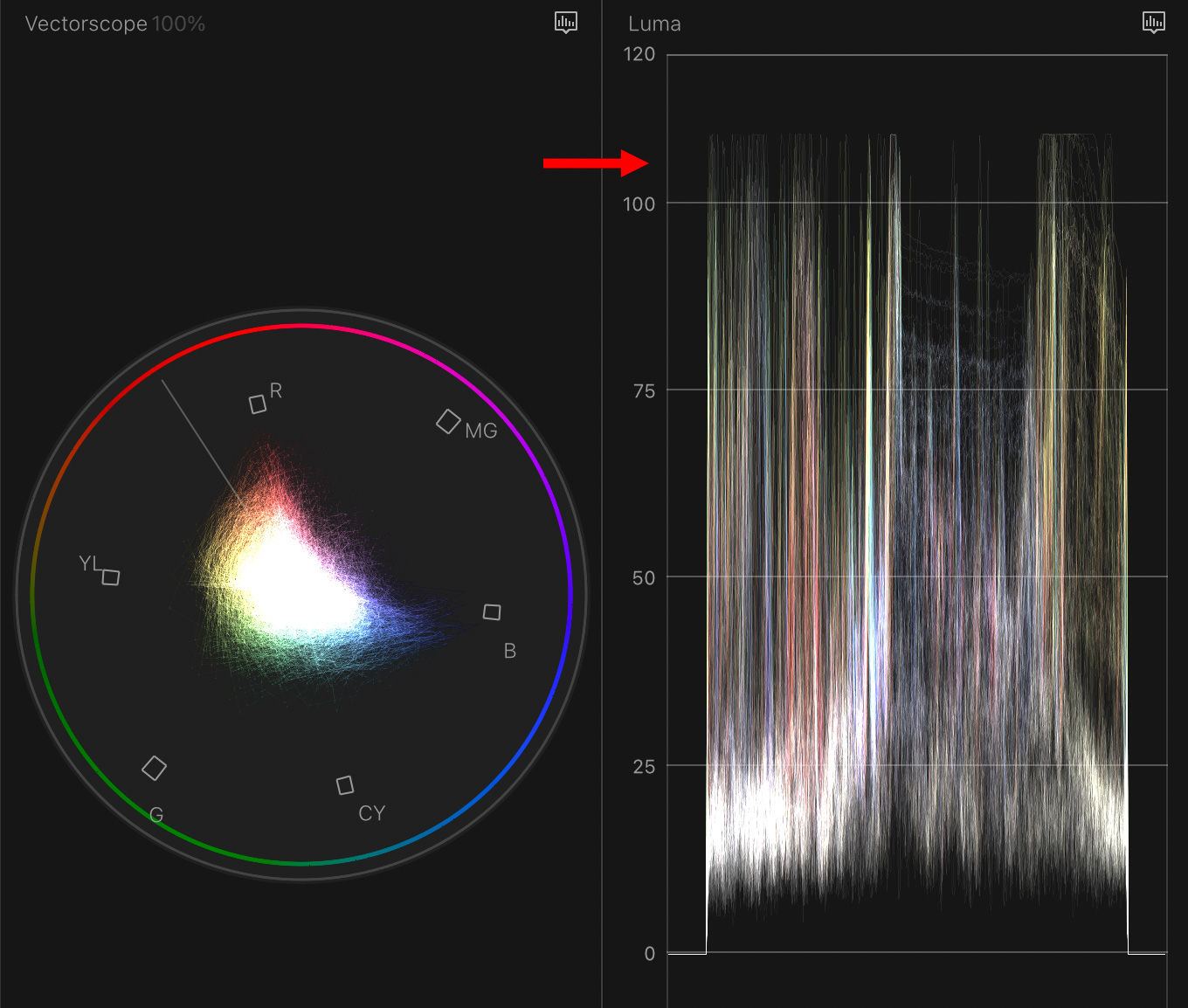 Bad TV did the opposite of Aged Film. It elevated white levels into illegal levels. These can be reduced using the Color Board, Color Wheels or applying the Broadcast Safe effect. 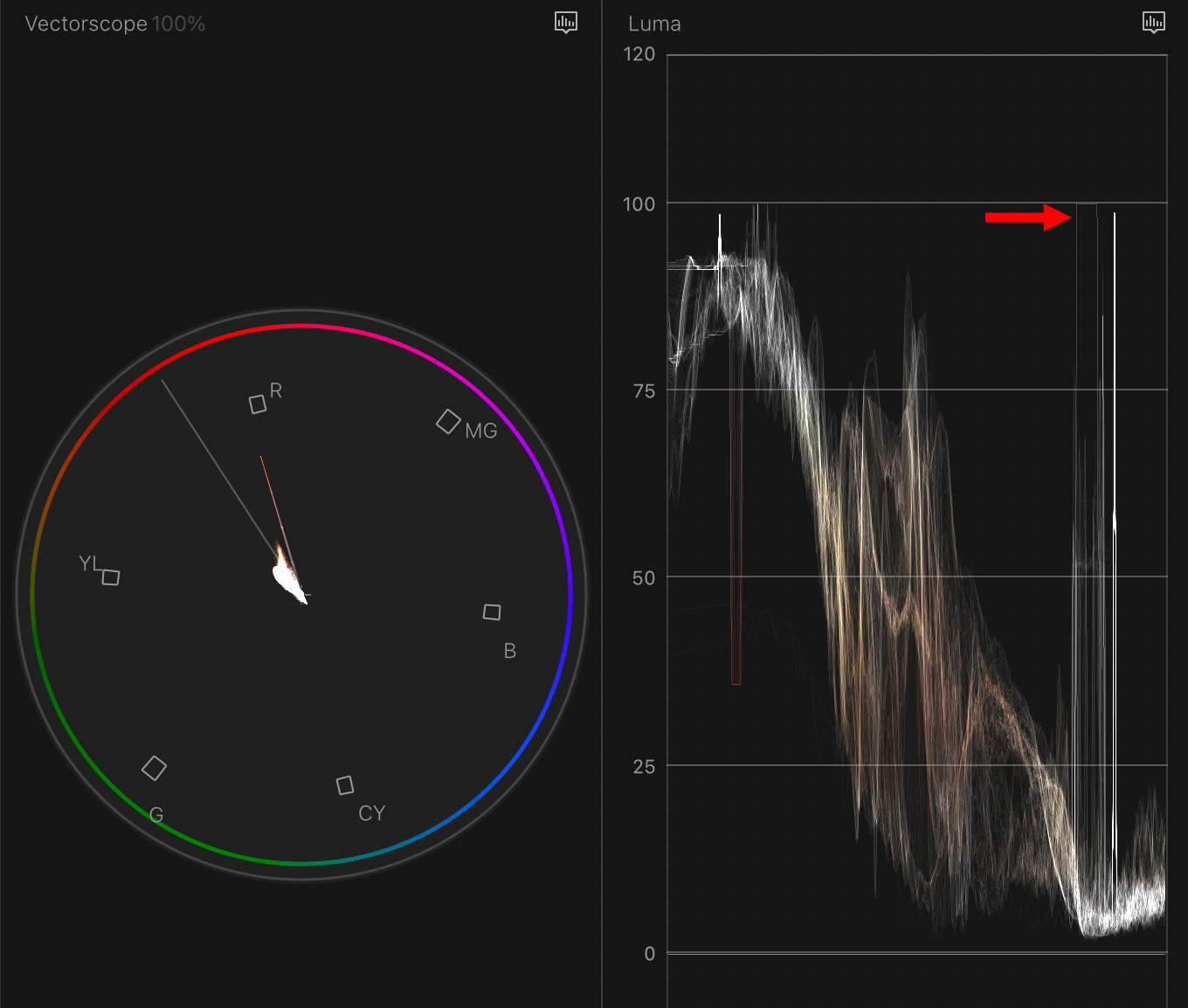 Camcorder superimposes white elements just to 100 IRE. These levels are safe as long as you don’t boost white levels when color grading the clip. 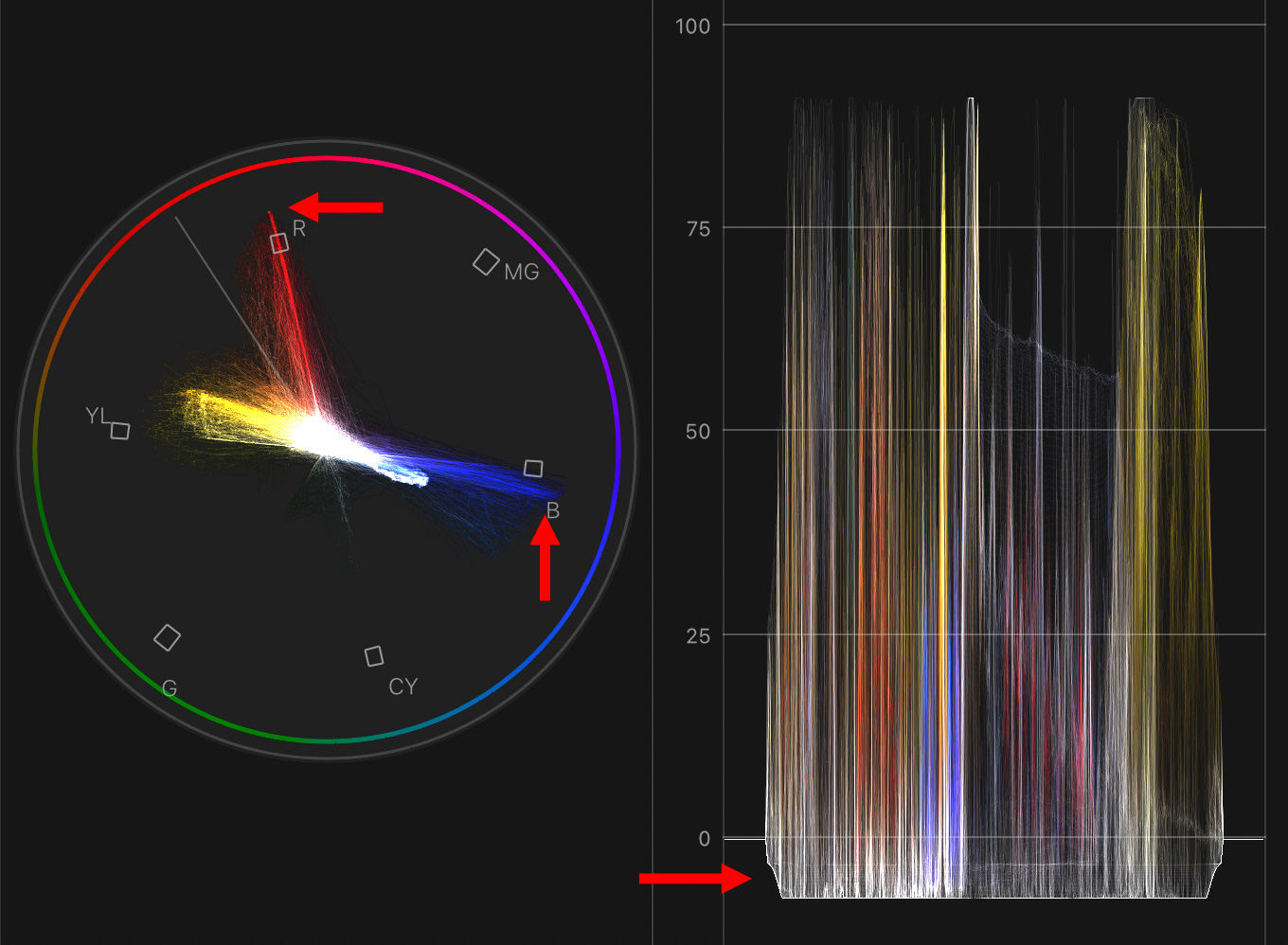 Film Noir is a mess. It supersaturates the image (notice the spikes at red and blue) as well as severely driving black levels into illegal super black. White levels are below 100 IRE, which is OK. 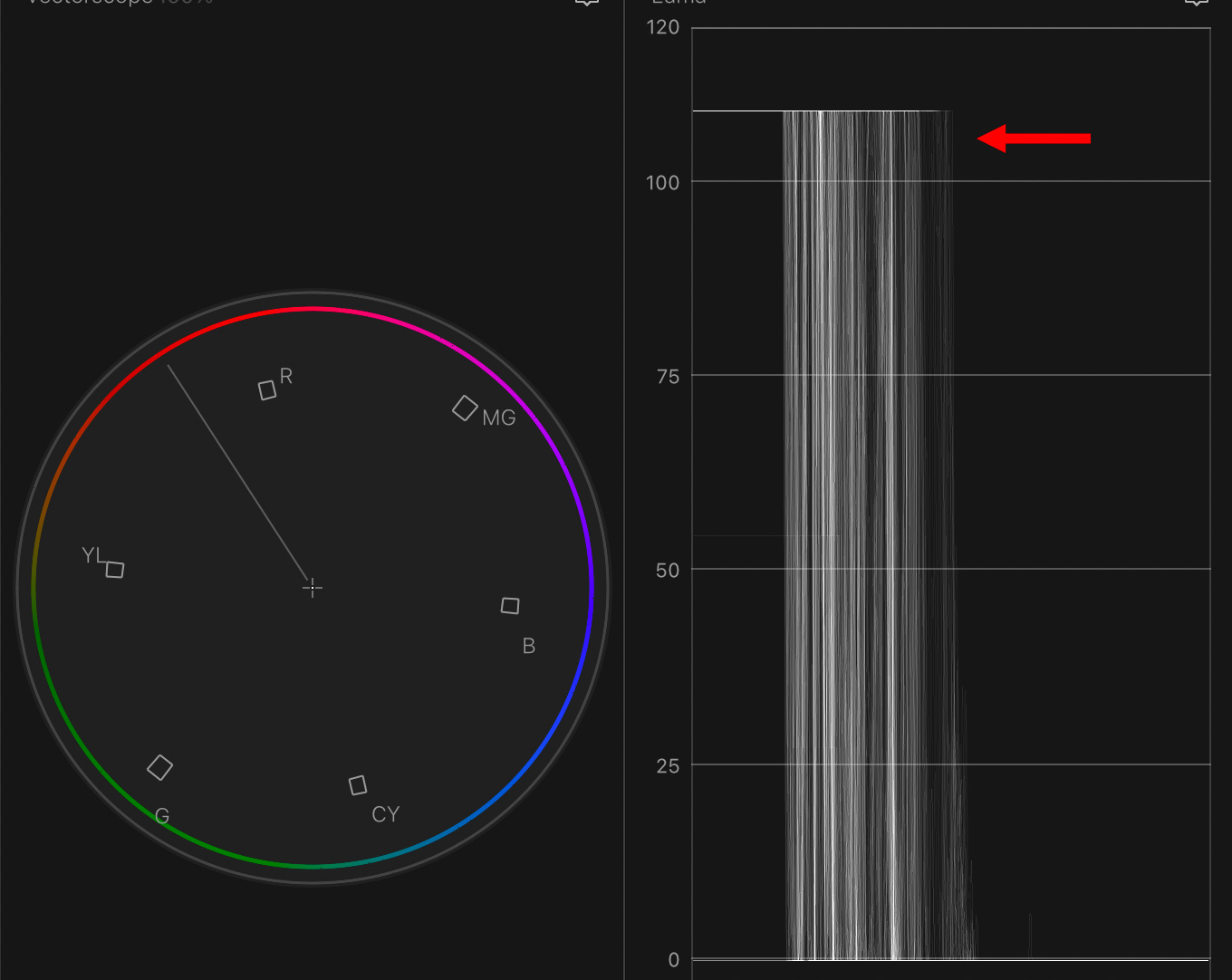 Graphic converts the entire image into either black or white, then drives white levels well into excessive levels. Apply Broadcast Safe to quickly clamp these levels to safe amounts. 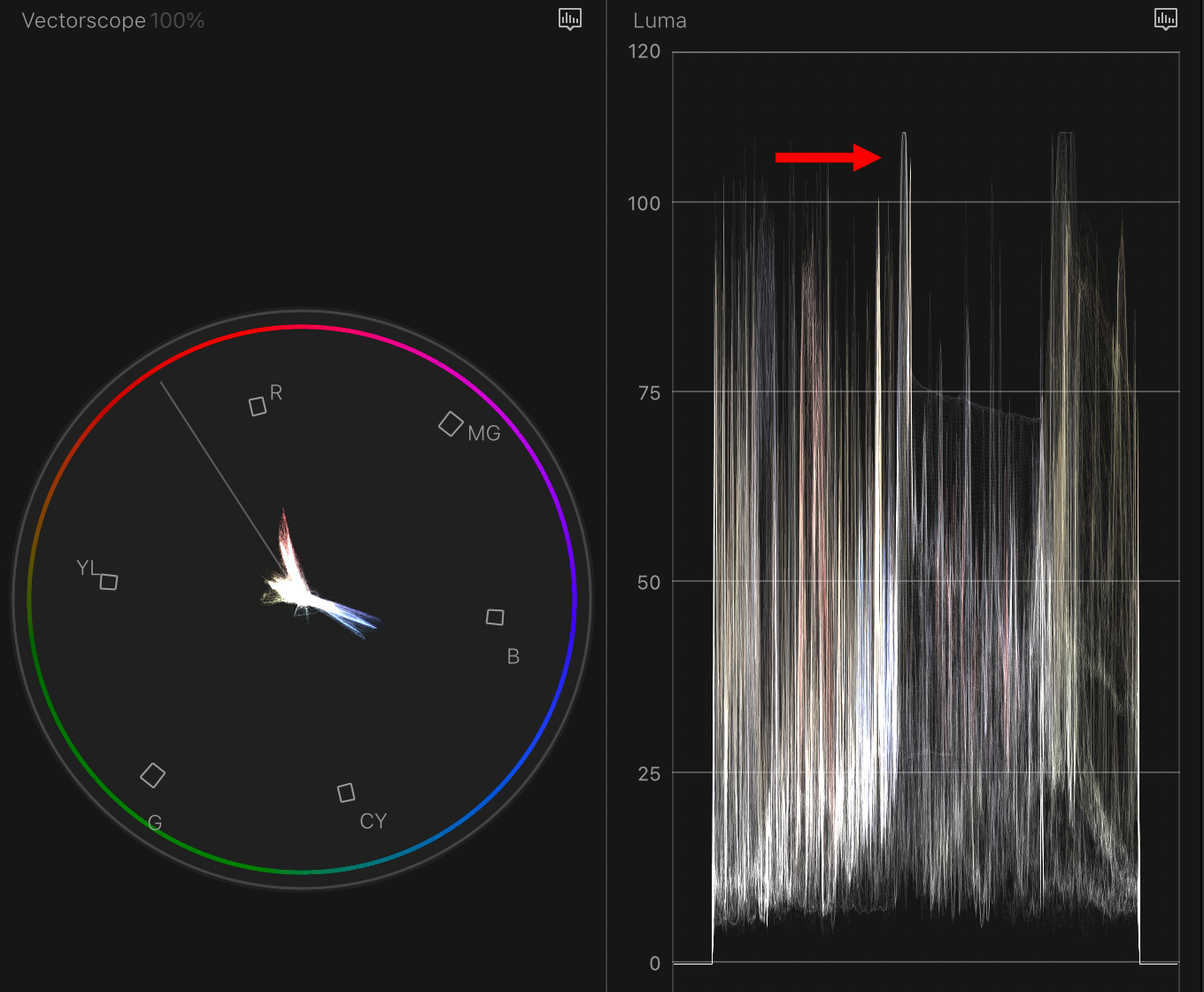 Projector is tricky. It creates bright flashes in the video which exceed legal levels. Make sure to play the entire clip to verify white levels are OK. 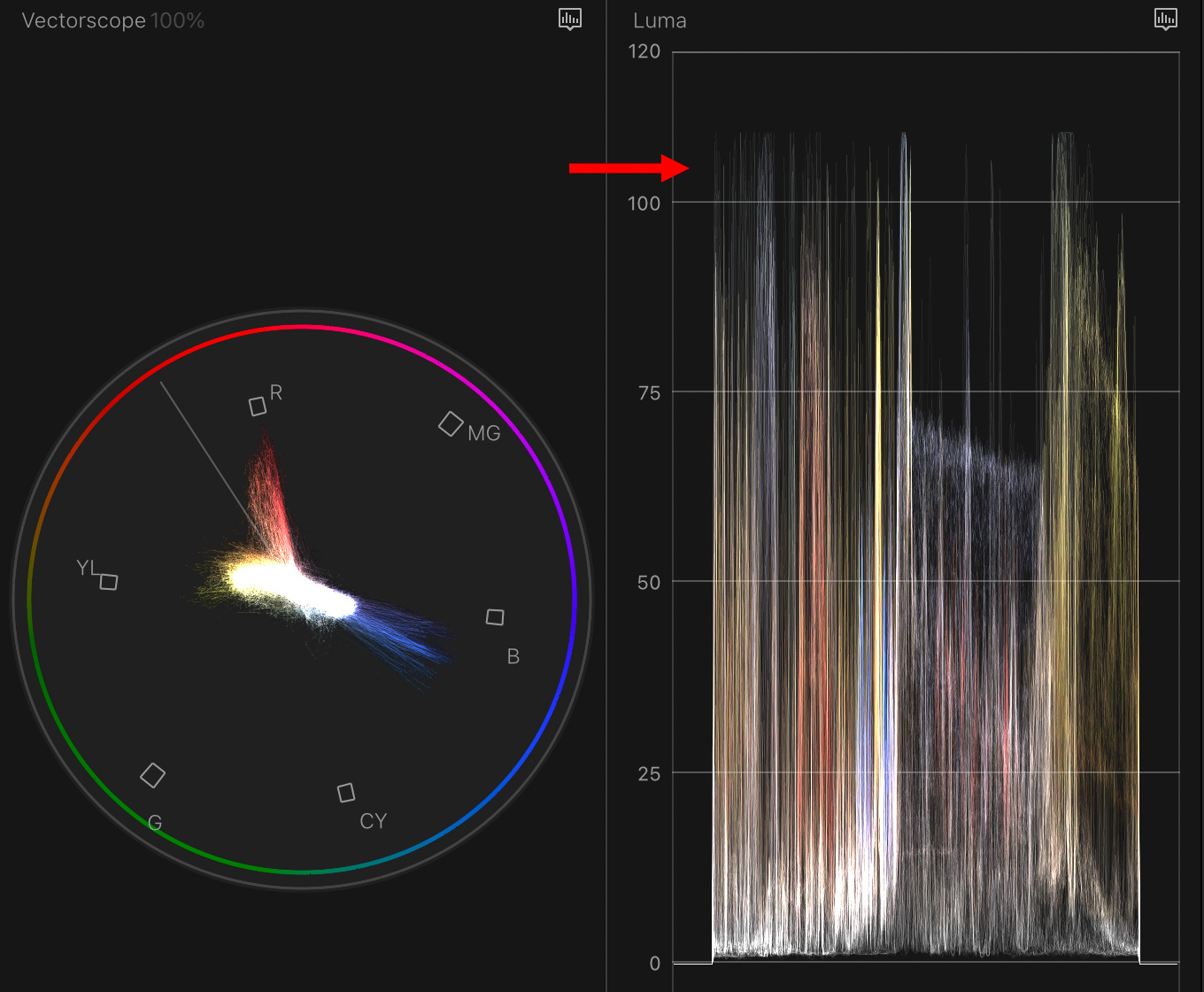 Super 8mm is another effect that severely exceeds safe white levels and pushes saturation dangerously near the limit, depending upon the amount of color in the original image.

An effect that creates illegal video levels is not “bad,” it simply means that you need to adjust video levels before final export. Video levels are not locked until the project is exported.

Still, it would have been nice if Apple provided a way to prevent these excessive levels when they were first designing these effects.