How to Open, Switch Between, or Close Multiple Projects in Final Cut Pro

Apple Final Cut Pro only displays one project at a time in the timeline. However, that doesn’t mean that only one project is open inside that Library.

In fact, FCP loads each project into RAM memory when you first open it into the timeline. (Libraries also load into RAM when they are opened, but not the projects inside that Library.)

To open a project, simply double-click its name in the Browser. No surprise there. It is displayed in the timeline.

But, when you open a second – or third, or fourth – project, the currently displayed project is not closed. It is only hidden. Only the most recently opened project is displayed.

To see all the open, but hidden, projects in Final Cut, right-click the left-pointing arrow next to the name of the currently active timeline. (See the red arrow above.)

This arrow is one of two Timeline History buttons. These function the same as buttons in your web browser. The one on the left lists all timelines that were opened but not worked on.  The arrow on the right lists all open timelines that you worked on. Mostly. Truthfully, I can never keep which project is on which button straight. I click both of them until I find the project I want.

NOTE: The benefit of having multiple projects open at one time is to speed switching from one project to another. Final Cut is very efficient at memory handling, so you don’t need to constantly close projects, unless you no longer need to access them.

TO SWITCH BETWEEN PROJECTS

Click the left or right Timeline History arrow. Generally, the right arrow contains those projects you recently worked with. The left arrow contains projects that you opened or modified a while ago.

Its confusing. Here’s a better option.

Right-click one of these two arrows and choose the project you want. (Each arrow lists different projects, so you may need to check both.)

Or… to cycle through all open projects, type:

As you might expect, all these open projects take memory. 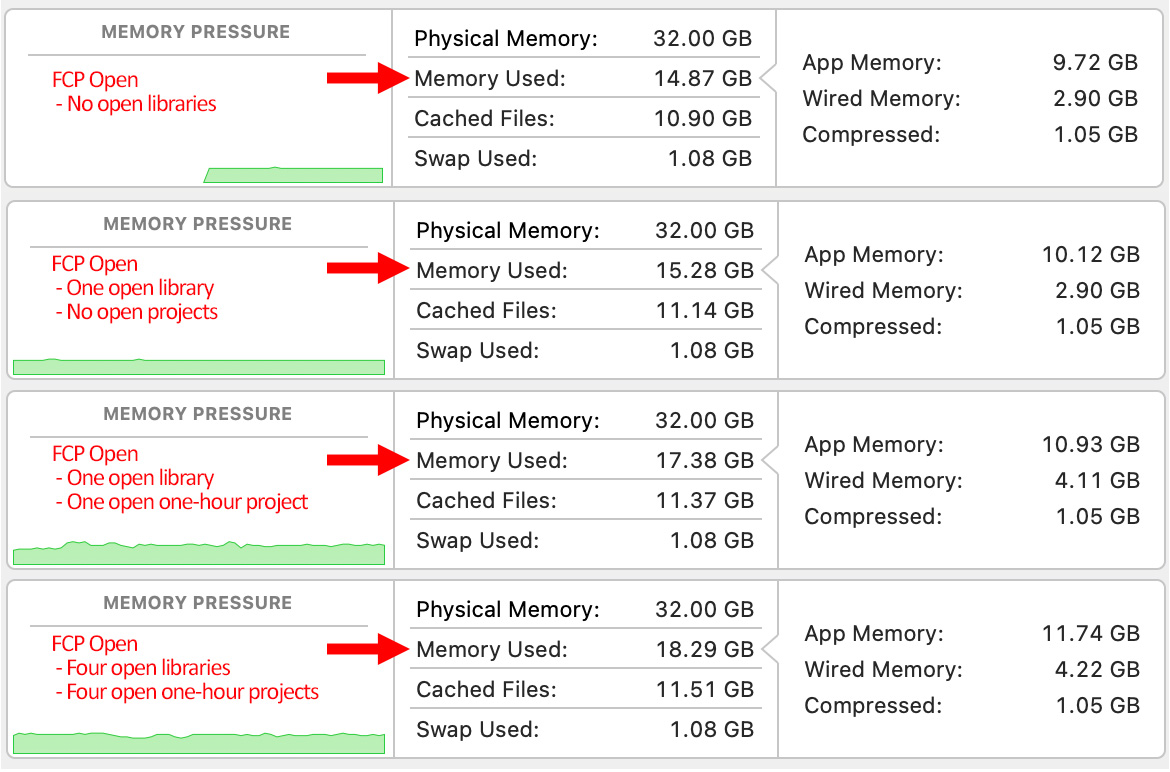 This is not an empirical test, but what struck me was that memory usage doesn’t vary a whole lot regardless of whether one or multiple projects are open at the same time.

NOTE: Memory allocation will vary depending upon how much RAM you have, how many other applications are running, the number of elements in a library and the complexity of the project. (And, probably the phase of the moon and which way the wind is blowing. Memory use varies a lot…)

CLOSE ONE OR MORE PROJECTS

To close a single project, open it in the timeline, then click the downward-pointing chevron  (red arrow) next to the project name and choose to close that project (highlighted in blue).

To close all open projects that are not displayed, click the downward-pointing chevron (red arrow) next to the project name and choose to Close Other Timelines.

NOTE: Closing a project does NOT remove it from the library, nor does it close the library itself. It simply means that FCP in not holding this project active in RAM.

One Response to How to Open, Switch Between, or Close Multiple Projects in Final Cut Pro