Last week, Lesspain Software updated Kyno to version 1.7.1. I’ve been a fan of Kyno for a while and this update makes me even more enthusiastic. Here are the key highlights: 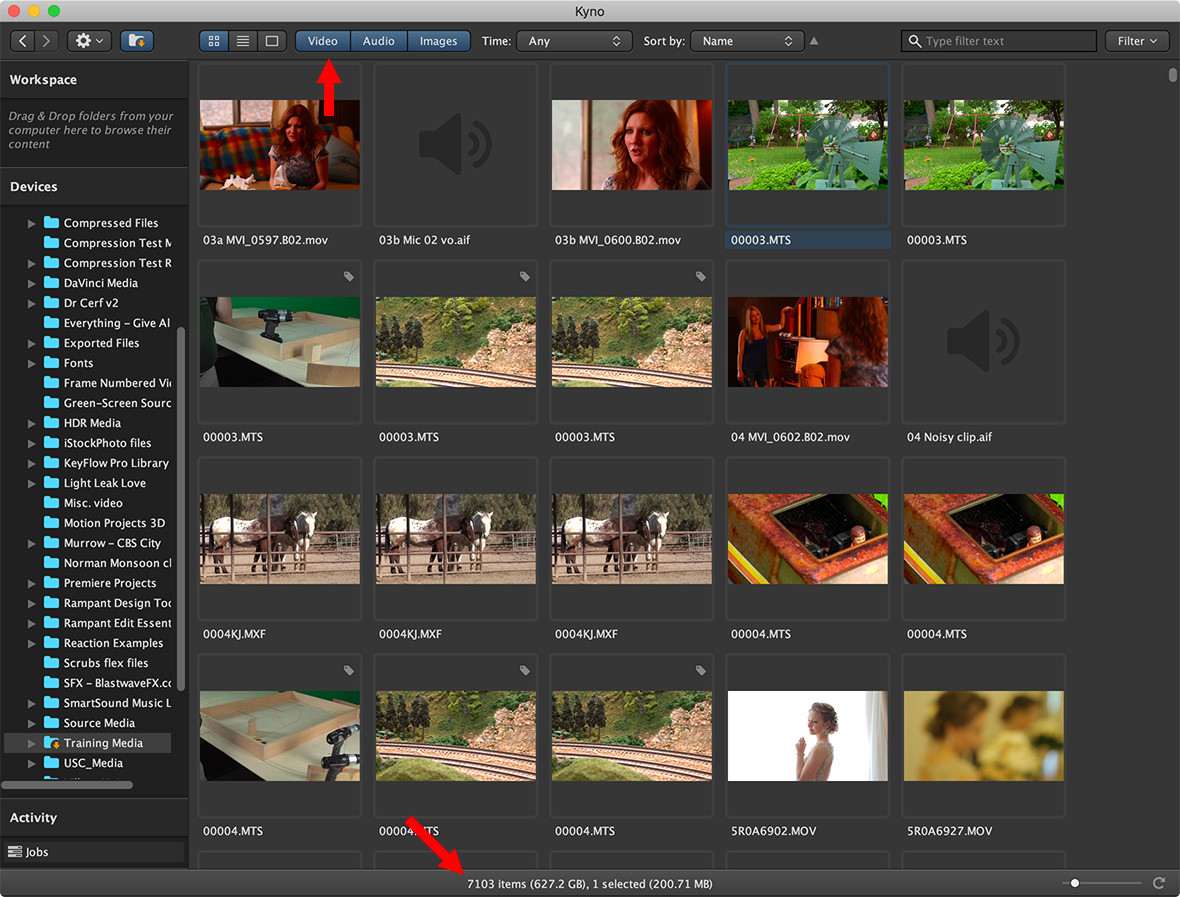 One of the features I REALLY like about Kyno is its ability to display all images contained in a folder AND all the folders that first folder contains. For example, on my iMac, it took about a minute to find and display 7,103 images nested folders deep on one of my servers.

The Kyno interface is the same, the changes are all under the hood. The biggest, of course, is support for Windows. Kyno can now export all flavors of ProRes on macOS and Window 7 or higher.

As well, “We’re proud to announce partnerships and integrations with Frame.io, Archiware P5 Archive and Telestream Vantage that are included in Kyno 1.7, along with a host of improvements in playback of the most important formats and yet more media management and transcoding functionality.” (Kyno press release) 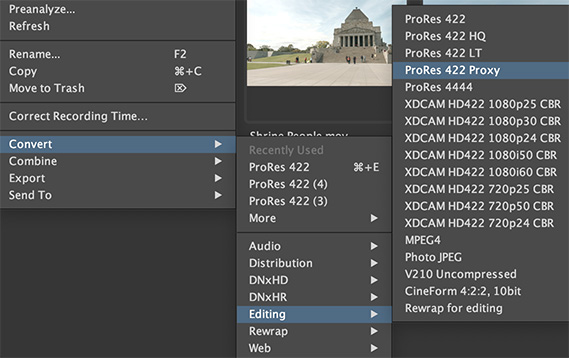 After I published this article, Robert Krüger, CEO of Lesspain Software, sent me the following comment:

“One of the metadata features that we really think deserves a mention is that it is now possible (and very easy) to export a set of proxies or dailies (especially with the new transcoding option that keeps the original folder structure), hand your production assistant a drive with those low-res files and have them log the footage and later “reconnect” that metadata with the original (master) files via a simple export and import, even if file extensions do not match.”

The benefit of this option is that now, you don’t need to lug around lots of extra storage to log footage or work on a rough cut. Yes, both Premiere and Final Cut support creating workflows in the app. Because creating proxy files in Kyno preserves the original folder structure, the advantage here is that you can create proxy files before you even start editing – outside the Library or Project file. This means you don’t need to tie up storage space on your editing system carrying around master files that you don’t need at the moment, but can easily reconnect the master files when it is time to start final polishing.

Probably the most important feature, to me, is Kyno’s ability to scan my hard disk – or any group of folders on it – and find all media which is not compatible with Catalina. (If you are like me, you have no real idea of what media is affected or where it is.)

What’s ESPECIALLY important about this feature is that even if you have already upgraded Catalina, Kyno can still convert legacy footage!

The process is simple:

Then wait as Kyno scans your selected folders. I had about 10,000 clips for it to examine, so this can take a while. (On my system, it took about ten minutes to scan 10,000 files to find about 30 that needed updating. All were located on a server, a locally-attached hard disk would be faster.)

Once that process is done: 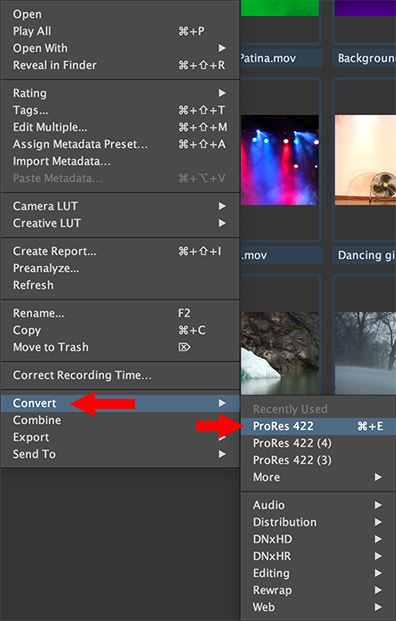 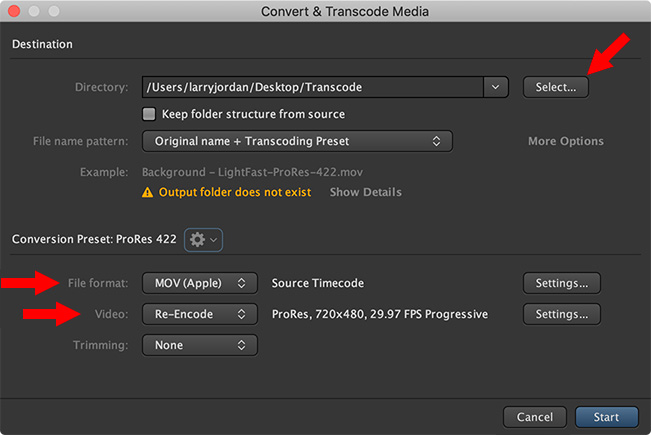 NOTE: What I also like is that if you click the Select button, you have the option to automatically store the transcoded movies back into the same folder as the source files. This makes relinking MUCH easier.

The lower-left corner of the interface provides a summary of the work in progress. 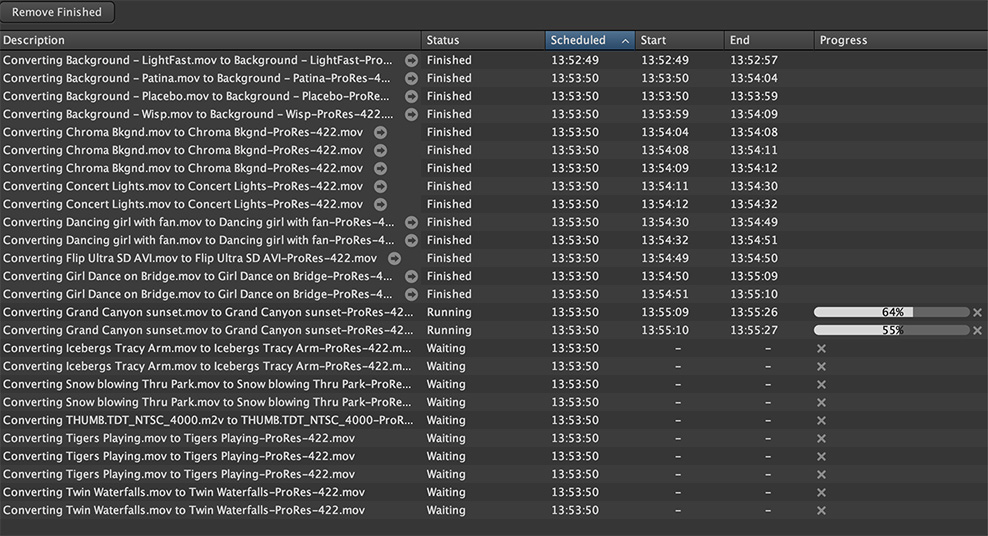 The actual transcoding was as fast or faster than Apple Compressor or Adobe Media Encoder. And, like Compressor, Kyno transcodes in the background so you can get back to reviewing clips in Kyno or editing. The actual conversion process was faster than finding the clips.

KYNO AND YOUR NLE

Specifically, drag an event containing media or projects into Kyno and all the metadata associated with that event will import along with it.

Kyno also offers full metadata support for Premiere Pro via XMP. Rating, Tags and Angle metadata will be transferred when sending to Premiere Pro (check “Write all metadata to XMP”, note that this will modify the actual clip files).

With Premiere, select the files you want to track, then choose File > Export > Final Cut Pro XML. That small XML file can be imported into Kyno, where it is automatically linked to your clips.

Here’s a partial list of what else is new in this edition:

I was extremely impressed with Kyno when it first came out. This release provides even more reason to consider Kyno for labeling, tracking, organizing and transcoding your media.