The following tip was contributed by Carleton Cole.

It’s been a number of years since Apple revamped its professional video platform creating Final Cut X. While the system has many advantages, one of the useful tools in the previous programs was eliminated; the ability to scroll text. It was a feature that was even included in Final Cut Express, so it didn’t make much sense that it wasn’t added in the migration.

However, there is a way to scroll text, although it does take some thinking. Recently, I was tasked with scrolling a number of company anniversaries in a project which meant I had to use a scroll with a music bed. To do this, I laid the background slide on the time line.

Then, using a Basic Title, I placed the top text, in this case the text containing the names of people with anniversaries, on the top layer. 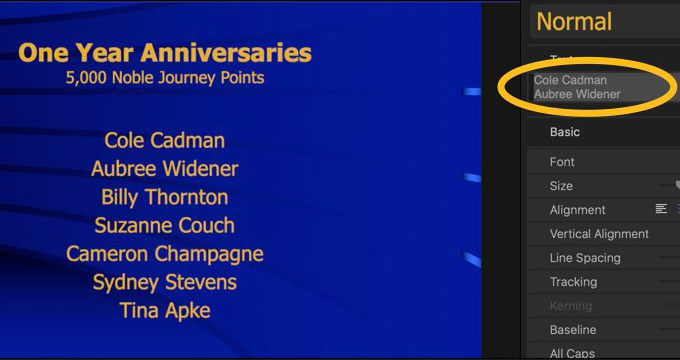 Now comes the fun part. Using the Text Inspector, add the names placing them to where they need to be when the scroll is finished.

Then go back to the beginning of the where the text starts on the timeline, and using Video Inspector > Transform, move the text frame to just under the bottom of the video viewer. FCP should make a key frame for you automatically, but you can check this by looking at the position place in the inspector. The X should be 0, while the Y is, in this case, -382.2.

In my example, I wanted the scroll to run about 7 seconds, so I gave myself a “fudge factor” of about .5 second for the scroll to stop, before moving to the next event. So in this case, about 11 frames from the next event I moved the frame from the -382.2 position to the center screen. Now because I have a title text as well, this does not mean the Y keyframe will always be 0 to have the scroll end in the center. In this case the new Y keyframe is 66.1.

(In some projects the scroll has to run through the entire event, again just position the text above the viewer making the Y keyframe +382.1 or whatever, but keep the X at 0 or otherwise the scroll will move awkwardly.)

Now, when you preview the text will scroll.

One other tip, I have found in short projects, the scroll runs pretty well, but in longer projects, like this one, it often hops in the playback and the export. To settle it down, I create the scroll in another project, export it, (“Share” using FCP parlance) and then drop the exported video back into the timeline. The experts at Apple say this step is not necessary, but take it from someone who uses FCP daily, the workaround will save you headaches.

Larry adds: Thanks, Carleton, for sharing this with us.