Configuring An iMac For Video Editing

[This article was first published in December, 2012, on my blog.]

I bought a new 27″ iMac when they went on sale Friday, specifically for video editing. And, because I’ve had a lot of requests recently, I wanted to tell you what I bought and why. 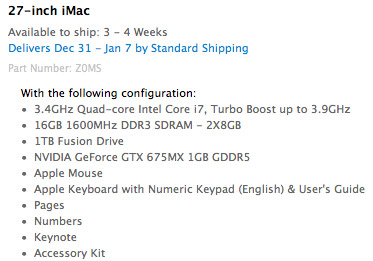 All versions of Final Cut Pro and Adobe Premiere like large screen sizes. It allows us to see more of the image with more detail. In my case, because this system is exclusively for video and audio editing, the bigger screen was an easy decision.

I also have a second 27″ Apple monitor sitting unused on a shelf that I want to experiment with. I’ve generally found dual monitor displays at client sites to be more trouble than they are worth. But, I’ve never worked with one for a long period of time, so I’m looking forward to seeing how this new setup works.

However, for my webinars, I use a smaller 21″ Mac, because I find software easier to learn when the screen sizes are kept smaller.

CPU speed is important, but it isn’t everything. The speed and connection of your storage play a much bigger role in overall system performance than the CPU. So does the speed of the graphics card.

In the old days, the CPU did all the work. Today, that load is shared between a variety of components. For this reason, I decided to get a fast CPU, but use the money I saved in not buying the fastest CPU to getting faster storage. Especially for multicam work, faster storage provides more benefits than a faster CPU.

Given the speed of today’s processors, just about any CPU is more than fast enough to edit any flavor of HD video.

I upgraded to the 1 TB Fusion drive. This new technology from Apple combines the speed of SSD (Solid State Drive) with the storage capacity of standard spinning hard disks.

However, the Fusion drive delivers the fastest speeds when it is accessing the same material over and over. This means that it is optimized for the operating system and applications. Since we are constantly changing media, a Fusion drive won’t delvier the same level of performance with our media.

I have long been a fan of storing media to a separate drive, rather than on the boot drive. In the past, this was primarily for performance reasons. Now, the internal drive is faster, but an external drive allows far more storage and flexibility.

I strongly recommend using an external RAID system, connected via USB 3, or Thunderbolt (more on that in a bit), because it will store more than any single internal drive, provided more than enough speed, protect your data using the data redundancy in the RAID, and allow easy upgrading by simply swapping out devices.

For me, the ideal situation is the Fusion drive for the OS, and an external RAID 5 for all media.

I upgraded to 16 GB of RAM. Both Premiere and FCP will use all the RAM you have available. So will video compression software. 16 GB is a nice balance between performance and price. And, unless you are creating some truly massive edits, you won’t notice enough difference between 16 and 32 GB of RAM to justify the additional cost.

Now that the new iMacs include nVidia, I’m hoping (but do NOT know for sure) that Adobe will quickly support the graphics cards in these new Macs. I’ve sent a note off to my friends at Adobe to see what I can learn and will let you know what I find out.

NOTE: Even if Adobe doesn’t support the graphics cards, Premiere Pro CS6 will run perfectly OK using just the CPU. It won’t do as much, or work as fast as when the graphics card is involved, but you can still use Premiere on these new systems.

This isn’t the fastest GPU that’s available, but it is the second fastest. Again, for me, this was a balance between performance and price. Video editing requires a fast overall system, balanced amongst all the major components.

The RAM in a graphics card determines how many elements, for example frames of video, it can store for processing.

3D software and Motion makes extensive use of GPU RAM. However, video editors are using it principally for pixel painting. Since I am an editor more than a motion graphics designer, I don’t need the extra GPU RAM. So, I stayed with the base level of 1 GB.

Wireless gear is great, until your system starts acting up. At which point, you need a wired keyboard for maintenance. Also, there are a number of very useful keyboard shortcuts in all my applications that take advantage of the keypad.

EXTERNAL STORAGE
I bought: (um, nothing yet)

Since ProRes 422 is the default video codec of Final Cut Pro X, and a great codec to use for Adobe Premiere, I need storage that is big enough and fast enough to handle this format.

Prores 422 requires about 18 MB/second of data transfer between the computer and storage. Because much of what I shoot is 3-5 camera multicam projects, this means I need to move about 100 MB/second of data.

The problem is that FireWire 800 tops out around 80-85 MB/second. Gigabit Ethernet tops out around 100 MB/second, assuming your switch and server can handle the speeds, and most data switches that cost less than $200 can’t handle that much data over a long period of time.

NOTE: A “switch” is a device that allows multiple computers to connect to the internet or a server by switching data from one device to another. These are made by NetGear, LinkSys, Cisco, and others. A “server” is a computer with a large hard disk or RAID that allows multiple computers to share the same files. Servers can be a simple as a Mac Mini, or as complex as an Avid Isis system.

This means that I need storage that connects via either USB 3, or Thunderbolt. (This is an iMac, which means that plug-in cards are not an option.) Yes, I could buy converter boxes – for example, from Thunderbolt to eSATA, or mini-SAS, but these boxes cost several hundred dollars apiece. If I were integrating existing hardware, this would be an inexpensive way to go. However, I’m buying all new gear.

It is at this point that I’m puzzled about why storage vendors are having such a hard time shipping RAID 5 Thunderbolt-based storage devices. Yes, Promise Technologies is out there, and they recently dropped their prices. But where are the traditional storage vendors? G-Technology and LaCie both offer RAID 0 (which is fast, but provides no data safety in the event one of the hard drives in the unit dies), but no RAID 5. Drobo was way late in shipping their Thunderbolt storage and I haven’t had a chance to look at the shipping product. And, as far as I know, traditional RAID vendors haven’t even announced RAID 5 storage with Thunderbolt connectivity.

It is troubling to me that this new format is taking so long to take shape and appear in quantity in the market. Is this a licensing issue? Technical or integration issues? Are there hidden problems inherent with the Thunderbolt format that are holding things up? I have been inquiring about this for months and have not gotten a clear answer from any vendor.

So, I decided to hold off buying storage until I could do more research. My iMac is still a month away from shipping, so I have some time to figure this out.

ARCHIVING
I bought: (also, nothing yet)

Long-term data storage, today, means LTO tape. The problem is that all the tape vendors – Cache-A, The Tolis Group, XENDATA – provide solutions much closer to $10,000 than to $2,000.

This is the other big issue in our industry: how do we protect the assets that we shot for 5, 10, 20 years into the future? If you are a major studio, money is no object and there are many solutions. However, if you are an independent producer, or small production company, dollars are hard to come by. There are no good archiving solutions that are reasonably priced.

I spoke with the three founders of Ultrium, the consortium of HP, IBM, and Quantum that invented LTO, about when they expect to provide Thunderbolt-based LTO storage? All three said that they had nothing to announce and the consortium did not have a position on how devices connect to computers.

Again, we could take existing gear – currently costing $7,000 – 9,000 and use Thunderbolt converter boxes to connect it to an iMac, but, this simply takes a unit which is already too expensive and makes it even more unaffordable.

NOTE: The Tolis Group announced yesterday new gear aimed at creative producers. The ArGest line supports both LTO-5 and LTO-6, and the Thunderbolt version, which still requires a converter box, starts at $6,898. (Information about this new product is not yet on their website.)

I’ve said this before and say it again: The LTO vendor that can figure how how to provide a direct-attached LTO drive that works with a Mac and connects directly via Thunderbolt for less than $4,000 is going to make a lot of money.

For now, I REALLY need some way to archive my media. but none of the units out there support either my budget or my computer.

Buying any computer is always a trade-off between dreams, performance, and budget. I’m looking forward to getting my new system. I’m also looking forward to figuring out what I can use for external storage. To me, THAT is the key to successful video editing – storage that is large, fast, secure, and affordable. That, and some way to back it all up.

I’ll keep you informed as I decide what to add for the remaining pieces. As always, feel free to share your opinions.

3 Responses to Configuring An iMac For Video Editing