I’m changing my opinions on which audio tools to use for controlling audio levels.

NOTE: While this article was written for Adobe Audition, this same filter also appears in Premiere Pro CC. The use and operation are the same, though I would apply the filter using the track mixer, rather than a adding it to a specific clip.

A BIT OF HISTORY 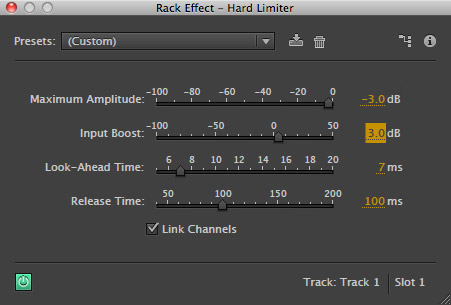 In the past, I’ve been a strong advocate for using the Limiter filter. Whether in Soundtrack Pro or Audition, the Limiter filter allows us to increase the gain of the softer passages in a clip, while guaranteeing that the louder passages don’t exceed the level that we specify.

The benefits to using the Limiter filter are that it is:

The only problems with the Limiter filter are that it can make the audio sound a bit “heavy,” or not remove all the level problems in a clip containing wide extremes in levels.

Recently, I recorded a phone interview where the dynamic range of the clip was much greater than normal and the Limiter filter just wasn’t handling it well.

Then, I remembered a conversation I had a while back with the Audition product manager at Adobe. I was extolling the virtues of the Hard Limiter when he suggested I look into using the Multiband Compressor when I needed to smooth out dynamic levels for speech.

I filed that advice under the category of: “if it ain’t broke, don’t fix it,” and did nothing. Except that, now, I had a situation where my old stand-by wasn’t working. Time to try something new. 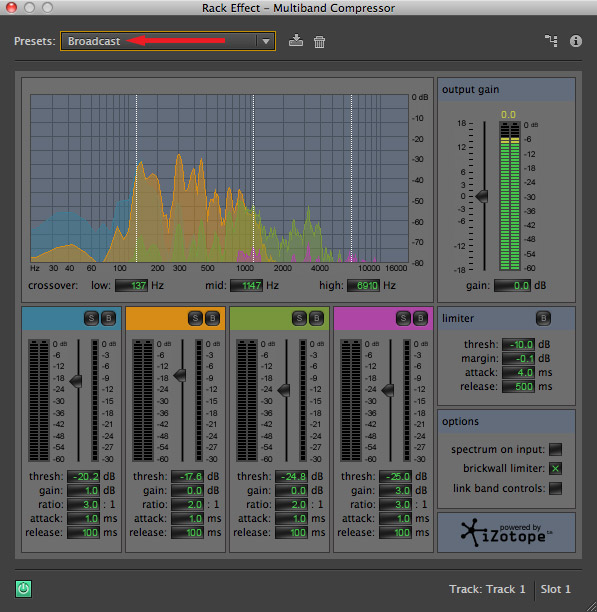 I applied the Multiband Compressor to the track, with a Broadcast preset (see the red arrow).

What a compressor does is – in very general terms – is similar to the Limiter in that it raises the softer passages of a clip, while making sure the louder passages don’t distort. But it is more sophisticated in terms of how it handles smoothing levels. 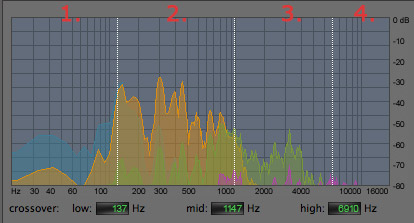 Plus, the Multiband Compressor divides the audio spectrum into four “bands,” or sections. The point where the compressor switches from one band to another is called the “cross-over” point. In the case of the Broadcast settings, these cross-over points are at:

This equates into four audio bands that correspond, in general, to:

This filter then lets us apply different amounts of amplification, compression, and limiting to each frequency band; which is something the Limiter filter can’t do. This compressor allows for a greater degree of “tuning,” or adjusting the filter to match a specific voice. 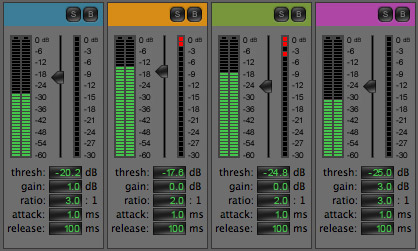 These are the compression values used by the Broadcast setting. As the audio is playing the red dots indicate when and by how much your levels are being smoothed out.

The two settings that do all the heavy lifting for a speaking voice are the two channels in the middle, with the orange and green column headers. At this point, I’m new enough to the filter that I leave all the channel settings alone. I’m looking forward in the future to understanding each control enough that I can start to modify these settings with confidence. For now, though, Adobe has done a nice job of presetting this.

However, there is a problem: the Broadcast setting generates output which is too loud if you are adding the compressed voice into a mix. By default, it creates a final output level of -0.1 dB, which doesn’t give you enough room to add sound effects or music without distorting the final output.

This is easy to adjust, but the setting you need to change is not obvious. You don’t lower the Output gain. Instead, change the Margin setting in the Limiter box. This determines the maximum output level from the filter.

My recommendations for setting this are:

I was really impressed when comparing the results of the Multiband Compressor with the Limiter. The Compressor smoothed out levels much more effectively, while still leaving the sound feeling “clear” and “open.”

Give it a try and hear the difference the Multiband Compressor can make to your mixes.

One Response to Audition: Multiband Compressor