With the release of the March, 2021, update to Premiere Pro, Adobe introduced a new caption workflow. “Premiere Pro provides a comprehensive captions toolset that lets you create edit, stylize, and export captions and subtitles in all supported formats.” (Adobe Help)

We can import existing captions or create new ones directly in Premiere. Captions appear on their own track where we can adjust them as though they were clips. (In this regard, captions in Premiere now emulate captions in Final Cut.)

Captions even have their own workspace.

NOTE: If you want to compare the new system to the earlier system, here’s an article that describes “the old way.”

Captions can only be embedded in professional codecs such as MXF OP1a, DNxHD, or ProRes and requires that the caption track format be set to one of the broadcast standards, such as CEA-608 or CEA-709.

NOTE: QuickTime embedded export currently only supports embedding CEA-608. MXF Op1a Formats can embed CEA-608, CEA-708, and Australian OP-47 (if 25fps). You will also need those track types in your sequence in order to embed. For example, if you have an SRT in sequence, that cannot be embedded. You must have a compatible format such as 608, 708 or Aus OP-47.

Due to all the different formats, please make SURE you understand what you need to deliver before creating your first caption. Position, format and text length all vary by format.

In most cases, captions are created outside of Premiere, often by a transcription service. It is generally best to add captions when the edit is complete; for example, captions, color grading and final audio mixing can all be done in parallel at the end of the edit.

SRT is a common caption format, and it’s what I have on hand, so we’ll use that for this tutorial. 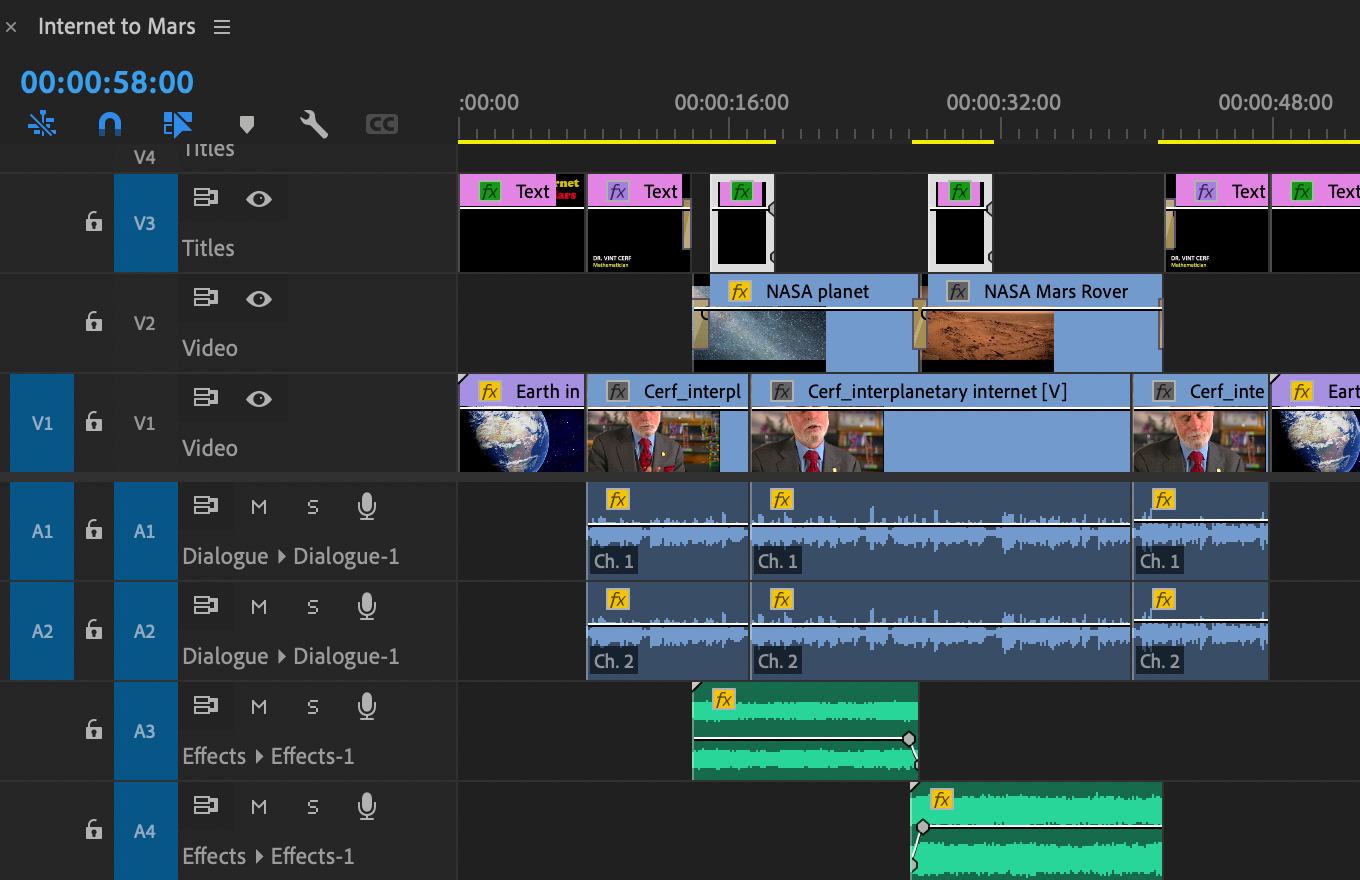 Here’s the project to which I want to add captions. The captions were created previously, so all I need to do is import them. 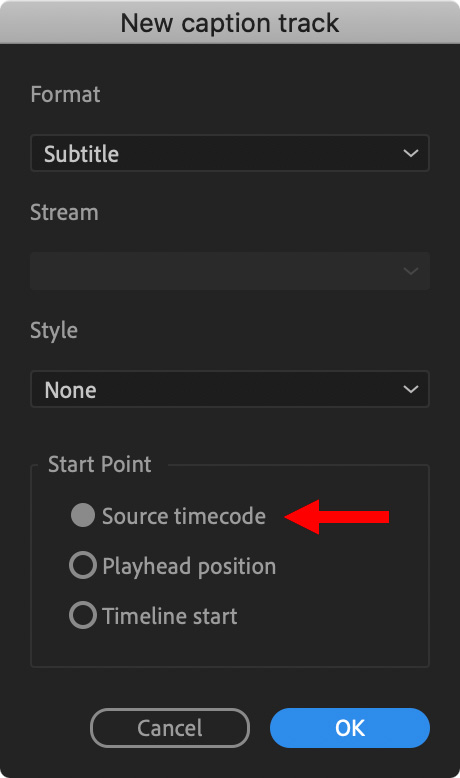 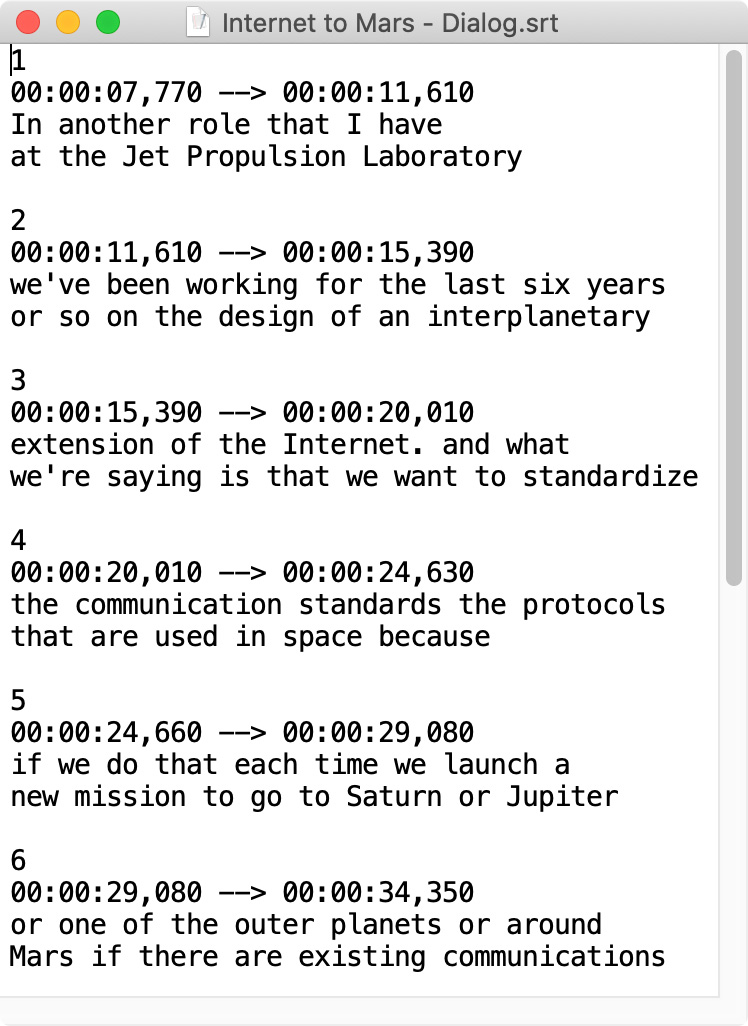 NOTE: This is what an SRT file looks like. It’s a text file with specific timecode references where each caption should start and end. (Yes, you can edit these in a text editor. Just be sure to save it as a TXT file.) 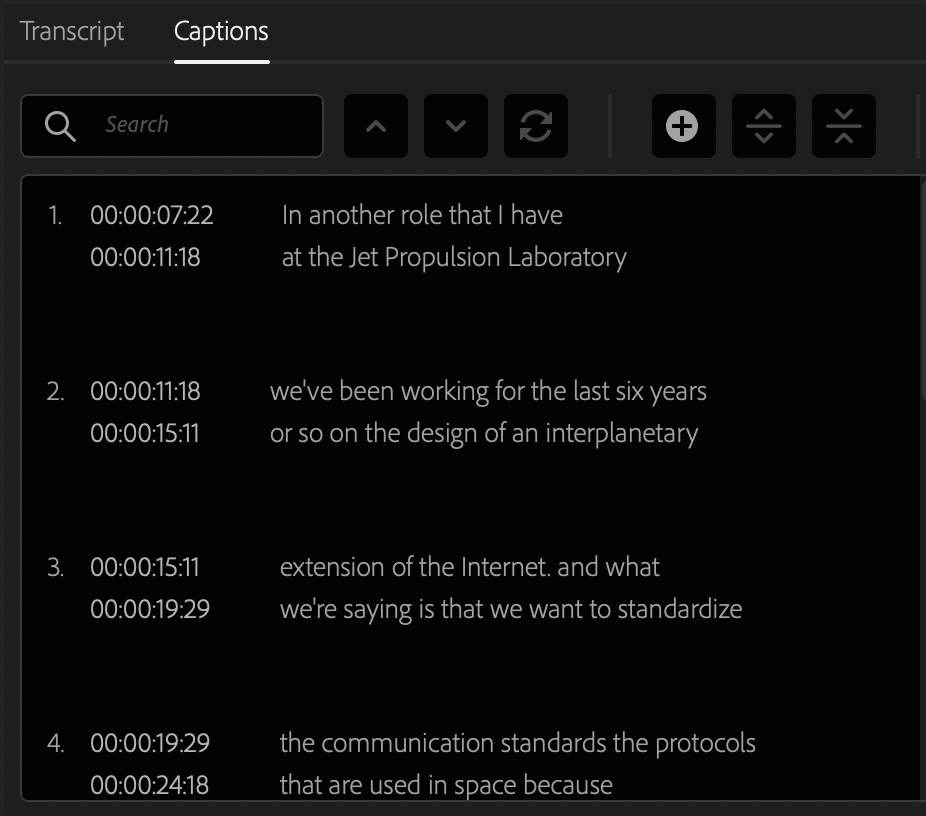 CREATE YOUR OWN CAPTIONS

To create a caption manually: 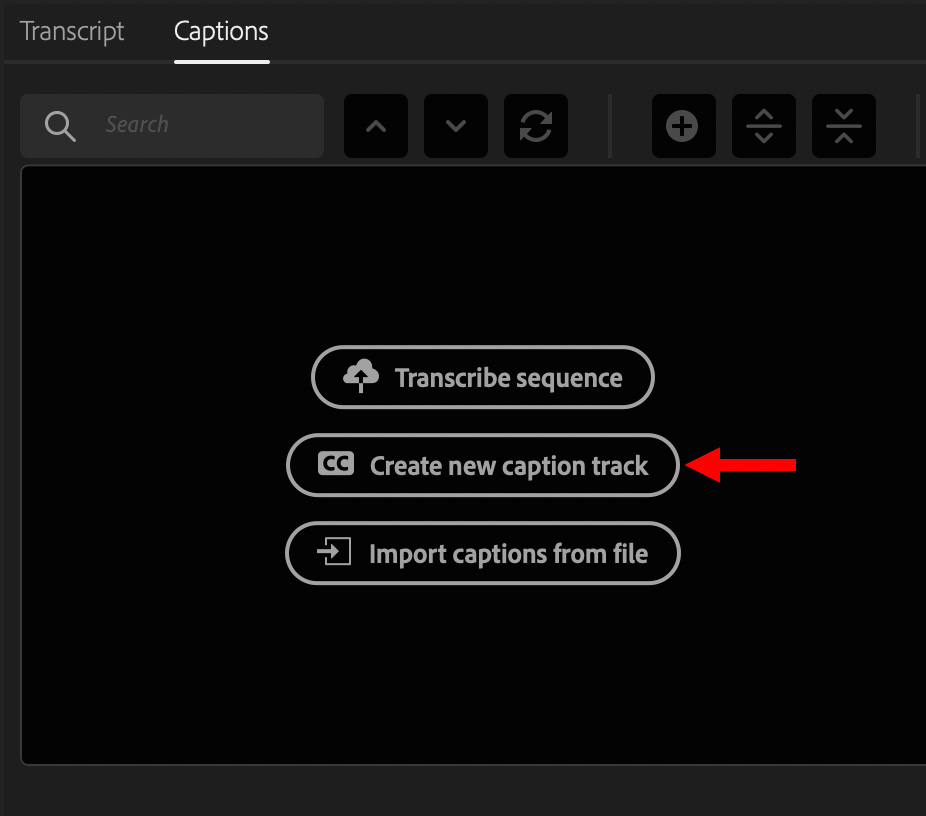 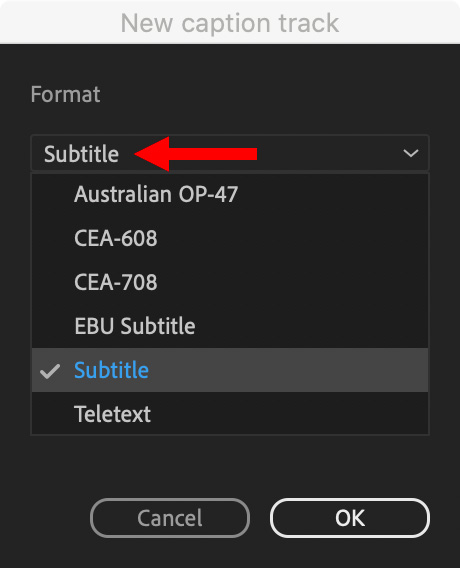 NOTE: In general, while you CAN style caption text, captions are not titles. Many services want unstyled captions. Verify what styles are supported by your distribution service. When in doubt, don’t style captions, though adjusting position, as described shortly, is always supported.

NOTE: Many captions have limits on how many characters can be in each line. In general, keep lines short and verify the line length limits, if any, with your distributor. 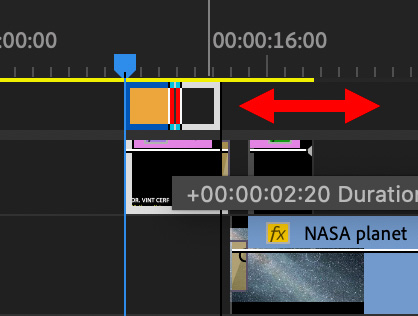 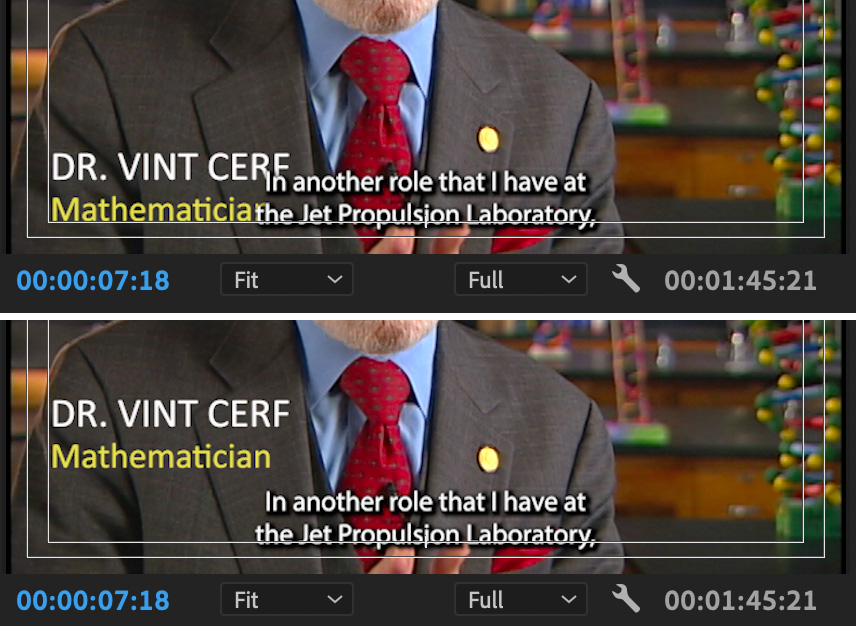 NOTE: If the caption interferes with a title, it is better to move the title than the caption. Why? Because titles have more options for position than captions. I’ll illustrate this shortly.

Repeat this process, caption by caption, until the program is complete.

NOTE: Adobe has announced that automatic speech-to-text will be supported natively in a future version of Premiere Pro.

With captions, you can:

Stylize captions by selecting the caption, then adjust settings in the Essential Graphics > Edit panel. 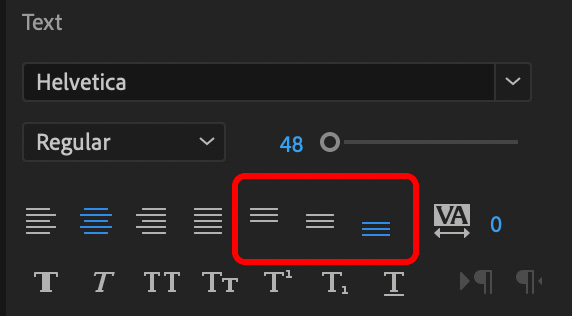 A common and useful setting is changing the vertical position of a caption by clicking one of these three position controls.

NOTE: This illustrates why it is easier to position titles than captions. Captions have very limited control over style, and only three options for vertical position.

You can also create a general style for all captions, called a Track Style. This saves all the Essential Graphic settings, including font and color, then applies it to all captions on the track.

Apply the styles you want to a single caption. 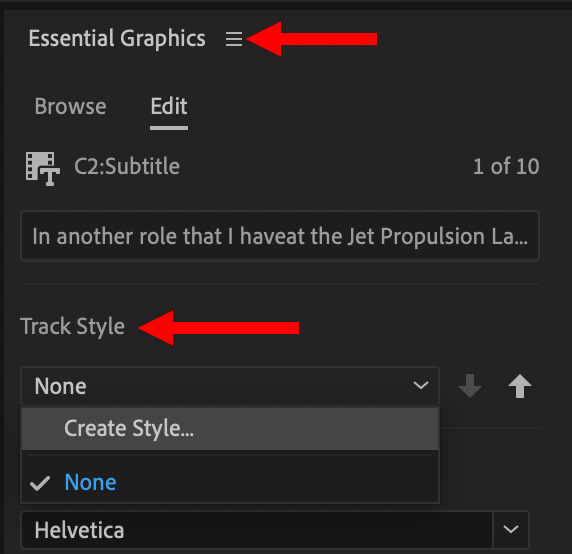 Choose Track Style > Create Style, near the top of the Essential Graphics panel.

For example, I changed the font to Hobo to create a casual look for my captions, then saved this as its own Track Style.

To apply that Track Style to all the captions in the track, click the Push to Track or Style up arrow, 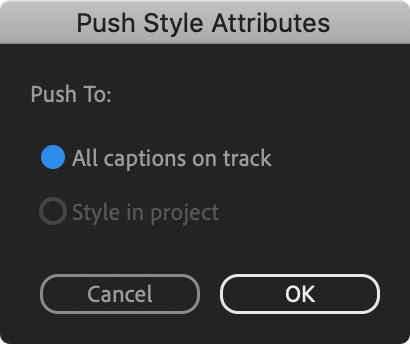 Finally, click All captions on track in the Push Style Attributes dialog. All captions in that timeline track are instantly updated.

There are three ways to export captions:

The most common, and flexible, option is a sidecar file. 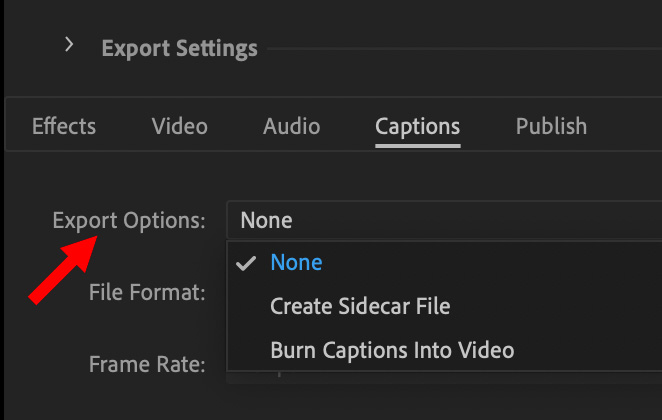 In the Captions tab, select the format you want to export.

Premiere supports a wide variety of caption formats, but, for social media, a SubRip Subtitle Format (SRT) is very common.

While SRT files can support text styling, the ultimate support must be provided by the distributor playing your files, not you. In general, assume that SRT files are not styled, until you confirm otherwise.

And that’s it. While it seems like a lot of work, the actual work is in creating the subtitle text itself. This is why creating captions via automatic speech-to-text is so exciting – it takes the hardest and slowest part of this process and animates it.

The new caption workflow is much better than the old one. The ability to work with captions both as a track and as individual clips gives us much more control. And the overall performance improvement is impressive.

Here’s a link to the Adobe Help on Captions