The Choice Between Streamed vs. Theaters is Fading

[NOTE: Andy Marken is an internationally recognized marketing/communications consultant with a broad range of technical and industry expertise in storage, storage management and film/video production.]

Netflix’s Reid Hastings had the streaming stage to himself since about 2000 but it got so crowded that this year, the board “encouraged” Ted Sandaros to join him as co-CEO and the two are confident the stage can hold all the new folks that joined them.

First, it was just the new members of the FAANGD mob ((Facebook, Amazon, Apple, Google/YouTube, Netflix, Disney) and China’s BAT squad (Baidu, Alibaba, Tencent); but it didn’t take much for everyone in the M&E industry to figure out that this streaming thing was here to stay.

Even the grossly undernourished AMC theater chain figured out that instead of kicking dirt at Universal for taking Trolls World Tour direct to the consumer first before letting theaters have it, they would join the streaming crowd and offer up a PVOD package and ultimately give folks a choice – put your seat in our seats or enjoy the stuff at home.

Coming off a quarterly loss of $170M and barely a glimmer of light for theater openings, Cinemark is… “In discussions.”

Since seemingly the beginning of time, studios had essentially released their films first in theaters for several months before making them available to “second class” video outlets.

In fact, a pre-qualification to be considered for an Academy Award is that film is released to a commercial theater in Los Angeles County for at least seven days and be shown three times a day.

For folks like Universal’s, Trolls, a PVOD take of $100M isn’t a big thing but they broke (at least cracked) one of Hollywood’s greatest taboos.

Who knows, it could turn out to be a good disaster for the entire industry.

“Suddenly there are no rules,” Michael Goodman, Strategy Analytics’ Director of TV & Media Strategies, said. “We’re in a new Wild West with cinemas shuttered by months of pandemic, a world of entertainment hungry/bored people and a constantly shifting schedule of major and minor theater (audience)-ready films.”

The realignment of the theatrical/home release dates has been one which Netflix has long insisted needs to change and the pandemic disruption could help all parties realign their positions/goals.

The unplanned shift could be an opportunity for content creators/distributors, cinema chains and VOD services to take a closer look at the best way to get in touch and stay in touch with customers.

The tough part for industry players to remember is that delivering content directly to a person’s screen doesn’t make them a target but a partner in their new M&E ecosystem. 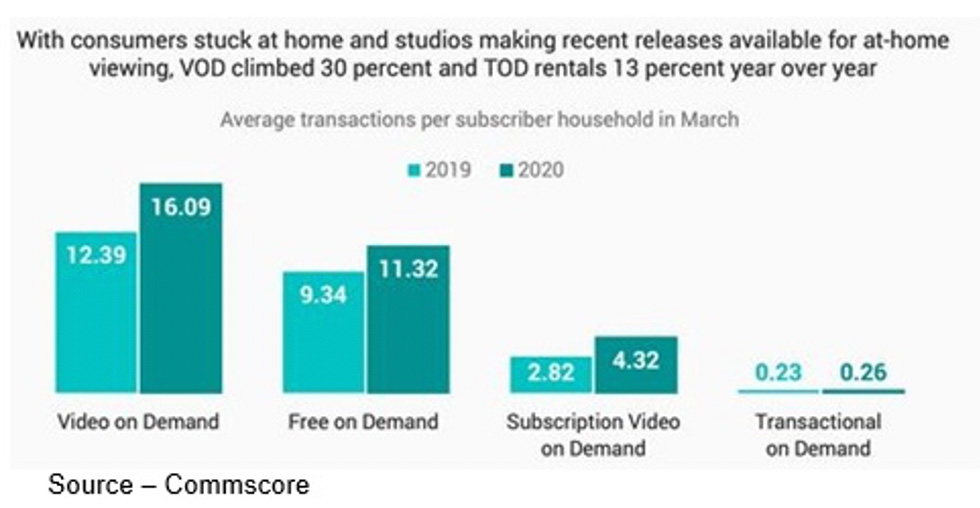 Across the Board – Video on demand (ad-supported, subscription and transaction) expanded rapidly following the pandemic lockdown while PayTV continued its decline.

“All major streamers saw their subscription numbers increase during the lockdown,” Goodman noted.

According to Morning Consult, nearly half of consumers (49 percent) say they are streaming more since the outbreak with 21 percent of adults subscribing to new services.

The subscribers predominantly flocked to a few streaming providers — Netflix, Disney+, Hulu and Amazon Prime Video accounted for about a quarter of the new subscriptions.

Leaderboard – Netflix maintained its streaming leadership over the other major streaming outlets (Hulu, Amazon Prime, Disney+) and an aggressive number of new subscription and ad-supported options entered the picture.

“Netflix has dominated the streaming landscape for years,” Goldman commented, “and they continue to be the target everyone is aiming at having added a record 15.8M new subscribers just in Q1 with a global total of 183M subscribers.

Co-CEOs Reid Hastings and Ted Sarandos emphasized that home entertainment services such as Netflix were temporarily higher because of the lockdown but that the company has a strong inventory of new content scheduled through next year to ensure they remain number one globally. 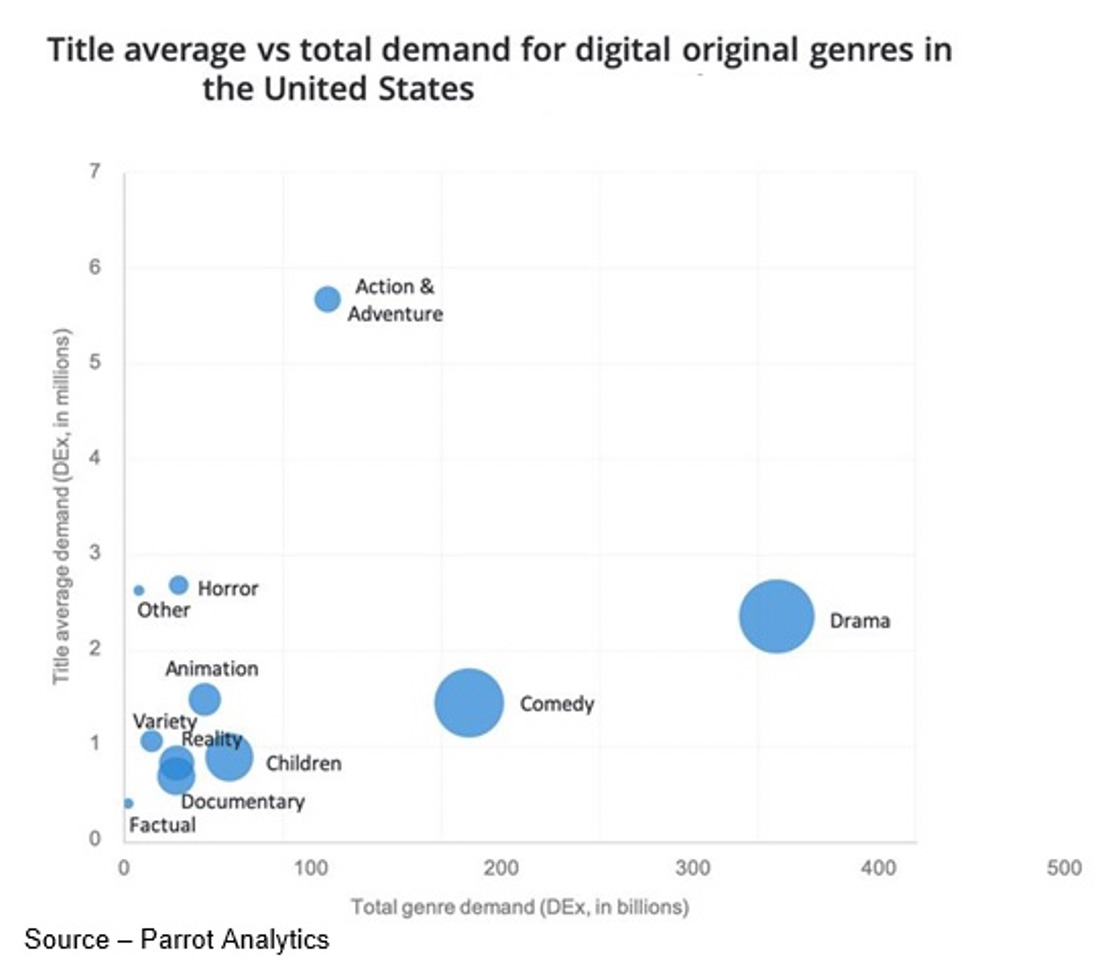 One of the major advantages Netflix has is a wide and deep treasure trove of viewing data that enables them to ensure they always have a healthy balance of genre topics to meet existing and prospective subscriber tastes.

People are attracted to streaming services by social media, but the personal recommendations of friends and family convince people to subscribe to specific SVODs and their entertainment offerings.

With 78 percent of Disney+’s new subscribers and 75 percent or more of Hulu’s and Amazon Prime Video’s, they continue to keep a sharp eye on the folks planning to expand their entertainment options in their rearview mirror.

At the same time, Disney+ is expanding at a breakneck speed with a growing base of viewers in the Americas as well as successfully debuting in a number of European countries and India.

In India, Hotstar, Disney+’s premium online service, drew eight million subscribers in the first week, placing increased pressure on Netflix in a country that is important to both firms since it is the third largest entertainment market in the world behind the US and China respectively.

StrategicAnalytics’ Goodman estimates that India’s online offerings will account for more than $4B in revenue by 2025.

With ARPU (average revenue per user) of $1, Disney+Hotstar could reach $587M in subscription revenues during the same period plus $314M in ad sales to become India’s second largest online video service behind YouTube.

With their parks division taking a $3.5B hit, Disneyland Paris and Disneyland Orlando as well as parks in China have been partially reopened. With a large number of questions surrounding when cinemas will open and the rush for seats in seats, Disney+ took a lesson from Universal, moving the widely anticipated and promoted Mulan to a $29.99 PVOD showing in the US and select markets.

Already delayed multiple times because of the pandemic, the $200M film was shown in cinemas in countries where it isn’t available on video on demand.

In addition to rolling out an aggressive – and widely enjoyed – roster of streaming entertainment to more than 70M subscribers worldwide, Disney also has major films they would still like to get into global cinemas. 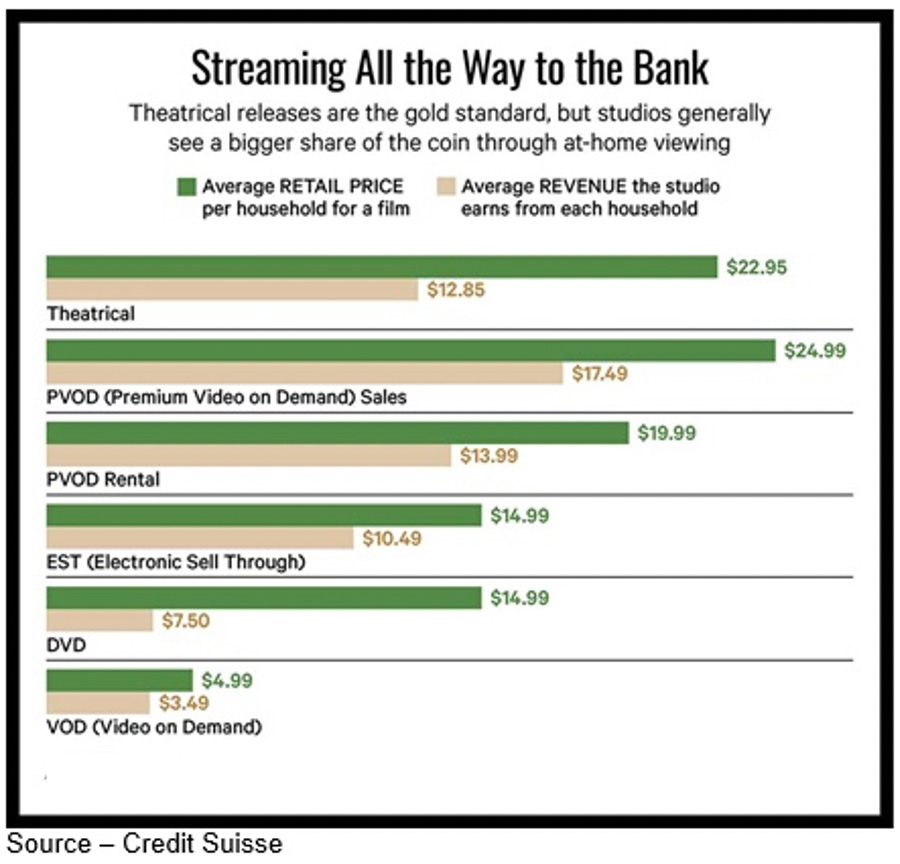 Window Change – While studios and theaters have long disagreed on the length of the exclusivity showing window and the division of box office receipts, the growth of streaming content and global shutdown of entertainment venues changed the flow of the discussion, which ultimately will be best for everyone including the consumer.

Disney, like all of the studios, has been less than optimistic about cinemas reopening, how audiences will respond to the viewing restrictions that are being laid out (attendance in Japan and China has been remarkably unimpressive) and how consumers will respond if a second wave of infections force theaters to close yet again.

“While all of the studios are committed to seeing cinemas reopen and become an integral part of the M&E scene, there are practical business decisions that have to be made with the number of tentpole and secondary films that are gathering dust in their libraries,” Goodman commented. “The libraries represent major financial investments that need to be covered and recovered.

“The pandemic’s new realities forced everyone in the M&E ecosystem into experimenting with new tech-driven home-centric entertainment,” he continued. “The out-of-home entertainment experiences won’t disappear once we can open our doors and smell the fresh air. Most of us still like to get out, rub shoulders and travel in addition to going out for the evening, having a good dinner and attending a good movie.

“The big question marks for all of us are when can we do it and how long we’ll feel comfortable doing it,” he noted.

“Movie theaters won’t vanish as a result of the new realities,” Goodman emphasized. “They will just be different … a lot different.”

Ampere reported that titles that are expected to gain the largest international box office revenues (over $700M) have not been released on PVOD including such titles as Wonder Woman 1984, No Time to Die, A Quiet Place II, Fast and Furious 9, Antlers, Black Widow, Thor: Love and Thunder, Jurassic World: Dominion and other major projects that are still scheduled to be experienced first in the theater.

Slightly lower-earning films ($400 – $750 M) will be squeezed into the cinematic schedule or offered PVOD.

In the Americas and Europe, digital transaction – PVOD – is accepted and viable avenue for gaining added income.

However, about 40 per cent of box office revenues come from markets like China, Brazil and India, where box office is more widely accepted, so PVOD probably won’t be adopted globally.

But for the longer term, the option of theater-first alternatives will place added pressure on cinema chains to become more flexible on the exclusivity window and the division of box office receipts.

The new normal is anything but normal and all of the participants will have to test and experiment to find the options that work best for them in satisfying the consumer’s entertainment appetite.

Andy Marken – andy@markencom.com – is an author of more than 600 articles on management, marketing, communications and industry trends in media & entertainment, as well as consumer electronics, software and applications. An internationally recognized marketing/communications consultant with a broad range of technical and industry expertise in storage, storage management and film/video production fields; he has an extended range of relationships with business, industry trade press, online media and industry analysts/consultants.