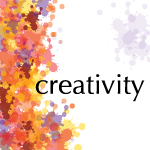 Why? Because I believe that creativity works best when it has something to push against; a deadline, a budget, a physical limit, a technical limit, or an intractable subject.

Consider Michelangelo painting the Sistine chapel; one of the finest examples of creative art ever produced. The process involved slapping wet plaster on the ceiling over his head, then painting it before the plaster dried. By candlelight, standing on a wooden scaffold, creating images that fit within all the curves and angles of the ceiling, all while fighting continuously with his client, the pope.

Or, more recently, Andy Warhol redefined fine art in 1962 with the first showing of his 32 Campbell’s Soup Cans. He decided to use a very primitive form of silk-screening, where the images were created from a drawing which was transferred onto silk covered with glue. One screen for each color. The glue was then carefully removed from the sections where the paint would be squeezed through to the canvas. These silk screens were created before photographs were used to simplify the image creation process. It was a very painstaking process.

If an artist were given unlimited time or unlimited resources, I don’t think they would release another work; they would become trapped in the endless cycle of making it “better.” Millions of home movies attest to this – they are never finished editing because there are no deadlines with constant opportunities to tweak.

Jan Fedorenko, the senior media manager for WLS-TV in Chicago, captured this best in a quote from my 2011 Editing Truths contest: “It’s better than good, its done.”

The Holy Grail for creative artists isn’t “creativity without boundaries,” but discovering where the boundaries are and pushing against them. The creative friction between our ideas and reality is what creates art.

Whether we are fighting a deadline, a small budget, inadequate tools, or bad management, limitations ignite our creativity. Rather than trying to find ways to remove limits, it may be better for artists to seek them out. No limits too often turns into endless revisions without completion.

Creativity without boundaries has no value, because it accomplishes nothing. Art lies in the conflict between the idea, the tools and the reality surrounding any creative endeavor; though it can be hard to be grateful for this challenge when you are staring at a blank screen with the deadline an hour away.

On the other hand, sometimes the best art happens just as time runs out.