Vary the Speed of Video Playback in Final Cut Pro

[I’ve been using Final Cut since it was first released and only when writing this tutorial did I discover a new way to create speed changes. There’s always something new to learn… ]

Changing the speed of a portion of a video clip during playback is called a “variable speed change.” It is commonly used to slow playback to create a dramatic effect, or faster to create a comic effect. Final Cut can create both.

There’s a wide variety of reasons to change the speed of a clip, so let me show you different ways to create and modify these.

NOTE: Changing the speed of the entire clip, by the same amount, is called a “constant speed change.” A variable speed change means that clip speed varies within the clip during playback. 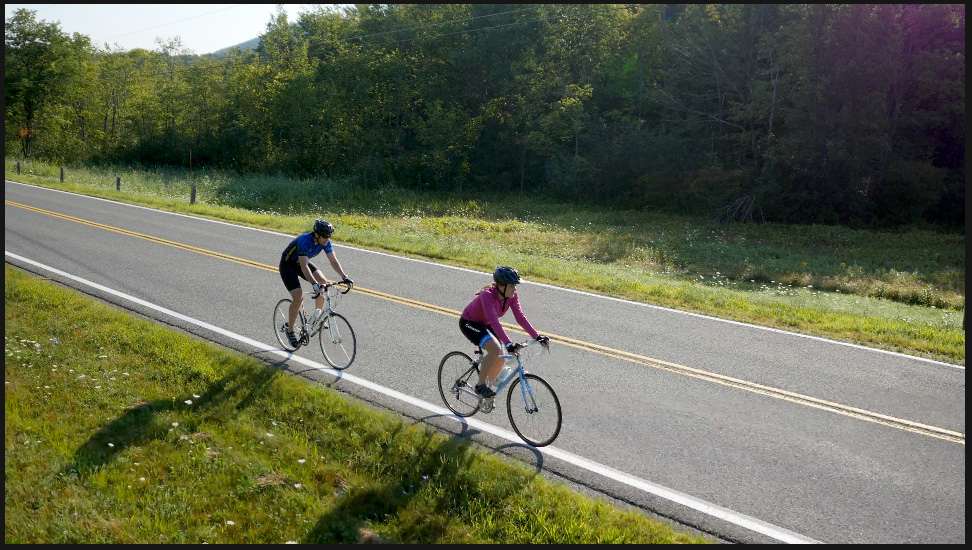 Here’s a drone shot tracking a couple bicycling in the Berkshires, in Massachusetts. The tracking itself is lovely, but what would make this shot even more interesting is to slow their movement as they get closer to the camera.

After adding the clip to the timeline, use the Range tool (Shortcut: R) to select the region of the clip that you want to slow.

Go to Modify > Retime > Slow > 50% to create slow motion or Fast > 2X to create fast motion. (You can easily change the speed later, which I’ll show you in a minute.) 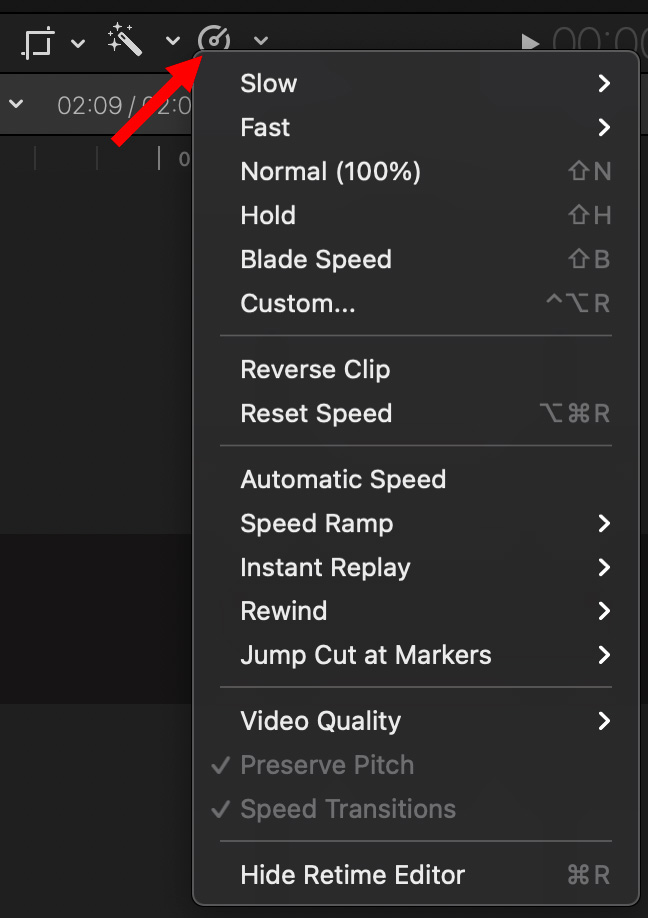 NOTE: Although this article references the Modify menu, I never use it in regular practice. Instead, I click the small “stopwatch” icon in the lower left corner of the Viewer. The menu of this shortcut is identical to the Modify > Retime menu, but faster to reach.

Several things happen at once:

When you play the clip, the cyclists start at full speed, gradually slow to 50%, travel at half speed for a bit, then speed back up to full speed.

To adjust the duration of a speed transition, drag one of the edges of the gray bar left or right. (In this screen shot, I made the right side shorter – it centers on the thumb.)

To change the speed of a slowed portion, drag the black vertical thumb (red arrow) at the right edge of the orange retiming bar left (to speed the section up) or right (to slow the section down).

The new speed is reflected in the percentage label in the bar: “Slow (60%)” in this screen shot. 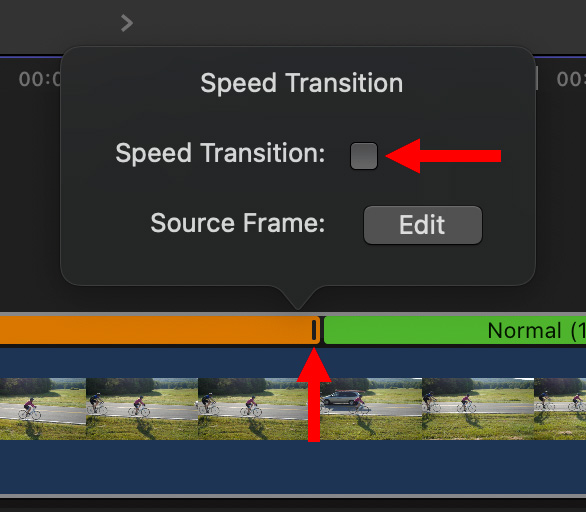 To remove a speed transition, so that the speed of a clip changes instantly, double-click the black thumb to display this window. Uncheck Speed Transition. 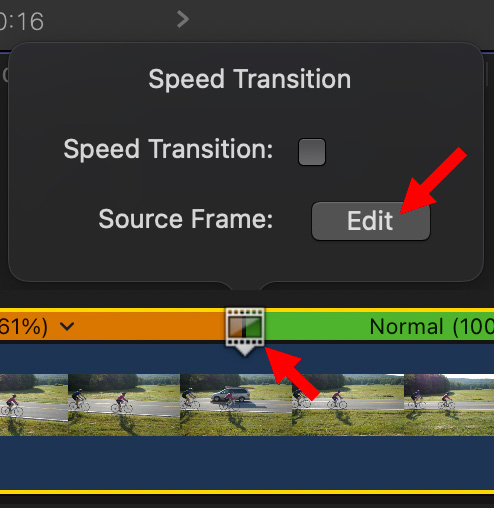 This type of speed change is easy to create and VERY flexible. 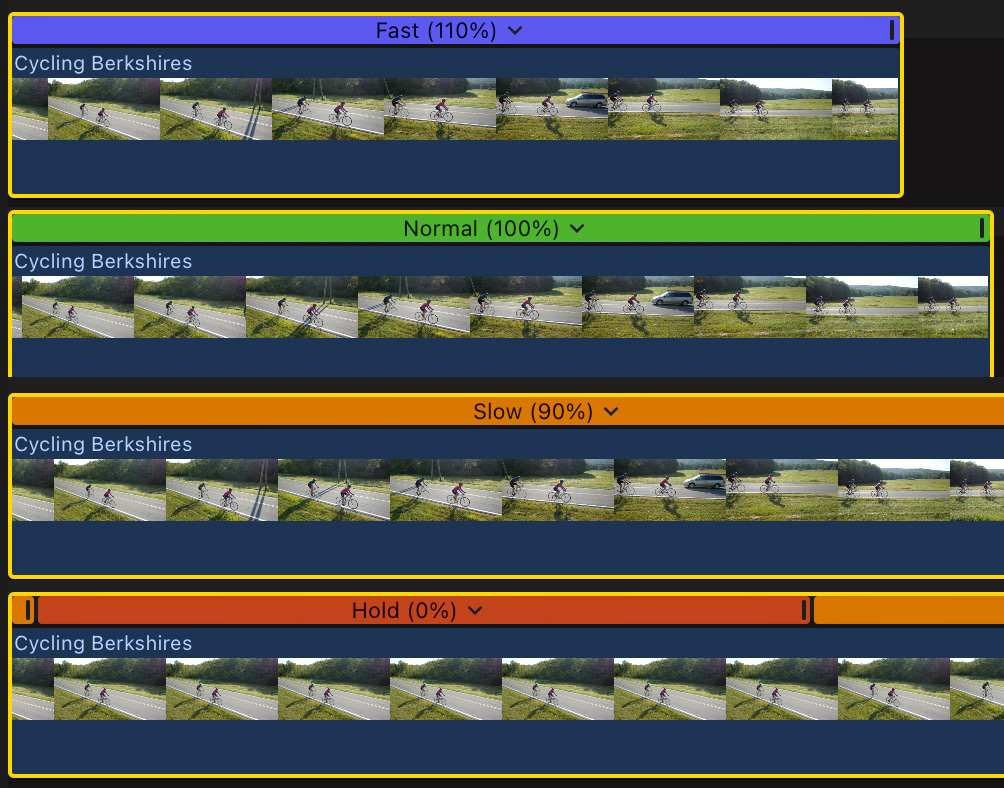 NOTE: The Retiming bar uses color to indicate the speed of a clip

EASING INTO A SPEED CHANGE.

Normally, a speed transition is all you need to ease into a speed change. However, Final Cut provides a special transition called “Speed Ramps,” which allow for longer, more gradual speed transitions to or from a still frame. (Apple calls these stationary frames “Hold frames.”)

The process is similar: 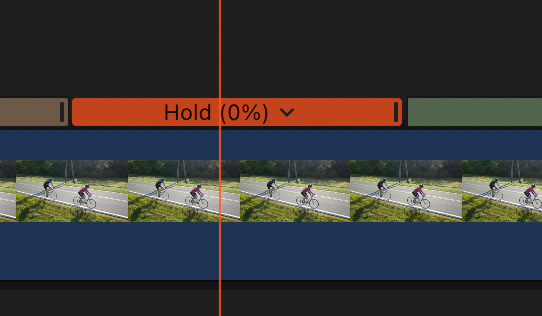 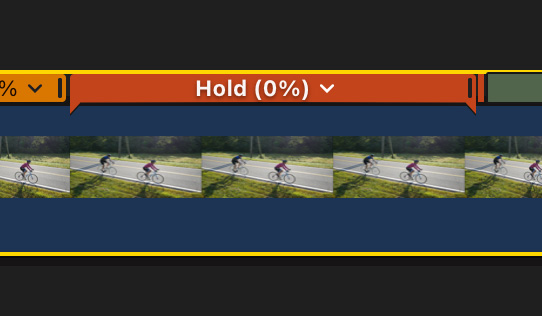 A speed change can only be done inside a single clip. But, what if you want to slow a sequence of clips? You can, here’s how.

Again, select a range across the compound clip, then choose Modify > Retime > Slow (or) Fast along with the speed you want.