The Value of Adding More RAM for Video Editing

Jacek sent me an interesting question this morning:

The way most NLEs work is that, during an edit, the software will load (“buffer”) a portion of a clip into RAM. This allows for smoother playback and skimming, as you drag your playhead across the timeline.

When a clip is loaded into RAM, it is uncompressed, allowing each pixel to be processed individually. This means that the amount of RAM used for buffering depends upon several factors:

This graph illustrates this. It displays the MB required per second to cache 8-bit video into RAM. 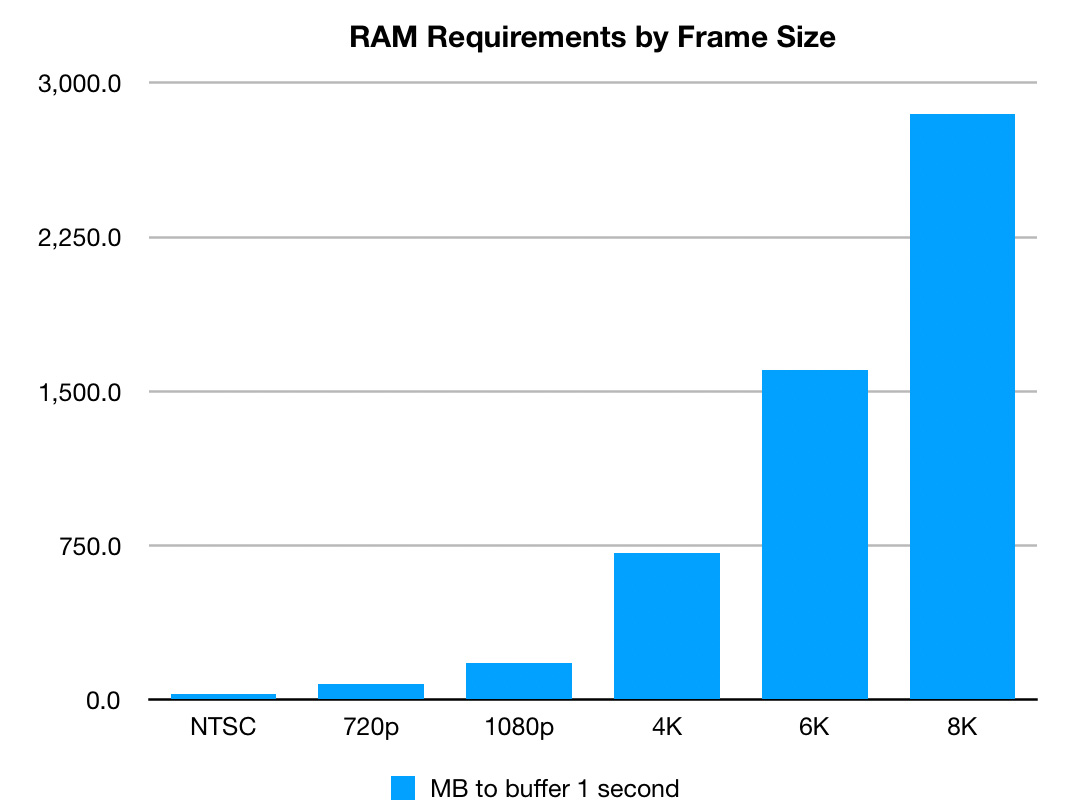 (Frame rates are calculated at 30 fps for all frame sizes. Each bar represents a single clip. Click to see a larger image.)

As you can see, RAM requirements skyrocket with frame size. Also, these numbers increase when you have multiple clips playing at the same time.

NOTE: These numbers also increase as bit-depth increases, however the proportions remain the same.

Here’s a table that illustrates the numbers behind the chart.

Obviously, you need more RAM as frame sizes increase or more clips are playing at once (for example, in a multicam edit). Also, most NLEs will load more of each clip into RAM, if the RAM is available.

Activity Monitor is a very helpful tool to help us determine our RAM usage. 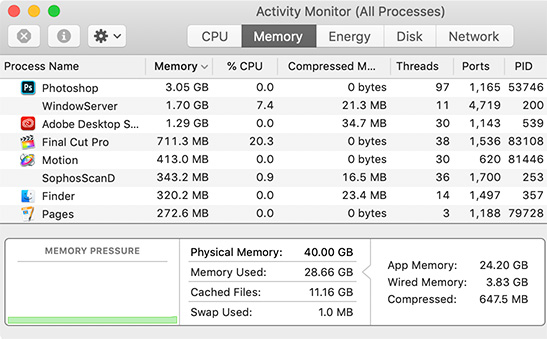 Click the Memory tab at the top to display all the currently-running applications and the amount of memory each is using.

The key section is at the bottom. The Memory Pressure graph helps illustrate the availability of memory resources. The graph moves from right to left and updates at the intervals set in View > Update Frequency. The current state of memory resources is indicated by the color at the right side of the graph:

Here are definitions of the other statistics:

Your goal is to have as little red in the graph or as little Swap as possible. Why? Because while RAM is very fast, swapping files to the hard disk (even an SSD) is very slow and degrades the performance of your system.

If Swap is always a large number, your performance may benefit from using a system with more RAM.

As we’ve seen, the amount of RAM you need varies, depending upon the type of editing you are doing.

Anything more than 64 GB of RAM won’t hurt, but you won’t see any significant improvement in performance; especially considering the cost of more RAM.