The reason you buy a dock for your computer is that you need more ports than your computer itself provides. In my case, I needed more USB-A ports and a faster hardwire connection to my network servers.

When CalDigit released its Thunderbolt Station 4 (TS4) Thunderbolt dock earlier this year, I instantly wanted one. My new 16″ MacBook Pro had more ports than ever, but it wasn’t enough. The TS4 features 18 ports, along with a 2.5G Ethernet connection. This would greatly expand the gear I could connect to my 16″ MacBook Pro. However, it was so popular that it was consistently sold out.

Still, I wanted one. A lot. But, could it handle my workload? I contacted the folks at CalDigit asking if I could review a unit for a couple of weeks. They graciously loaned me one and I spent the last two weeks testing it.

What I discovered is that the TS4 not only has far more ports than my MacBook, it is significantly faster. But that capability comes with a price, which I’ll talk about shortly.

NOTE: This is the computer I’m using for this review. 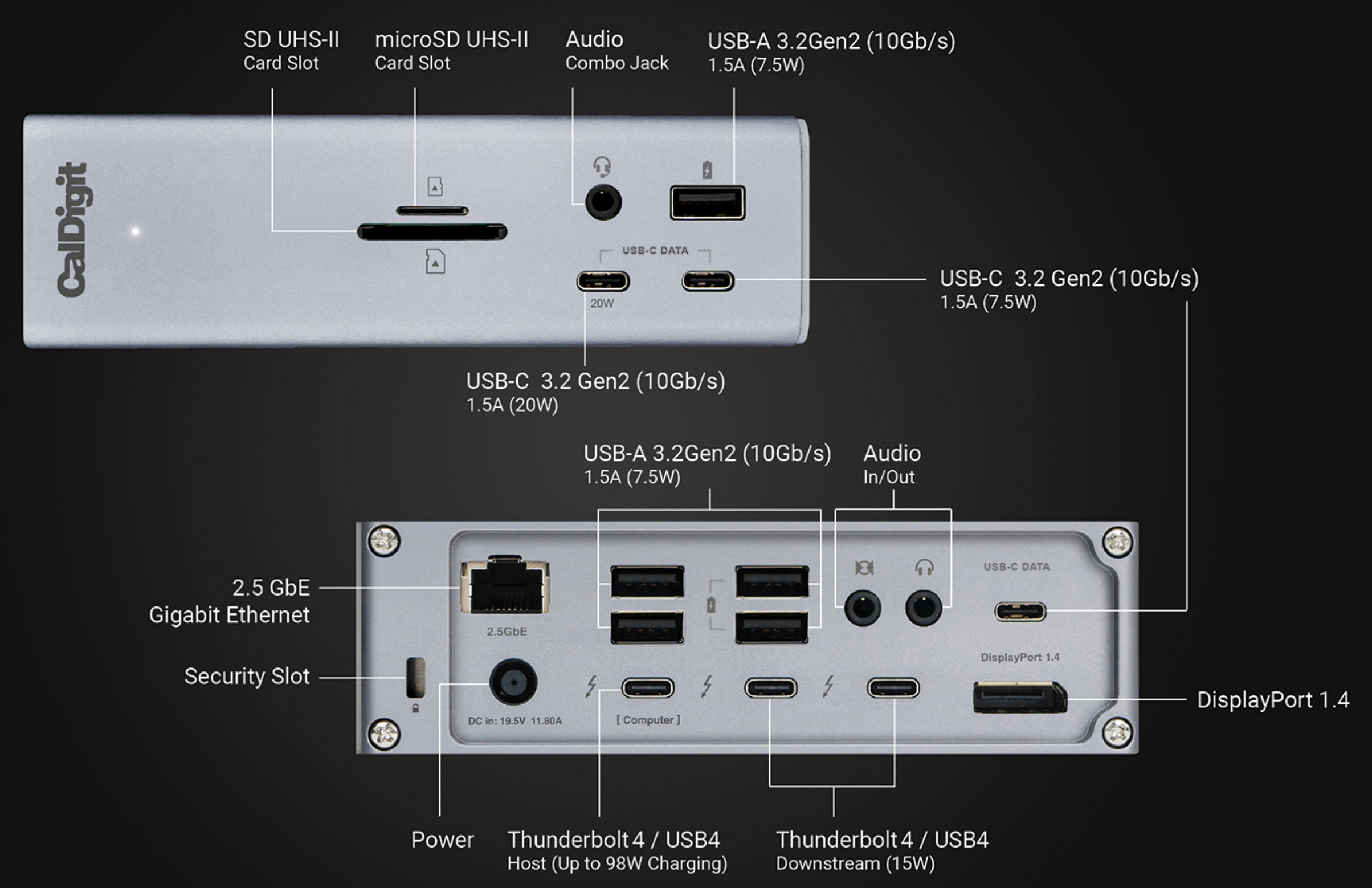 The CalDigit Thunderbolt Station 4 (TS4) connects to any Mac or Windows system that has a Thunderbolt 4 port. That includes all the M-series Macs. Providing up to 98 watts of laptop charging, it also includes 18 ports:

The unit is AC powered using a small transformer “brick” that sits on the floor.

When I tested the unit for speed, every port on the TS4 was faster than the same port on my MacBook Pro! 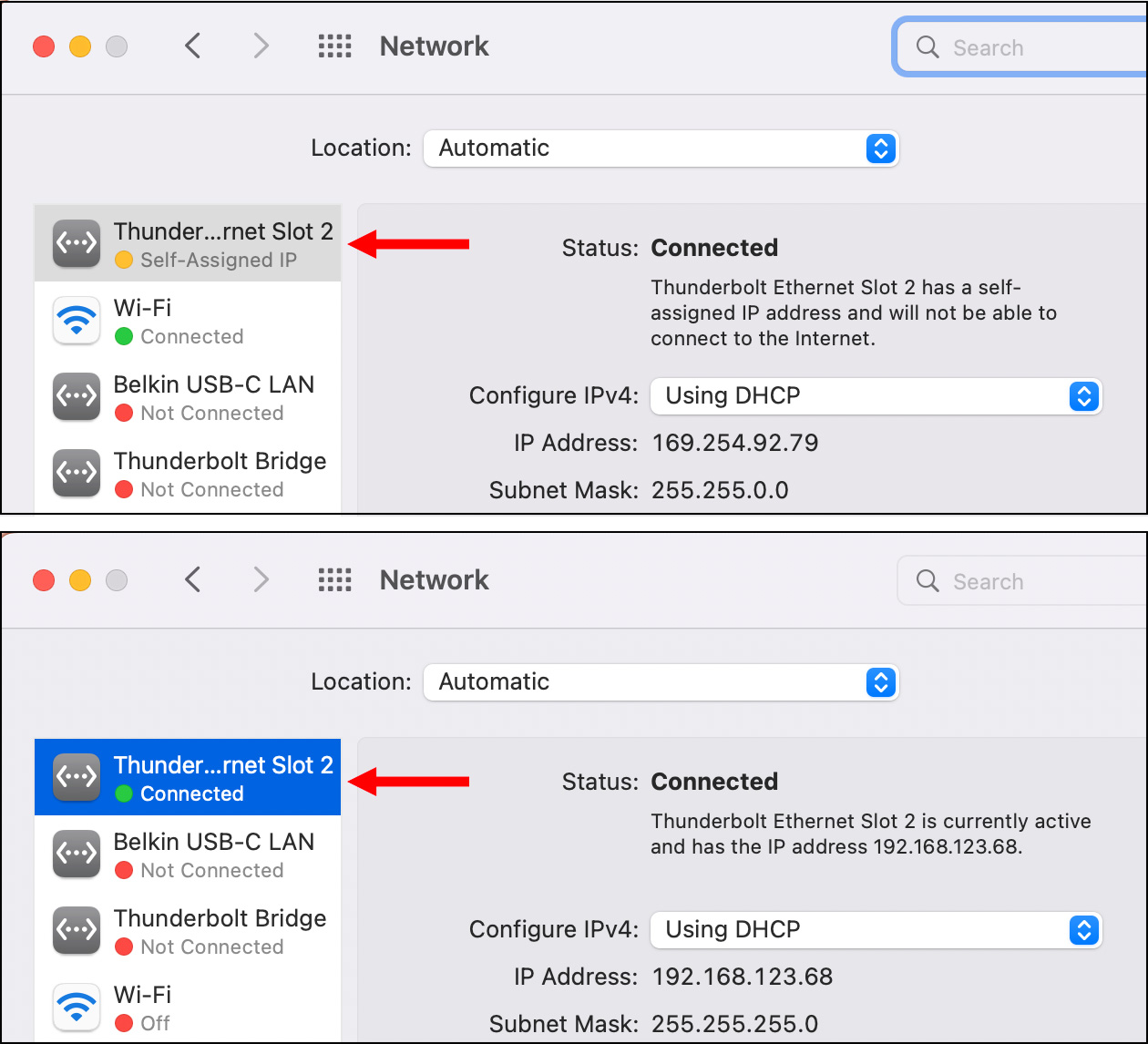 The big problem this causes is networking. In the image above, the yellow dot next to Thunderbolt Slot 2 means that the dock is connected to the computer, but it lost the network. The bottom image, with the green dot, shows that everything is properly connected and active.

Losing connection with the network could, depending on your system, improperly disconnect servers or cancel any background process that accesses the web.

NOTE: This connectivity issue seems to be a general problem with Thunderbolt docks in general. I’m getting reports from other editors of docks – not from CalDigit – not fully waking from sleep.

As I was writing this review, CalDigit sent me a note saying: “The Ethernet issue is being worked on and will be resolved in a future update. The workaround for now is to turn off the Mac rather than sleep. It seems to relate exclusively to Macs.”

The CalDigit TS4 is not perfect. The intermittent nature of Thunderbolt waking from sleep is a concern. But, wow!, for just about everything else, this dock is amazing! 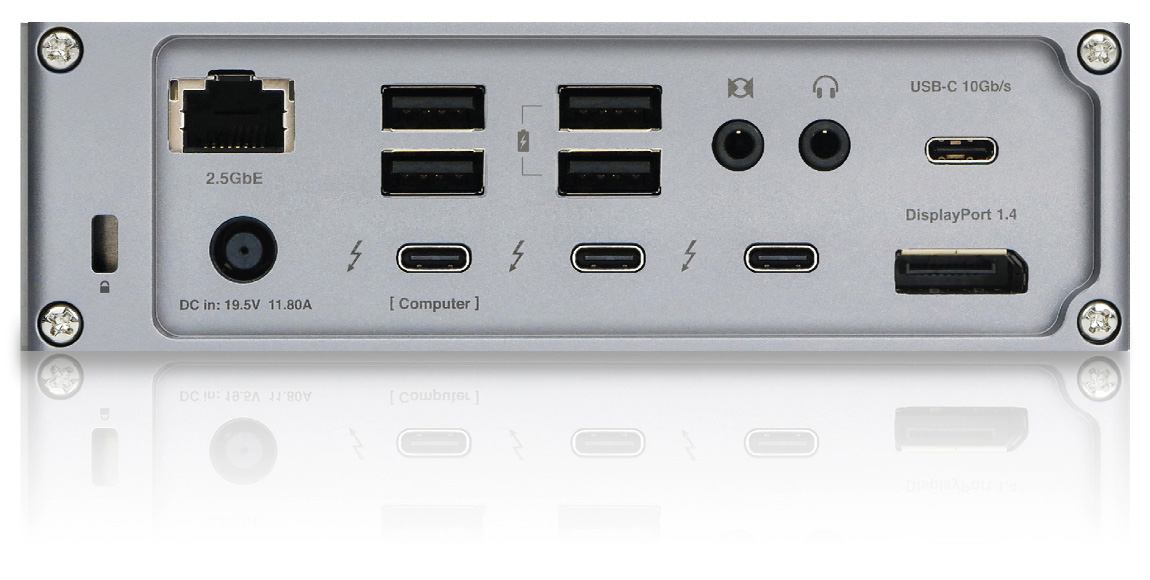 The TS4 is slightly smaller than a paperback book. It can sit vertically or horizontally on a desk. It comes with it’s own 30-inch (76 cm) Thunderbolt 4 cable.

Installation is simplicity itself:

There are no drivers or software to install. The Mac recognizes the dock almost instantly. 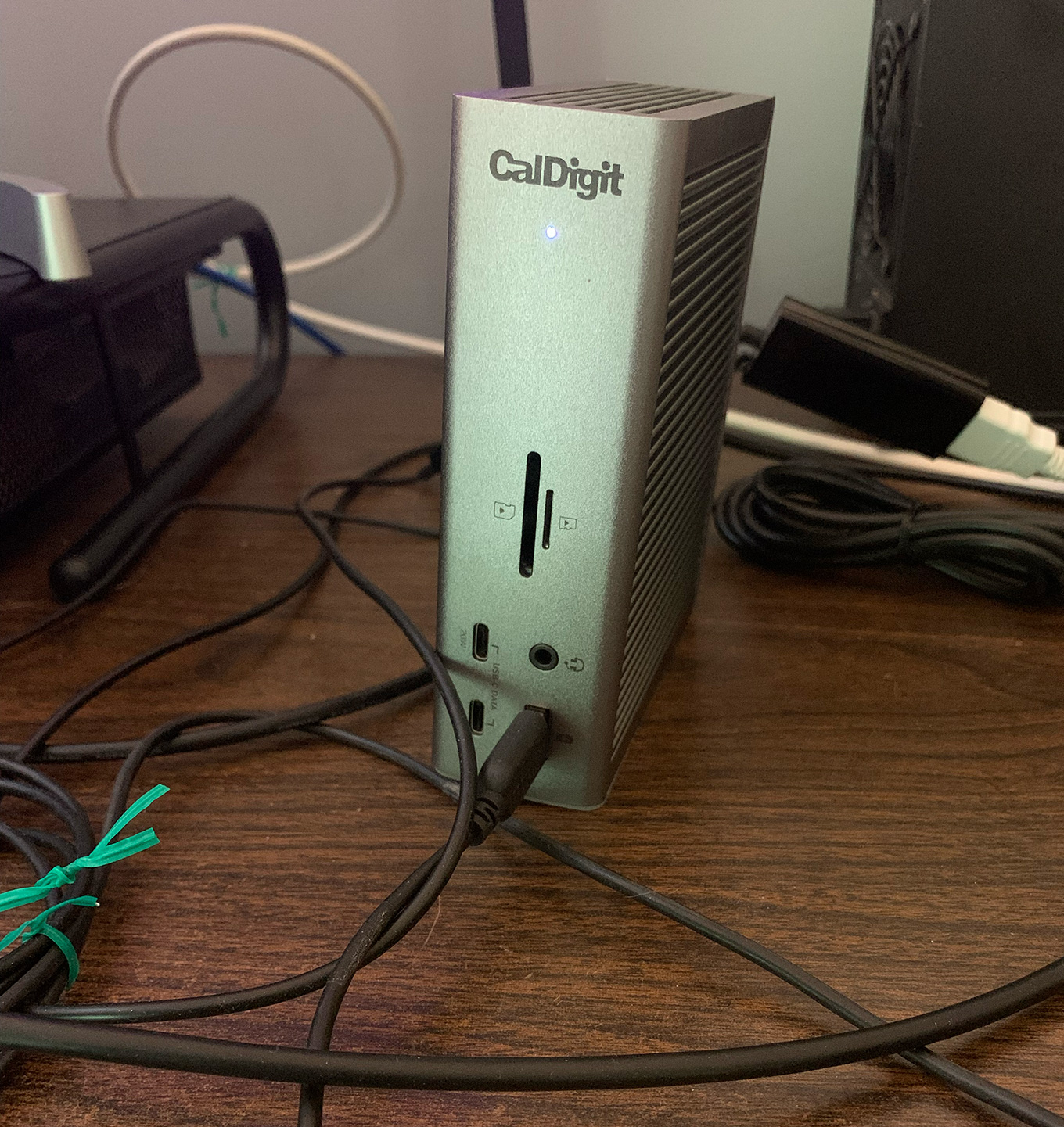 However, while the dock works instantly, that doesn’t mean your peripherals will. Here are some of the configuration issues I ran into:

NOTE: I wrote about my experiences adding 10G Ethernet to my office here.

There may be others. The issue, I think, is how Thunderbolt wakes from sleep. Once the computer is awake and everything is connected, I’ve never had an issue where the TS4 or any unit attached to it goes offline. It’s just that transition from sleep to wake that’s tricky.

NOTE: Even after updating the CamLink 4K firmware, I still see glitches in the video signal every few seconds when it is connected to the TS4. For now, the video connection is more stable when connecting the CamLink directly to the Mac.

WHAT I CURRENTLY HAVE CONNECTED 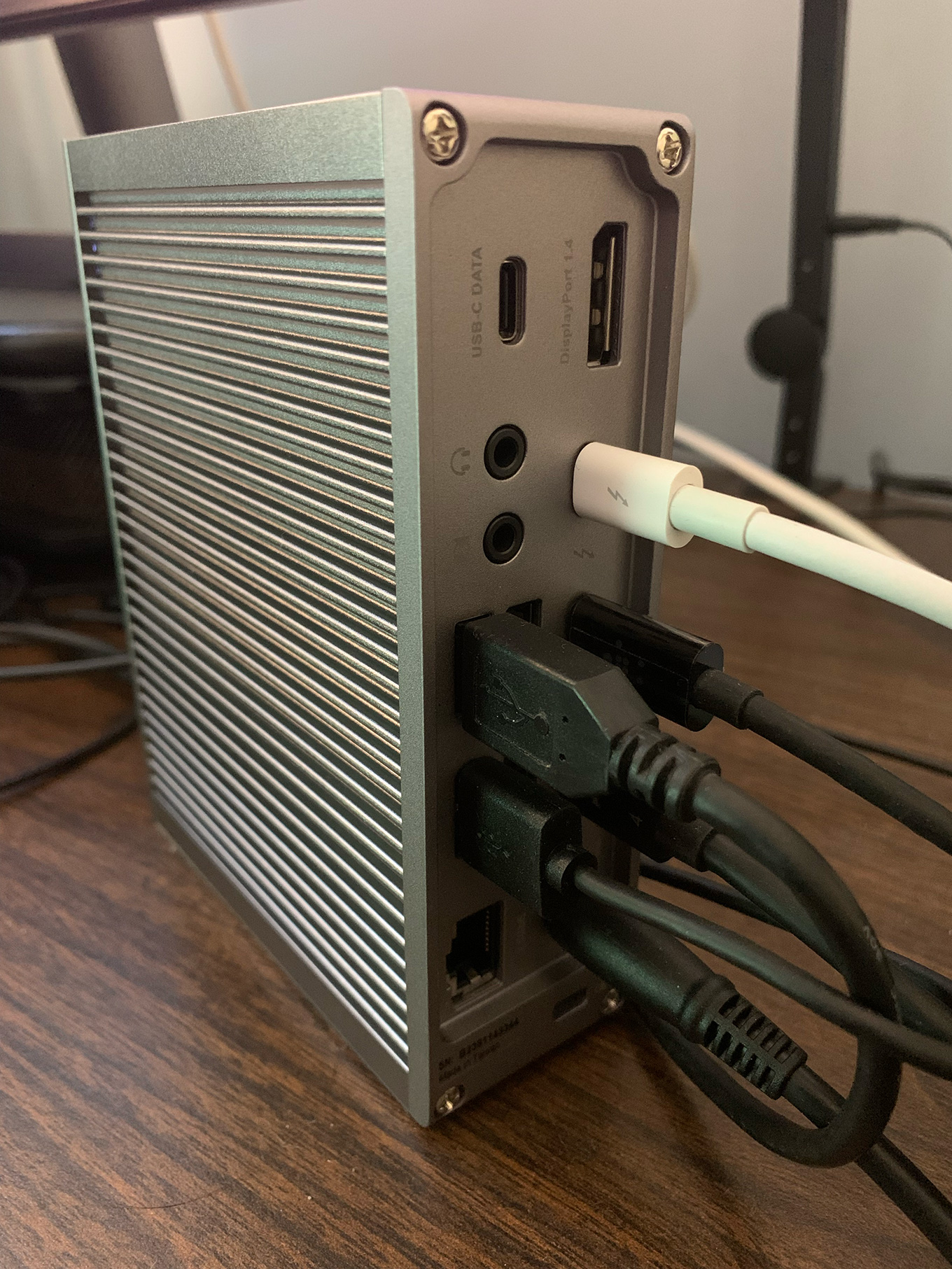 NOTE: Yeah, the back of that dock is a mess. But you don’t buy a dock just for its looks.

As I write this, I have the following gear connected to the dock, which attaches to the computer via single Thunderbolt 4 cable (supplied by CalDigit):

This leaves one USB-A and two USB-C ports on the front of the unit available for testing other products.

Since the Mac gets power from the TS4, I theoretically only need that one Thunderbolt cable connected to my Mac. However, I did two live Zoom presentations yesterday to dozens of people For my own peace of mind, I moved the Ethernet and CamLink connections back to the Mac.

What I didn’t expect was how much faster ports on the TS4 are compared to the MacBook Pro with an M1 Pro CPU.) I ran three speed tests on each port, then averaged the results. 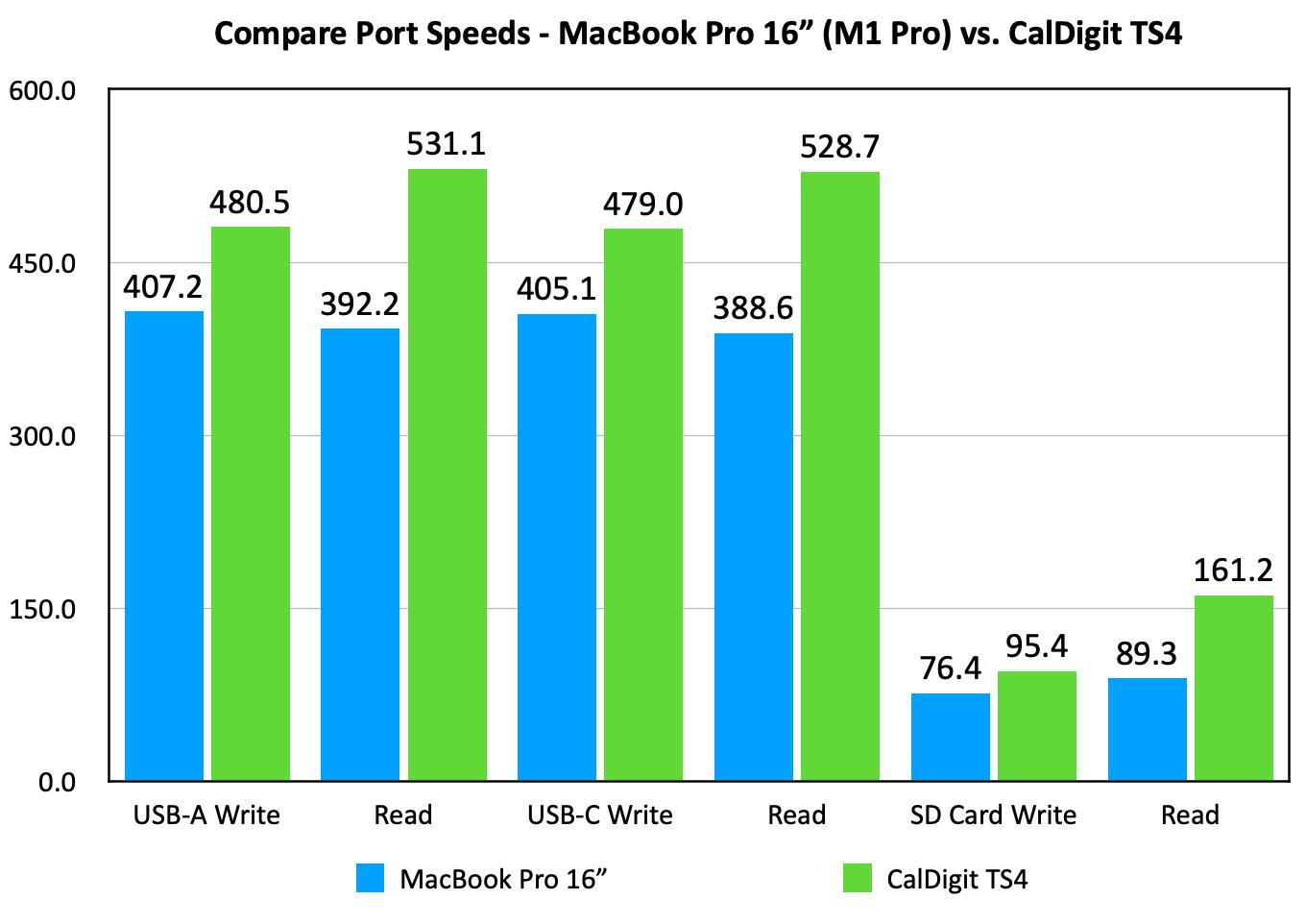 Summarizing the results, the TS4 is faster on every port:

This was a speed improvement I was not expecting!

For some strange reason, the TS4 is markedly faster accessing the web. I have no idea why. 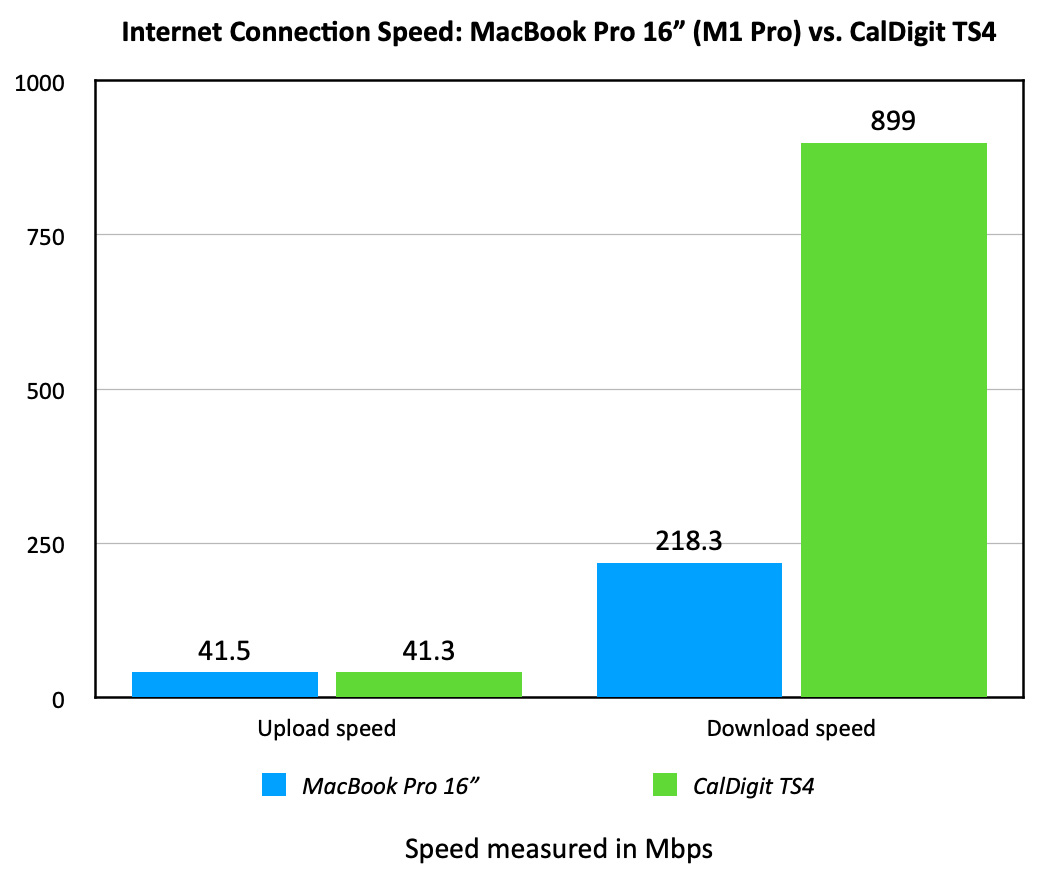 Summarizing these results, the TS 4 is essentially the same for upload speeds, but over 300% faster for downloads!

BIG NOTE: I just ran this test again – using SpeedTest.net – and the Mac clocked in a 735 Mbps. Faster, but not as fast as the TS4.

I don’t know why the MacBook Pro is slower.

My server is a Synology DS1517+, with five drives inside. When connected to my Mac using 1 Gb Ethernet, I get transfer speeds around 115 MB/second when transferring large files. Transfer speeds for smaller files are much slower due to how Ethernet packets are constructed.

When connected to the TS4 using 2.5 Gb Ethernet, with server settings optimized by Synology support, I get the following speeds:

Synology support tells me that these speeds are what they would expect. The speed limitations are at the server, not the TS4.

THOUGHTS ON THE NETWORK

As you can imagine, losing connection to the network during sleep is, ah, concerning. There are three work-arounds as CalDigit works to release a firmware fix:

For now, except for those times where I need really fast access to the server, I just moved my Ethernet and CamLink connections back to the computer.

NOTE: Ethernet is an amazingly robust technology. As long as you move quickly, you can disconnect the Ethernet cable from your computer and plug it into the TS4 without losing any network or server connections even if your computer is active. This means that when I need speed, I can switch my cable from one to the other without risking data loss. (Yeah, OK, if you dawdle while moving the cable you’ll have problems. But a 5-10 second break won’t hurt anything.) 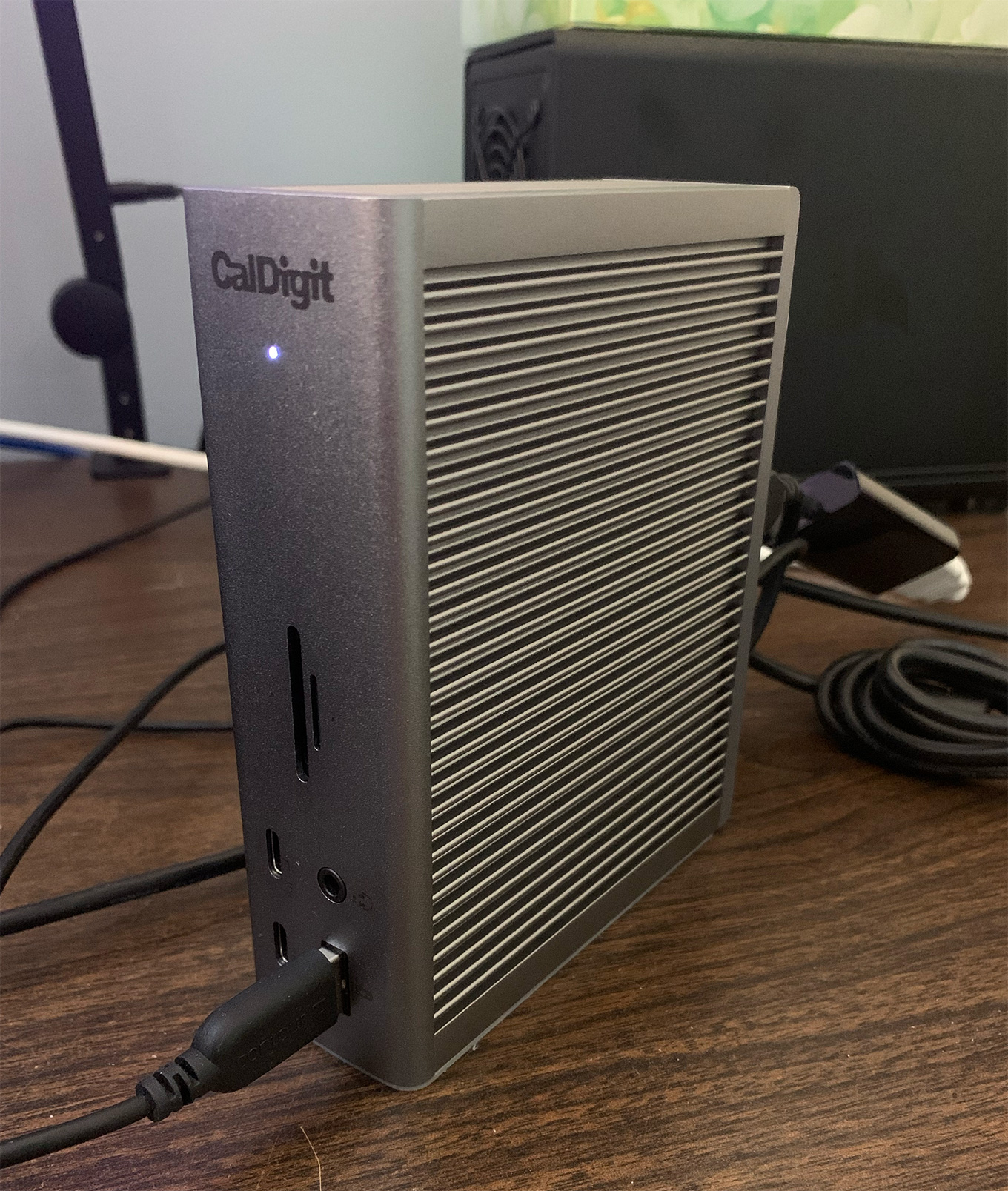 As I was testing this unit, I found the loss of connectivity during sleep distressing; though that should be fixed with a firmware update in the near future. However, short term, that’s easily fixed by switching the Ethernet cable to the Mac.

Reconnecting the TS4 is as easy as unplugging its Thunderbolt cable, waiting ten seconds then plugging it back in.

I really like this unit. It is silent. It is small. It doesn’t generate any heat. And it connects to just about everything. Yes, I wish it had an HDMI port, because those monitors are much more common than DisplayPort. But converters are available and my monitor was entirely stable for the last several days when connected to the TS4. Plus, it always woke up with the computer.

CalDigit loaned me a unit so I could review it. Now, I need to call them and buy it. The CalDigit TS4: more ports and more speed in one small box with a great price.

This table shows the results of my speed tests between the MacBook Pro and TS4. The directions (left, front, back) refer to the port I was plugged into. I wanted to see if changing port locations changed speed. It didn’t. 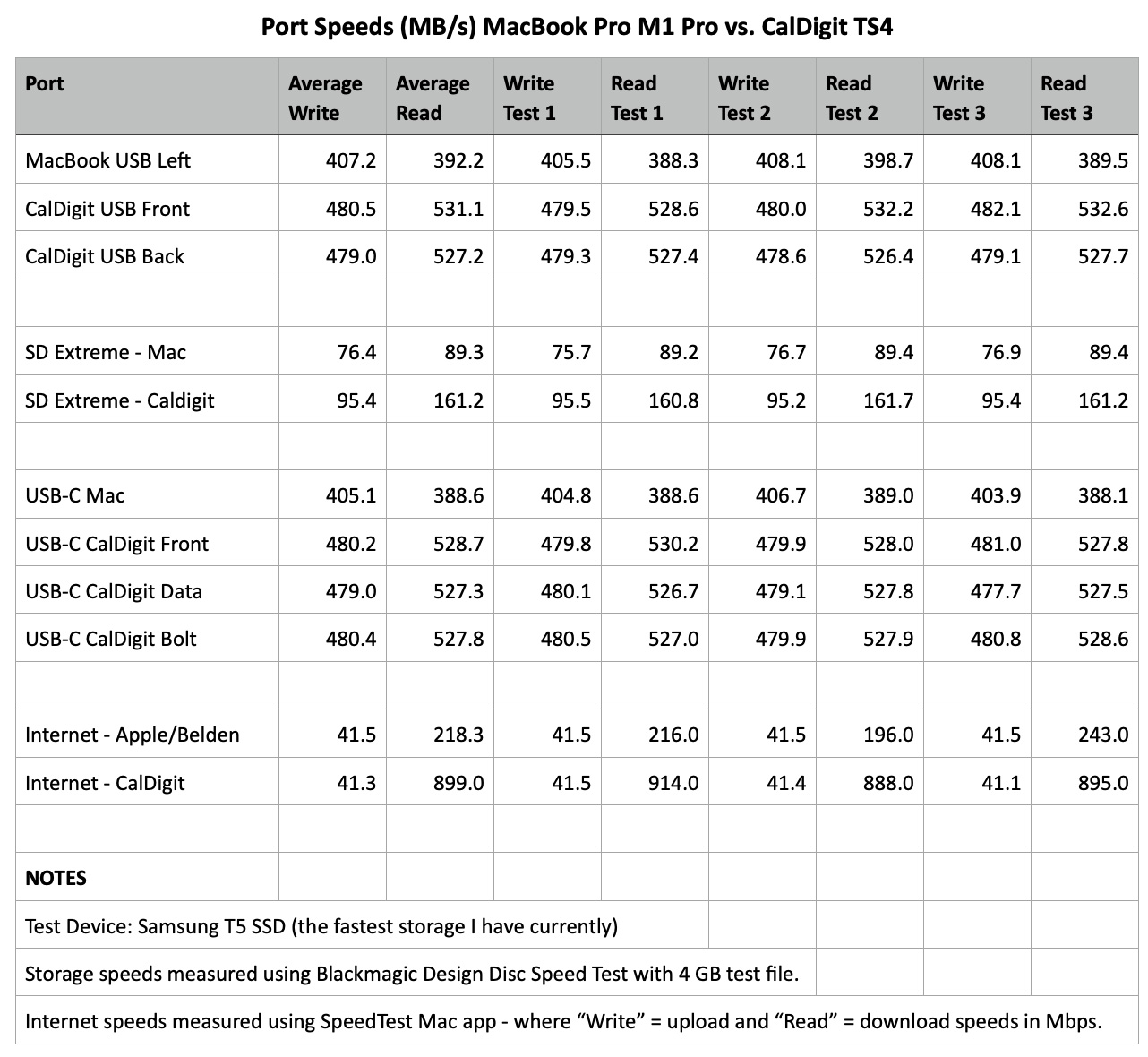