[ Updated June 15, 2021, with new measurements showing that the mic audio leaks through, even when the mute button is pressed. ]

Here’s the challenge: I create a lot of webinars and audio narration. However, every so often I need to cough. So, I need a mic switch that mutes the mic temporarily without putting a pop into the audio. This last requirement – no pop – is what makes this a challenge.

Almost all audio mixers have a mute button – but, I’m only using one mic and don’t need or want to add a mixer simply to mute my mic.

The search for a good mic mute switch has taken years; almost all switches put a pop in the audio. However, I think I’ve finally found the unit that will make me stop looking: ProCo’s Power Mute CDPM – a virtually silent mic mute switch.

DISCLOSURE NOTE: This is a unit that I purchased from MusiciansFriend.com because I expect to use it in my own studio. 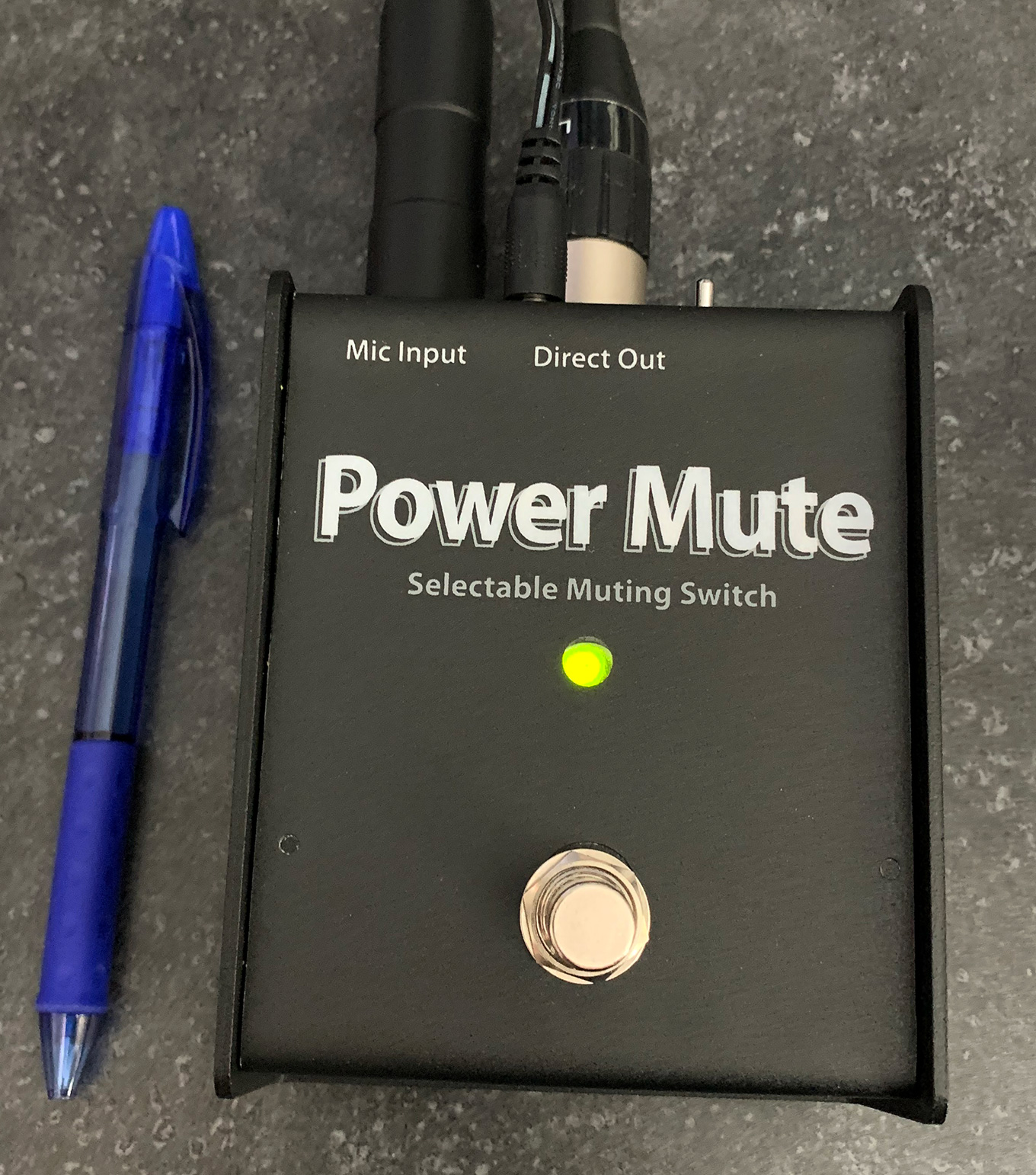 The Power Mute CDPM, from ProCo Sound, feels solid with a foot switch designed to be stepped on repeatedly. Built out of steel and painted matte black, its four rubber feet keep it in position.

This unit connects between a microphone and a pre-amp and temporarily blocks the mic signal so that coughs or other unwanted noises don’t get recorded. It has four modes, controlled by a DIP switch located in the battery compartment:

Powered from a small wall-wart (with a four foot cord) or 9 volt battery, the unit also has an on-off switch (to preserve battery life), a microphone XLR connection, and an XLR direct out to connect it to a mixer, recording device, or preamp.

This unit is designed for professional, low-impedance microphones (using XLR connectors), rather than mics that use 1/8″ mini-plugs. It supports both dynamic and condenser mics. (Condenser mics require phantom power.)

In addition to the solidity of its construction, switching a mic on and off is really, really quiet. Not dead quiet, but pretty close. The Power Mute CPDM has exactly one function: to silently mute and unmute a microphone. It does it well.

UPDATE: However, I just discovered that when the mute button is pressed, the mic audio still leaks through. Not loud, but you need to know about this. See the update below. 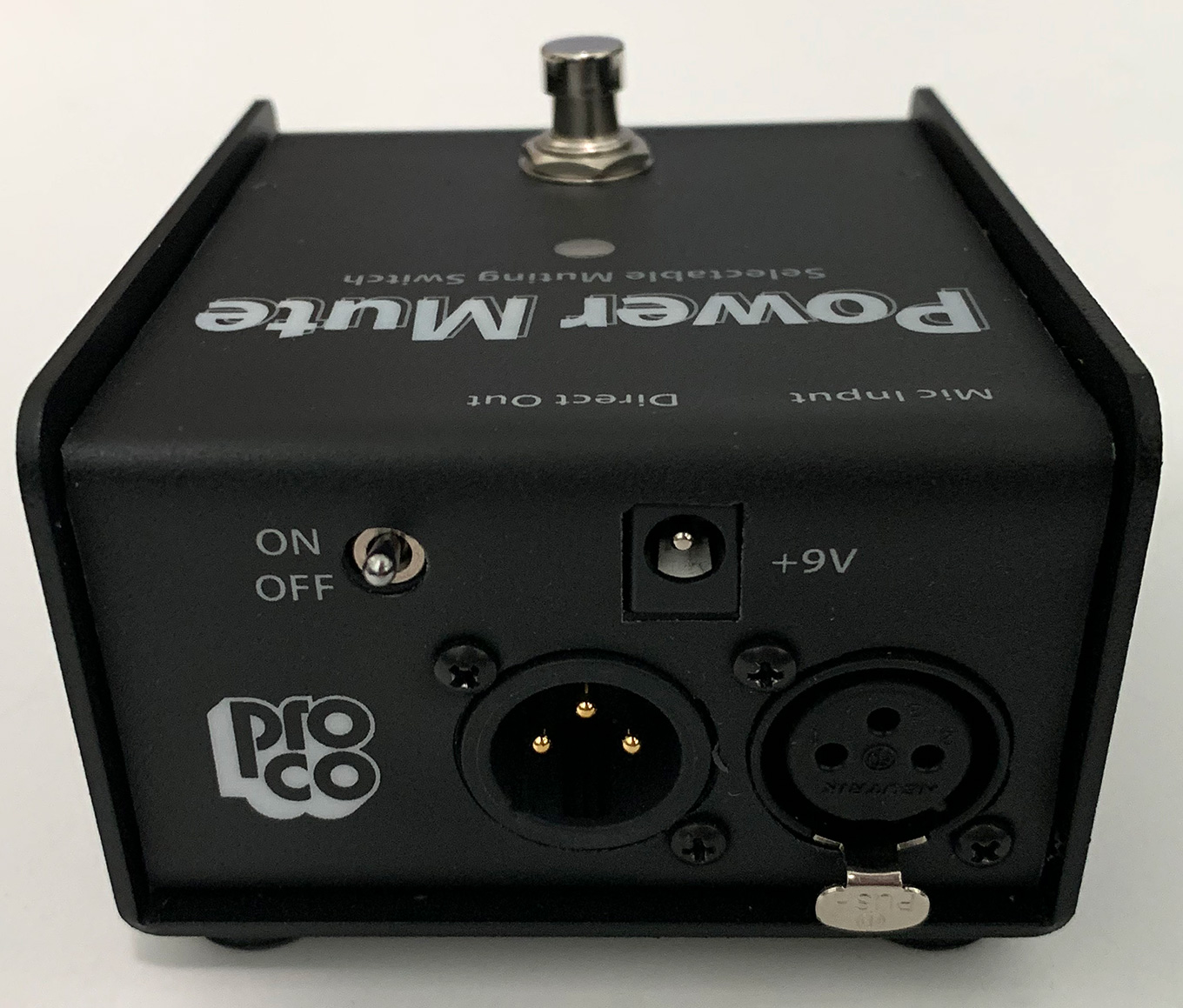 “The ProCo Model CDPM ‘Power Mute’ Selectable Microphone Muting Switch is an active microphone signal muting device that offers clean reliable performance with any balanced or floating low-impedance (150 ohm nominal) microphone or signal source. The Power Mute may be set to operate as a momentary press-to-mute, momentary press-to-talk, or latching (mic on/mic off) microphone muting switch. The Power Mute is ideally suited for use in broadcast, disc jockey, sports announcing, boardroom, and live entertainment applications when the need to mute a microphone output is required. 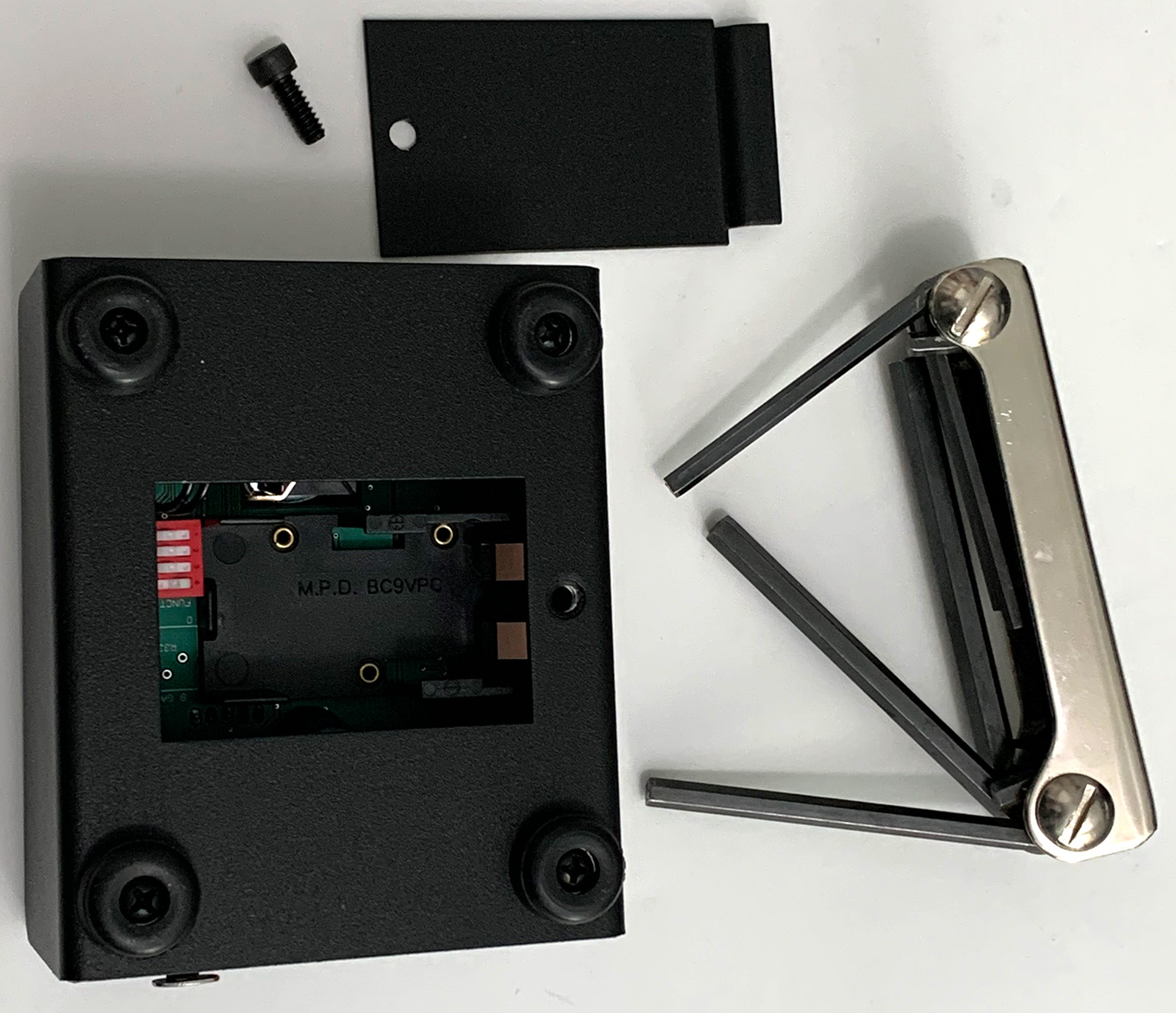 The only tricky part – and, if you read the instructions it isn’t that hard – is setting the dip switches. To do this, you need an Allen key (also called a “hex key”)  to remove the bolt from the door on the bottom of the unit.

NOTE: This bay also holds a 9 volt battery so you can use this in the field without requiring additional AC power. The power is NOT going to the mic, it is powering the electronics in this unit.

NOTE: Here are the other dip switch options. 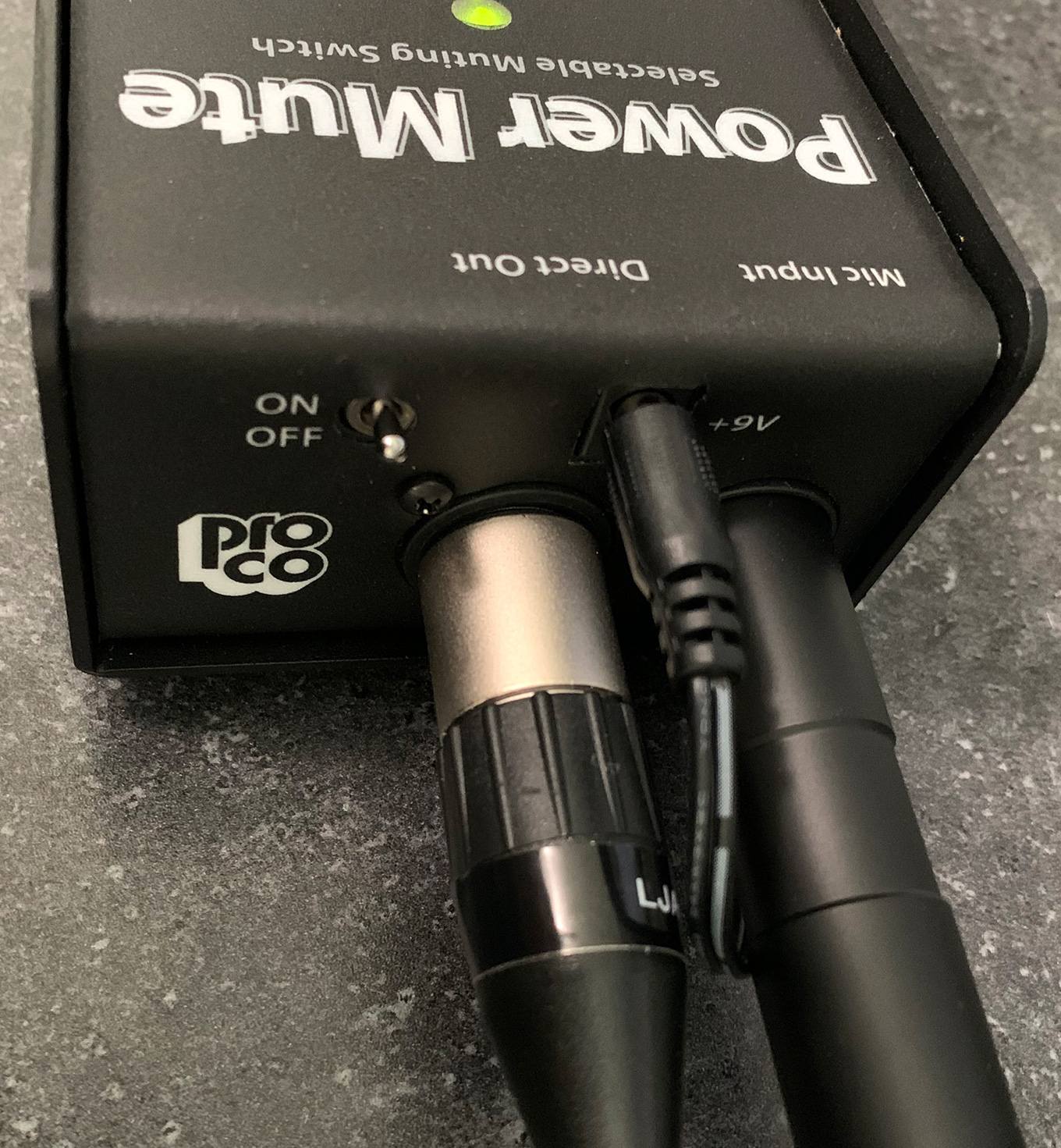 Then, connect microphones and power and turn the power switch on. Power is indicated by the green light on the front/top of the unit.

Setup is complete. Throw it on the floor and step on it as necessary. (Which is something you just can’t say about most computers or mobile devices…)

IS IT QUIET? YES.

Operating this unit could not be easier: step on the switch when you want to mute the mic. Let your foot up when you don’t.

But, the bigger question is: Is the switch silent? I had an earlier Whirlwind mute switch that was designed for dynamic mics (those that don’t require phantom power). While it was well built, every time I pushed the switch it put a really LOUD pop in the audio.

NOTE: Here’s the link to my unhappy review of the Whirlwind Micmute PMD.

So, the first thing I did, after getting everything connected was test the system.

My system, with no mic connected, has a noise floor around -70 dB – perfectly fine for the narration work that I do.

NOTE: These measurements were made using Adobe Audition 2021.

When the Power Mute is connected and powered up using the AC adapter, the noise floor rises to -54 dB. To put this level into perspective, imagine a 0 dB tone. 0 dB equals an audio level at 100%. A noise floor of -54 dB takes that 100% level and reduces it to 0.2%. So, yes, it’s not dead silent, but, no, I’m not bothered by this amount of background noise.

The instructions say that if your mic or device is provided AC power set the Ground / Lift dip switch to Lift. I measured both settings for my mic and, while there isn’t much difference between the two, Lift is slightly better (which is illustrated in the dip switch settings above. So I recommend using that. 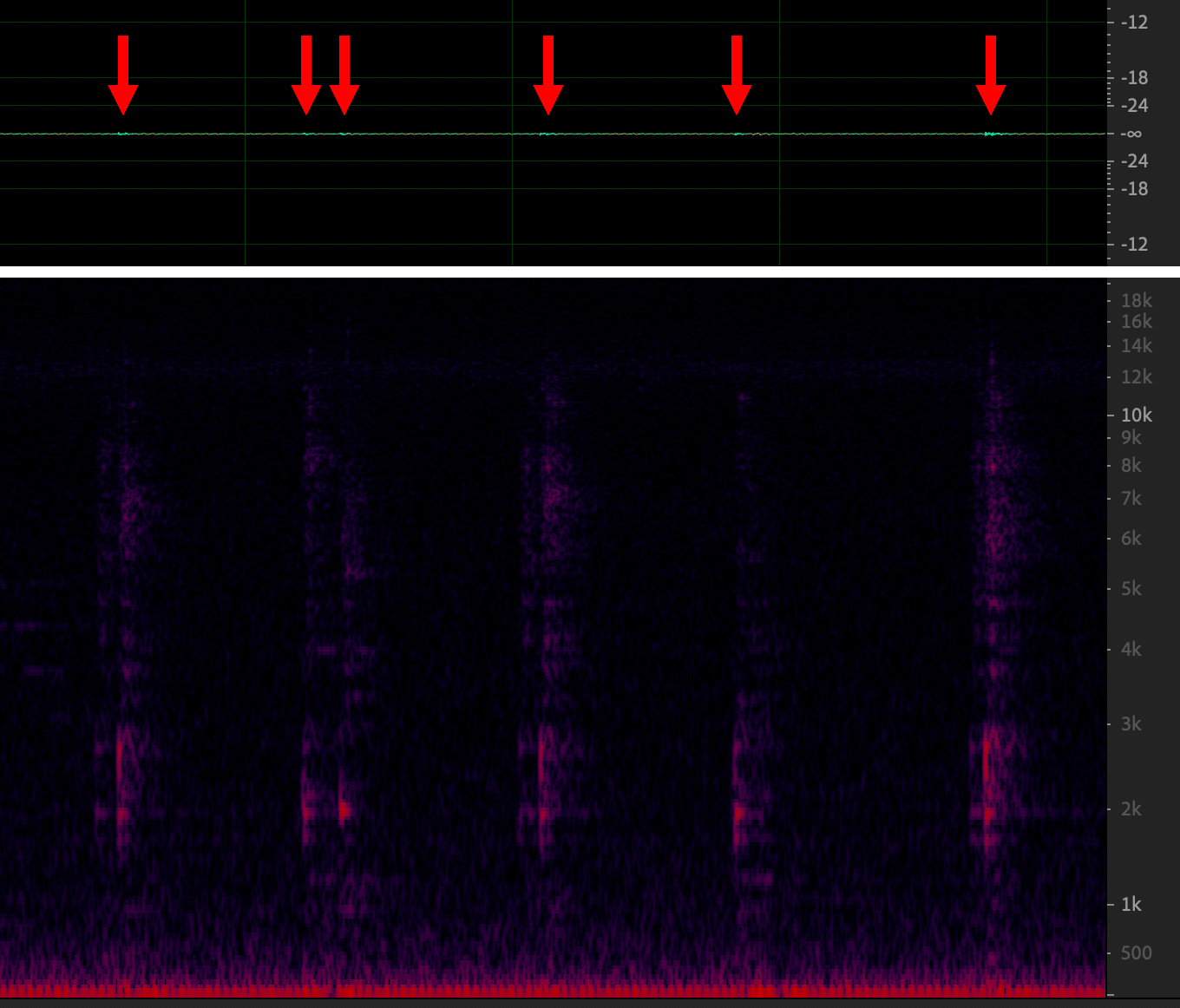 (The amount of noise generated when pressing the Mute button – some, but VERY little.)

Below the waveform, in the frequency display, you can see the spikes caused by pressing the switch. But, again, while they are there, they are not very loud, especially when compared to the Whirlwind unit which is not optimized for condenser mics.

Today, I was testing the unit prior to my first live use tomorrow and discovered something disquieting: mic audio leaks through the switch, even with the button pressed. To my mind, mic audio should be completely silent. 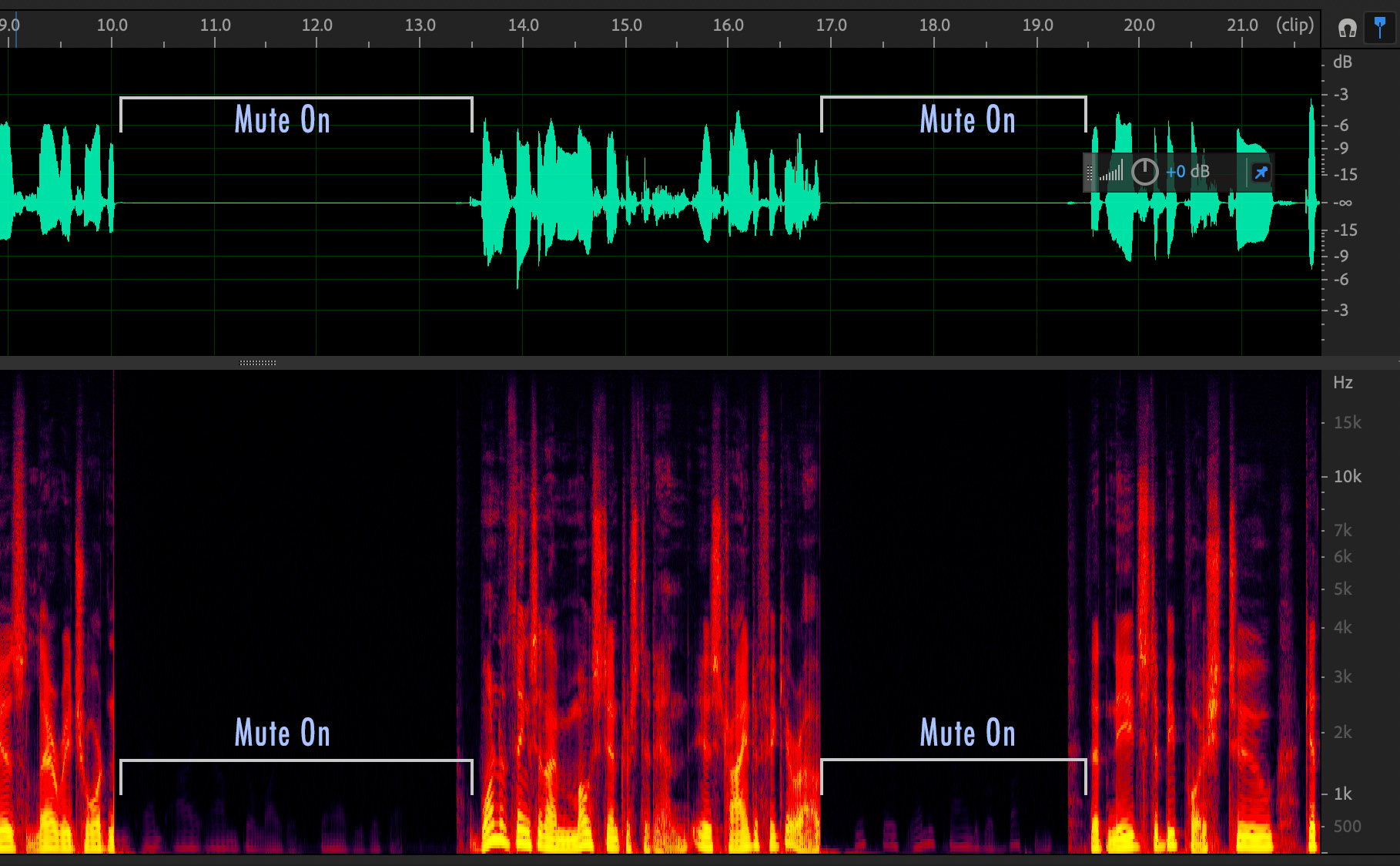 As the screen shot above illustrates, I have a mic connected and I’m talking. Pressing the switch silently mutes the mic. Audio levels drop to -70 dB to the noise floor discussed earlier. BUT, when I talk with the mute button pressed, audio levels leak through adding about 12 dB of gain. It seems to me the mic should be totally muted, not “mostly” muted.

When I talk with the mute button pressed, audio levels rise to around – 50 dB. You can see my voice frequencies, the red “bumps” in the frequency analysis above. I was very surprised to see that the muting is not truly silent. Muted audio could be recovered if you worked at it. I’ve contacted ProCo support and will update this review if I hear back from them. 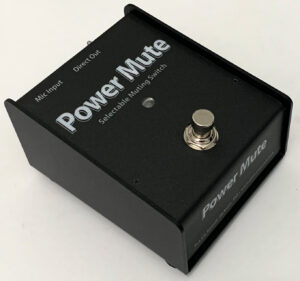 The ProCo Power Mute CPMD mic switch is a ruggedly-built, easy to use and reasonably quiet mic mute, well-suited for live events or recording. Of the four mic switches I’ve tested, this is the most flexible, quietest and easiest to use.

I am concerned, though, about mic audio leaking through when the mute button is pressed.

Still, this is the best mic mute I’ve discovered so far. I can’t wait to start stepping all over it.