How to Pick the Right Apple Silicon System

With the release of the M1 and (rumored) M2 families of SoC (System on a Chip) chips from Apple, the rules changed when comparing hardware configurations when buying a new Mac.

This was made clear by a question Jerry Thompson asked recently:

“I’m wondering if you can shed a little light on the new terminology Apple is using to rate their newest SOC products. I can’t quite grasp how to understand the difference between the way they have listed options for GPU for the current Intel Mac Pro in GB vs the new “core ratings?

“Should we think of 64 GB of Graphics Memory as 64 Cores of Graphics Memory? And what exactly is “Neural Engine”? Does this spec have anything to do with processing power for Editors, Colorists, Compositors, Sound Designers, Compressionists, etc…?”

This is a great question. Here are some answers. 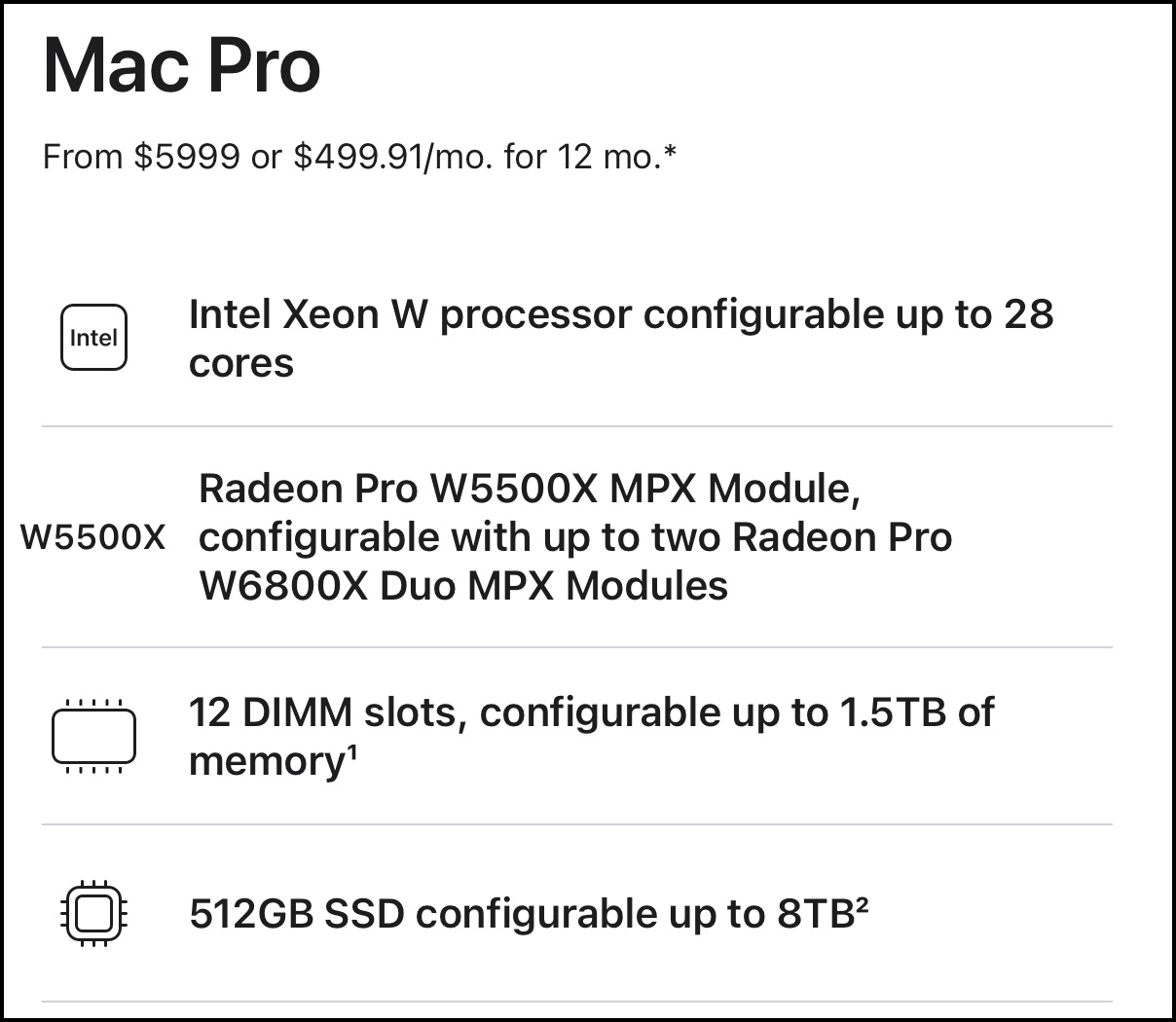 In the past, when Apple discussed the specs of its Intel-based computers, it would refer to parts from different vendors: Intel for the CPU, AMD for the GPU, and any number of different RAM suppliers. While all these companies make excellent, reputable products, the challenge lies in integrating them.

In the screen shot above  from the current Mac Pro, you can see this descriptive division. However, to make sense of it, you need to delve into the tech specifics of each part by visiting the AMD, or Intel, or Samsung websites. Or study test data. It is confusing at best. And unfathomable at worst.

NOTE: GPU memory is relevant to AMD GPUs because they need separate memory from the CPU to do their work. The more memory they have, the faster they can work. 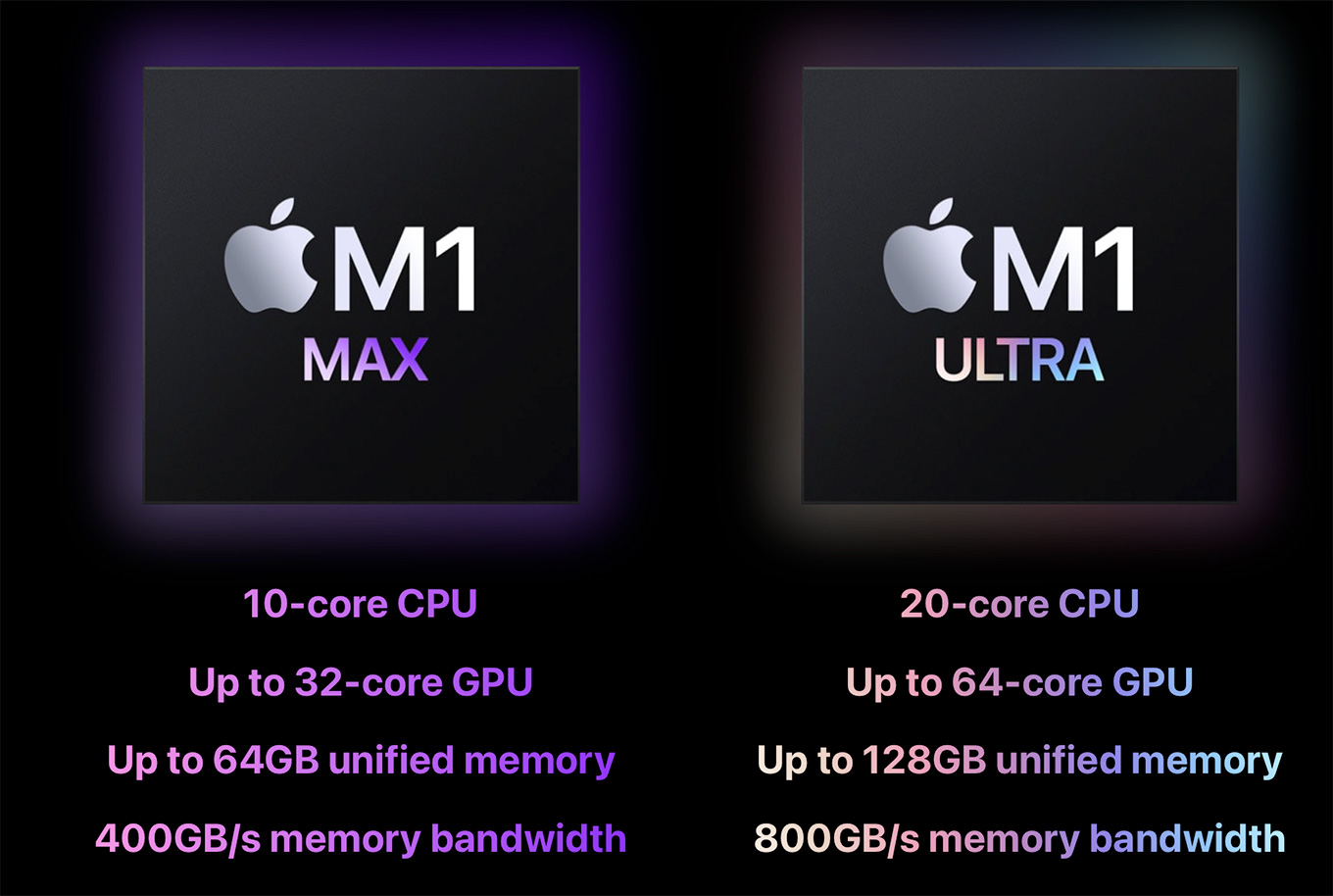 With the M-series of SoC chips, Apple now describes the components in more approachable detail.

At the heart of any Apple silicon chip is a pool of shared memory. Rather than copying data from a memory pool used by the CPU to one used by the GPU, all parts of an Apple silicon chip access data in the same memory pool. No duplication means less memory is required and less time is spent copying data. As well, because memory is on the same chip as the CPU and GPU, processing speed is greatly enhanced.

We no longer need to specify how much memory is used by the GPU or CPU – they all access the same memory at the same time. This reduces the total amount of memory needed by the system as well as making everything run faster.

NOTE: Video editing software is designed to use 32 to 64 GB of RAM. You can buy more, but your editing system won’t run any faster.

A core, whether in the CPU or GPU, is, essentially, a processor. The more processors, the faster the SoC can do things. So, in theory, a 20-core CPU (a CPU containing 20 processors devoted to CPU tasks) is faster than a 10-core CPU. CPUs are used for tasks like text processing, moving objects, drawing windows and running apps.

As well, in theory, a 64-core GPU will process pixels faster than a 32-core GPU. GPUs are used whenever you need to change the look of a pixel. For example, color grading, rendering, exporting, and keying.

A shorthand way of thinking about the difference between the CPU and GPU is that CPUs move objects, while GPUs change pixels.

The Neural Engine is a section of the clip devoted to artificial intelligence, both in learning and applying the results. We never had a neural engine with Intel chips, which are CPU-only.

AI is – for good and ill – becoming increasingly important in image processing and, albeit more slowly, video editing. The neural engine provides an on-board system for handling AI-based tasks.

For example, according to Konsyse.com (link), the neural engine enables:

For now, any version of the neural engine will be fine for video editing, which doesn’t rely on it as much as image processing software. Also, because it is new, developers are still learning the best ways to work with it.

The challenge with this new hardware, however, is that Apple is upgrading its hardware faster than developers can take advantage of it. Recently, I ran a test to see how different programs utilized this new architecture. And, in short, none of them were fully using all the cores in either the CPU or GPU.

This means that even if you bought the absolute top of the line system, most software won’t take full advantage of it. I’m sure this will change over time, as developers rework their software to take advantage of this new power. This is especially true for Mac-only software that doesn’t need to worry about maintaining compatibility with Windows systems.

SO, HOW TO DECIDE?

So, the more money you spend, the faster the chip runs. However, virtually all video editing software doesn’t currently take full advantage of a maxed out-chip. So, while you can spend more money, you probably won’t get the full benefit.

Does this mean that faster chips are not worth buying? No. Faster chips will be faster. But, if their price seems unaffordable, you will still get amazing performance for even complex editing tasks with a “slower” Apple silicon SoC.

These articles may help you spec your next system.

2 Responses to How to Pick the Right Apple Silicon System