While Apple Final Cut Pro X provides the ability to create captions manually, much more often captions are created outside of Final Cut, then imported.

NOTE: If you are interested in how the captions for this example were created, here’s a review of Simon Says – On-Prem that creates captions for Premiere and Final Cut from audio files.

In this tutorial, I’ll show how to import, adjust, move and export captions.

NOTE: Here’s a complete workflow illustrating how to import, adjust, and export SRT captions using Final Cut, then import them into YouTube.

The caption file was saved in XML format, which is a text file that you could read in Text Edit, though it looks pretty intimidating…!

NOTE: Even though it contains captions, the file format is XML, which is why you use this menu option, rather than Import > Captions.

If you’ve already imported captions, or, like me, are doing this more than once for the same project, you’ll see this dialog. 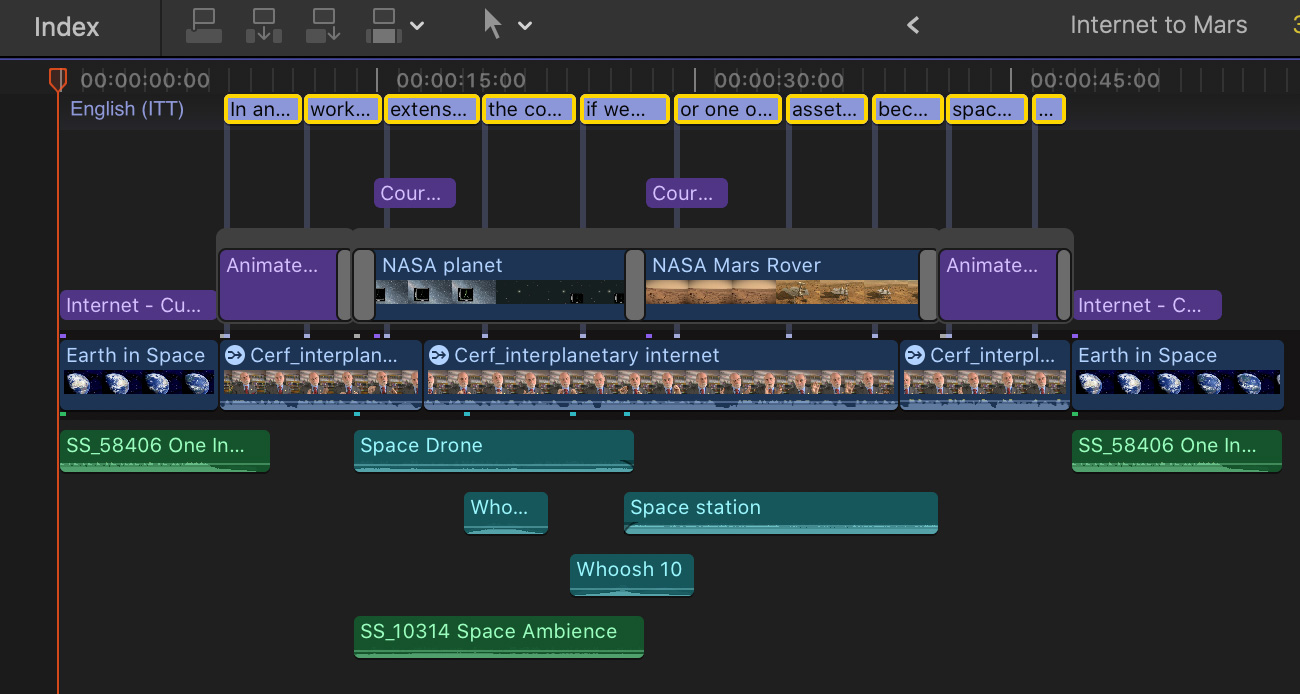 If the project that provided the source files for captioning is in the currently open library in Final Cut, captions will be imported and placed into the project automatically. (In this screen shot, I highlighted the captions in yellow so you can see where they are.) 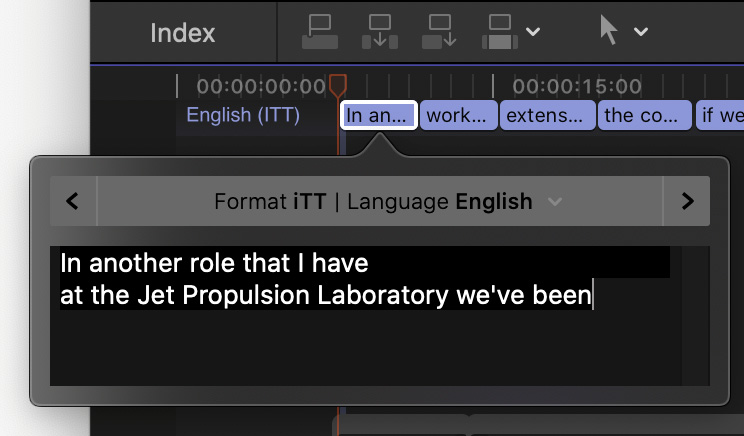 To modify a caption, double-click the caption clip to display the text. 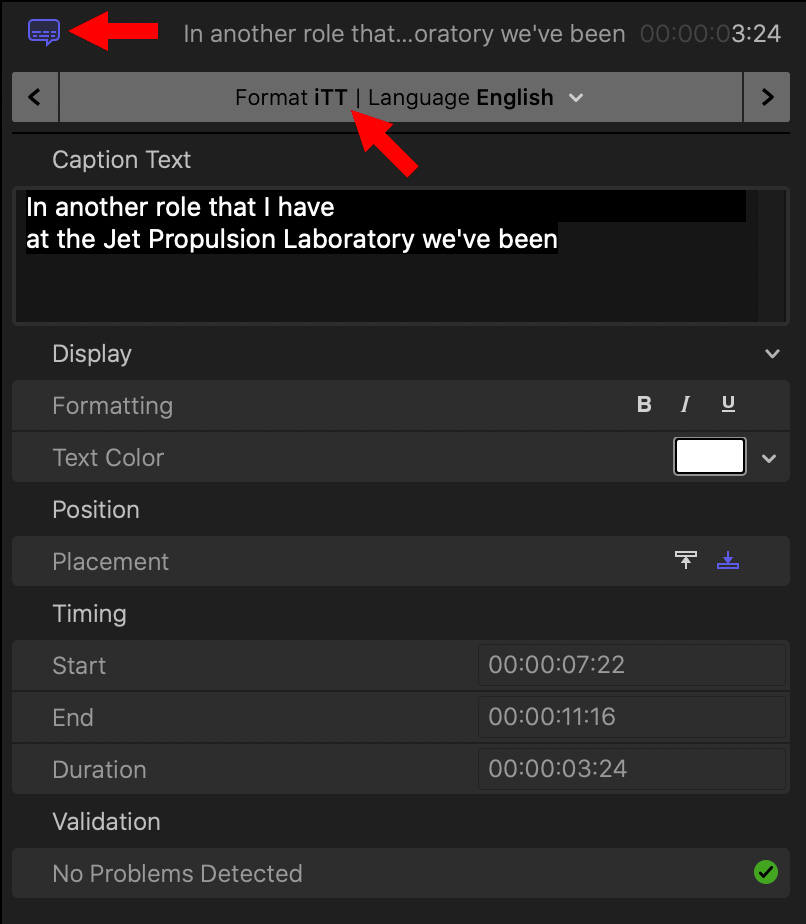 Or, depending upon the format, the Inspector will display other formatting options for a selected caption.

Which caption version you use depends upon where the file will be viewed.

To copy captions from one project to another, the timecode MUST match between both projects. (This is because captions are assigned position based upon timecode.) 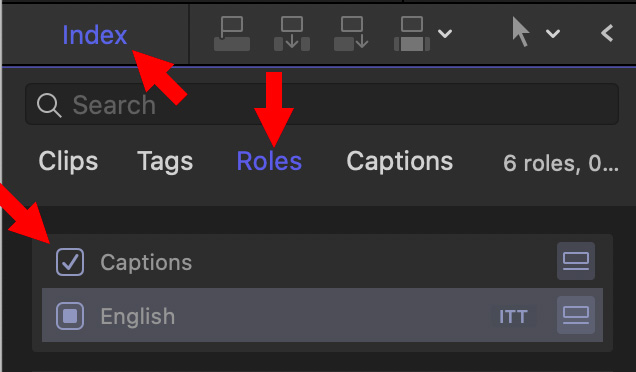 To shift captions to a new timeline position, choose one of the following:

One language of SCC captions (which Final Cut calls: CEA-608) can be embedded into the video itself.

One language of any caption can be burned into the video.

NOTE: Burned-in captions are a permanent part of the video, they can not be turned off later. By default, captions are not burned-in.

All other caption formats, including multiple languages in CEA-608, must be exported as separate files, called “sidecar files.”

To burn-in captions into an exported file: 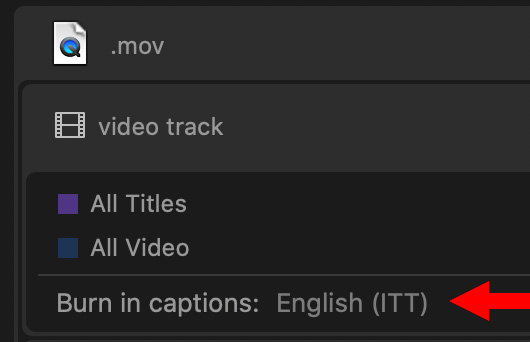 NOTE: If you change your mind prior to export, click the Captions button and change the Burned-in option to None. If you decide you don’t want burned in captions after export, you’ll need to export a new file.

To export a caption sidecar file:

There are two options in the Timing menu:

If you haven’t changed the default starting timecode (which is 0:00:00:00) choose Relative, which is the default.

The bottom of this window shows that there will now be two files exported, rather than the original one.

A NOTE ABOUT SRT CAPTIONS

If you’re exporting SRT captions, select or deselect the Include Formatting checkbox in the SRT section to retain or remove any text formatting applied to the captions in Final Cut Pro.

In most cases, it’s recommended that you deselect this option to remove text formatting. Because of the absence of text formatting specifications in the SRT standard, any formatting style (such as bold, italic, or underline) that you apply to SRT captions in Final Cut Pro may not appear correctly in your intended player or playback device.

Importing and exporting captions is straight-forward. The hard part is creating the captions in the first place, then taking the time to make sure they are accurate in terms of spelling and timing.