[ Update: On March 19, 2019, Apple released updates to both 21.5″ and 27″ iMacs. These new systems feature improved CPU and GPU options, though the display and storage remain the same as earlier versions. I’ve reflected these new options in my recommendations below. ]

At their WWDC, in June, 2017, Apple announced and released new iMac computers, designed to meet the needs of professionals. These new systems sport a variety of very exciting features. However, if you are on a budget, how do you determine where to spend your money?

This article is designed to help you make more informed choices when you don’t have a lot of money to spend.

NOTE: I have not purchased any of these systems. My recommendations are based on past experience, current system specs and talking with informed individuals.

If money is no object, buy the top of the line iMac. It will work great and you’ll have bragging rights over all the other systems.

But, if money IS an object, then you need to make trade-offs, balancing the performance you need with the money you have. However, you don’t need to spend a fortune to get a system today that can meet your editing needs for the next several years.

ALSO: Here are two other configuration articles you may find useful:

YES, BUT WHAT ABOUT THE IMAC PRO? 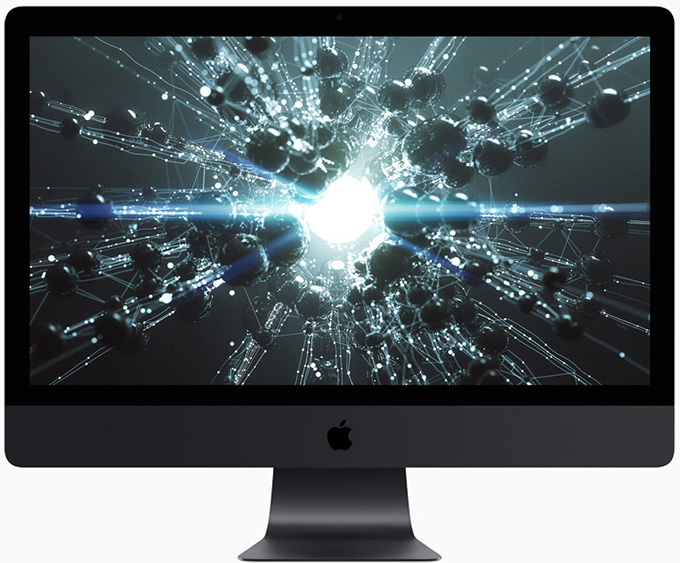 Holy smokes! What a system.

This review covers the iMac. Click here to read about the iMac Pro.

YES, BUT WHAT ABOUT THE MAC PRO?

Given the latest iMac releases, there are very, very few reasons to purchase a Mac Pro right now; especially given its price. Keep in mind, however, that Apple has already announced they are working on a new, top-of-the-line Mac Pro which will ship sometime in 2019.

Given what Apple has announced for the iMac Pro, however, that upcoming Mac Pro will need to be a true screamer to compete. I’m looking forward to seeing what Apple creates – but, as I mentioned earlier, I still need to pay my bills today.

And that leads us directly to the latest updates to the iMac. 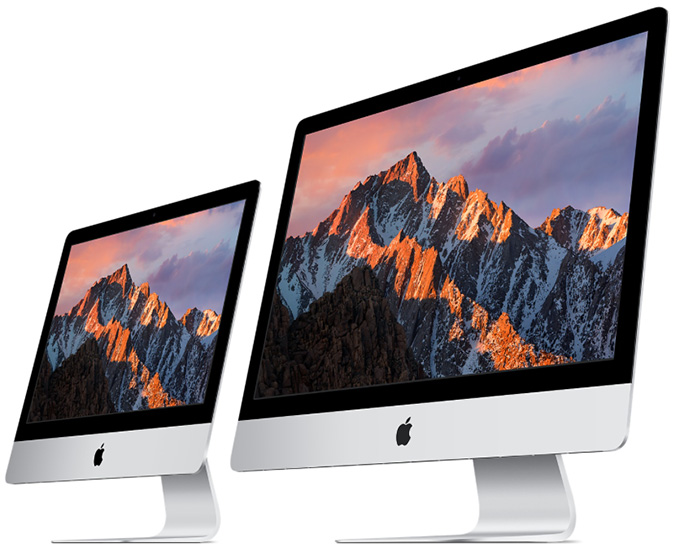 Both Final Cut Pro X and Premiere interfaces work best on larger screens. This is not to say they work poorly on smaller screens, but both of these display a LOT of elements on screen. More screen room is MUCH better.

I recommend a 27″ display. Plus, all the new 27″ iMacs now share the same 5K Retina Display.

NOTE: One of my iMacs is an older 5K iMac. I’ve discovered, that while seeing a 5K image is nice, the on-screen text is often very hard to read. So I’ve lowered the screen resolution using System Preferences to make the text larger. I prefer to easily read the text to seeing every pixel in my image.

However, if the purpose of the new system is video compression, you don’t need the bigger screen size. In which case, you can save money and improve performance with a 21″ system.

NOTE: Both H.264 and the up-coming H.265 video codecs are hardware-accelerated in all the new hardware. While this won’t help when transcoding into ProRes, hardware-acceleration will significantly speed compressing files for the web.

While CPU speed is important, it is not critical for video editing; remember, iMacs that were current as recently as last month, were easily able to edit almost all forms of SD, HD, and 4K media.

Any of the processors in any of the new iMacs will be fine for video or audio editing. 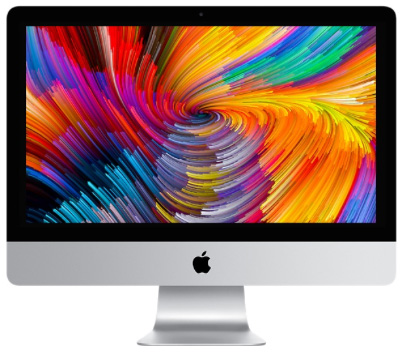 I really like that Apple has put Fusion drives into all but two of their iMacs. I own two iMacs with Fusion drives and I remain very impressed with these systems. They are an excellent balance between the speed of an SSD with the storage capacity of spinning media.

Keep in mind that the SSD portion of a Fusion drive is only a part of the total storage. For example, the 1 TB Fusion uses a 32 GB SSD, while the 2 and 3 TB Fusion drives use a 128 GB SSD. The OS watches what you do and moves files onto the SSD based upon what you are using most. Which means that a Fusion drive works fastest with files you access over and over.

NOTE: Here is an updated article on storage speeds and media requirements that explains the load your storage system needs to carry.

If you want maximum performance AND you plan to store media on an external drive, get the 512 GB SSD. All the files in macOS will take less than 30 GB, leaving plenty of room for working files and immediate storage.

If you want an excellent balance between performance, price and capacity, stay with the 1 TB Fusion drive. Again, store media externally.

If you don’t plan to purchase external storage – and you will, you just don’t know it yet – get the 3 TB Fusion drive. (An extra TB for $100 makes this a better value than the 2 TB Fusion drive.)

One of my systems has a 3 TB Fusion drive. Currently, I’m using 600 GB of it. The rest is sitting around idle. When using external storage, you really don’t need lots of internal storage.

If you just want maximum performance from your storage, get the 1 TB SSD. It’s pricey, but it’s speed will make you giggle.

Apple notes: “For the best performance, iMac systems with 32GB or more of memory should be configured with a 2TB or larger Fusion Drive or all-SSD storage.”

NOTE: Apple’s marketing materials now define a terabyte as one trillion bytes. This means that when a disk is formatted, its storage capacity will be less than 1 TB because of the differences between how marketing and engineering calculate disk sizes.

Configuring the GPU (Graphics Processing Unit) is now done when you pick the initial iMac, rather than as a build-to-order option within each iMac family. So, much though I would like to pick the mid-range system and add a high-end GPU into it, we no longer have that option.

Which is a shame. Because while we don’t need the high-end CPU system for most video editing, we would significantly benefit from the high-end 580 GPU in any system.

Both Final Cut and Premiere are increasingly using the GPU for most editing tasks, because the GPU is much faster than the CPU at rendering bitmapped images. Therefore, the best choice is the high-end GPU. The high-end GPU also includes 8 GB of video memory (VRAM).

However, the mid-range system with the Radeon Pro 575X is a perfectly adequate choice.

NOTE: The difference between the 575X and 580X is performance. The 575X has a peak performance of about 4.5 Teraflops, while the 580X supports up to 5.5 Tflops. Both will handle video just fine. All of the Radeon chips support OpenCL and Apple’s Metal and up-coming Metal 2 GPU computing API.

Here’s a link to learn more about Radeon’s GPU chips.

NOTE: Again, if you are principally doing video compression, the GPU speed is less important than the CPU speed. So, compressionists don’t need as high-performance a GPU as an editor.

UPDATE: When looking at GPU performance, use the specs for Metal or Metal II. OpenCL will not be supported going forward. Also, while eGPUs are attractive, I don’t see them, yet, as a big enough benefit for iMacs. eGPUs are principally designed for laptops.

Both Final Cut and Premiere will use as much RAM as you can afford.

Based on my tests with the 2016 MacBook Pro, I recommend a minimum of 16 GB of RAM, though, all my systems here have 32 GB. Again, if you have the money, max out the RAM. However, 32 GB of RAM will be sufficient for virtually all projects. 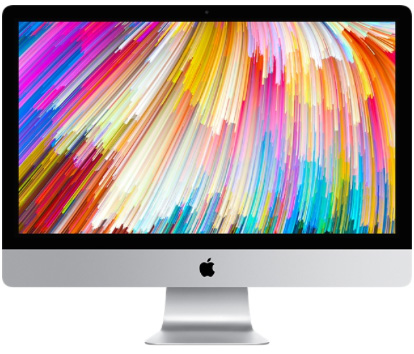 You are going to be using this computer for four years. Spend what you can afford, but don’t be stingy in areas that matter: GPU and RAM.

All the base systems are fine, But, depending upon your needs, you can tweak the configurations to better match what you want the systems to do. All systems feature wireless mice and keyboards; though, in my office, I prefer my mice and keyboards wired.

NOTE: Apple has not yet delivered the Touch Bar on any stand-alone keyboards.

If it were my money and I was doing video editing on a budget, here’s what I would get:

However, I wish that Apple made the Radeon 580X available on the mid-range unit.

If it were my money and I was doing mostly video compression, I’d get the high-end Mac mini. (This, in fact, is what I did personally.) Here’s an article that explains this in more detail.