Loren Miller warns of a problem archiving LaCie drives formatted as RAIDs. As well, at the end of Loren’s write-up, I included the text of the original note from LaCie support.

My Quest for a “Forever” RAID Box

Workflow: When one pair isn’t needed I extract the pair, label it A & B, encase them for storage on the shelf. (TIP: Container Store carries a 4X6 Photo/Craft box which just fits 3.5” bare drives! )

I’ll start a second RAID 0 pair for a new client by throwing fresh drives into the same two drive bays, stripe them as RAID 0, and when done, zip! Pull ‘em out, to the shelf, and I’m back on yet another client’s RAID pair with instant access to his or her media. I recall I’ve also returned a RAID pair to a different set of bays, such as 1-2 or 2-3— no issue. The software picks up the config.

But my “new” Mac Pro 2013 doesn’t have drive bays. And I have a growing cadre of 4K clients to serve. 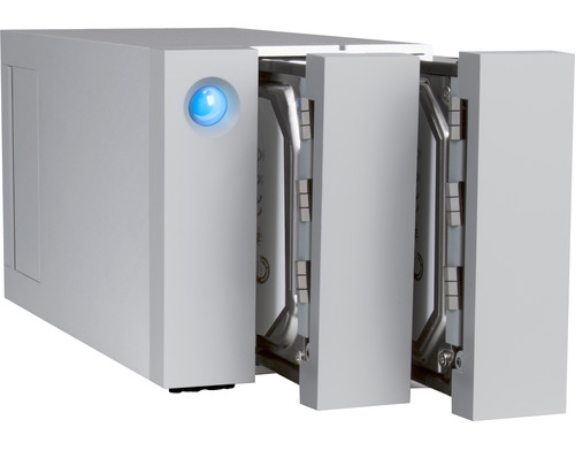 So I shopped a bit, and purchased a LaCie 2Big 8TB Thunderbolt 2 / USB 3.x RAID box from B&H with 2 drive doors, preformatted in OS X HFS Extended. I set it to RAID 0 for pure speed, plugged it into the dumdum bullet. Serves up a couple streams of 4K Pro Res 422 (HQ) just fine. I was delighted. I had a colleague buy the same 8TB box for his purposes.

Because it has doors for the pair, I fully expected I could extract each RAID 0 set when full or simply not needed, carefully label the RAID set “A & B,” put it on the storage shelf, and follow my classic RAID workflow. I call this capability an FDR- Forever Drive RAID system. I expect it would extend to SSD drives as well.

For a new client, I was about to buy a fresh pair of enterprise drives like IronWolf Pro’s – La Cie lists them as recommended.

But something told me to hold off and investigate the box first. I checked LaCie documentation. (They’ve been owned since 2014 by Seagate, decent manufacturer, almost as good as HGST, slightly higher failure rate). Nothing in the doc about pulling and re-loading a striped pair. Why was that?

I wrote in. LaCie bumped the note up to Seagate. A very polite fellow explained in so many words that If I try to reload the archived RAID set, the hardware will overwrite the original “ID code” and all the data becomes toast.

Meanwhile, the tech support suggested I back up the pair to ANOTHER 2Big 8TB and wipe the box.

I still read this advice with jaw dropped. To me, this was BDD – Brain Dead Design – I wasn’t about to compound the problem!

I had to lower my review of that product for not disclosing this omitted documentation, and wondered why the hell are there even doors on that beast?

This model of the LaCie “Big” series, (and possibly the others), for all its speed, is a dead end box. “Hot swappable” is meaningless here — the drive doors should be hot-glued shut.

Now I’m looking at Drobo and OWC products. Is Drobo the same, or is archive reloading allowed in either? OWC carries some interesting RAID configs, using “SoftRaid” software for striping. I have questions in to both vendors. If not, what brand name RAID 0 box has this simple and fundamental feature in a reliable hardware or software config? And has pair cycling been tested on it?

In a separate email, Loren continues: “Regarding my Forever Drive RAID system quest, I dug out the actual Seagate tech support explanation.”

Thank you for contacting LaCie Support. My name is Cristian and I hope, you’re having a great day, I would like to thank you for the great comments you’re doing on your product, we’re happy that the device has met your expectations of working with 4k files.

Now, we will have to inform you that the process you’re looking to do, can’t be reached with this device, we can’t just simply take the drives off, keep them on the side for when we want to recover the information, allow me to explain more.

The raid controller of your LaCie device gives an ID to the raid created with the two drives you already have configured, once you put other drives, it will create another ID and will only work with that ID, if we take the old drives from the device and put them into it, the device won’t recognize the past ID and will attempt to create another one, meaning it will delete the old information from the drives.

The process we recommend is getting another drive with the same capacity, do a backup and then reformat your LaCie device to keep using it. We do not recommend taking your drives out from the device if you don’t have at least one copy from your files anywhere else.

Please reply to this email if you require further assistance or have any other doubt. We will be happy to help you from 8:00 AM to 6:00 PM Central time, Monday – Friday. We’ve also provided our support link down below in case you would like to contact us by phone at your convenience.

Larry adds: Thanks, Loren, for this detailed write-up. As always, I’m interested in comments from other readers.