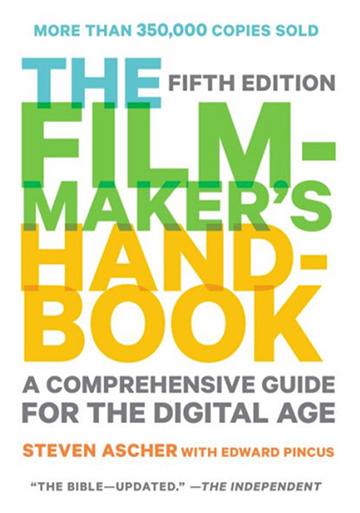 A few weeks ago, the folks at Plume (a division of Penguin Random House publishing) sent me a review copy of “The Filmmakers Handbook” (Fifth Edition) by Steven Ascher and Edward Pincus. ($35 US, available at booksellers everywhere.)

This 882-page tome sat on the corner of my desk. Sometimes, it said “Read Me.” Other times it said “When do you have enough TIME to read this?” Projects intervened while the book just sat there.

For me, the definitive work on media production is Gerald Millerson’s “The Techniques of Television Production,” which I studied in graduate school, and which has undergone multiple revisions.

In a separate event from getting this book, about two weeks ago I decided that I needed to write another book. Writing a book is very similar to filmmaking: It takes a tremendous amount of effort, not everyone will like it, and there’s a very good chance you’ll never make any money with it. One does not write a book on a whim – as Tolkien wrote: “Only need shall drive them.” As I looked at this new Handbook, I wondered why Steven felt it was necessary to write.

With thoughts of my own book swirling in my head, I picked up the Handbook to see how Steven approached a subject that is so vast – media creation – that no book could do it justice.

Shortly thereafter, I found myself 48 pages in, then skimming all over the book. Steven starts where every media production book needs to start, but rarely does: with story-telling. As he writes:

“You have a great idea for a movie, be it fiction or documentary…. How do you turn your dream of a movie into reality? There is no set route, and getting a film made involves plenty of detours, dead ends, rejections, and successes….

“Style is subjective…. Digital delivery has brought an explosion of media compared to the days when the only outlets were movie theaters and broadcast television. With digital, new forms and styles have emerged…. Then there’s the profusion of user-generated material posted to YouTube Facebook and other sites. But as the marketplace gets flooded with content, viewers grow increasingly fickle, with ever-shorter attention spans. Media makers struggle to make work that feels fresh, and to find audiences for it….

“The technical, creative, financial, and social aspects of filmmaking are tightly interwoven, perhaps more so than in any other art form. The more you understand about all these aspects of production, the better prepared you’ll be for the challenges of making a movie and getting it seen.”

He divides filmmaking into five major tasks: development, pre-production, production, post-production and distribution. I really like this approach, because it puts production – and post – into the much wider context of what it takes to create a film that an audience wants to watch.

I’ve learned, when teaching editing in high school, that students tend to jump right into creating effects. College students tend to jump into selecting shots and editing. Very, very few actually start with what is, essentially, the most important two questions: Who is my audience and what is my story? Chapter 2 is devoted to developing a story and turning it into a project. The story needs to be figured out first, based on your audience, before you get to the fun part of selecting the gear and “making movies.”

Smile… you need to eat your vegetables before you get desert.

The Handbook covers gear aplenty, however. Chapters are devoted to digital cameras, film cameras, lighting and audio, then shifts into techniques for production and post. I will probably never read this entire book. But that isn’t the point. There is value in every chapter, even if you only dip in to read a short section relevant to your situation.

To me, though, the last chapter is the most important: “Producing and Distributing the Movie”

“Making a film can be so difficult on so many different levels, it’s a wonder so many get made. You have to solve the artistic and technical challenges, find the money, then find a way to launch the movie into the world – all while sustaining yourself financially.

“Lots of problem-solving is needed, but the bigger problems are never solved. What works in one scene or one film doesn’t in another. Funding comes and goes. Styles and audiences keep changing. You build a team to make one film, then have to start over on the next one. As a business model, filmmaking doesn’t makes a lot of sense.”

The first edition was written in 1984. Then, as media evolved from analog to digital, from major studios to the desktop, this book evolved along with it. It strikes a difficult balance between providing practical advice on current gear, yet avoiding become too dated too quickly.

There are many things I like about this book, but probably the most important is that it can serve as a mentor to filmmakers. A good mentor provides a sounding-board and guidance as you struggle to solve a problem. A good mentor enables you to become a better filmmaker. This book is a mentor you can count on for thoughtful advice from someone who’s “been there and done that.” A book filled with practical wisdom that doesn’t need to be read cover to cover to gain insight.

Writing any book is hard. But creating a book that is comprehensive, readable and useful – that takes a gift. Don’t let the size intimidate you – “The Filmmaker’s Handbook” is worth adding to your bookshelf.